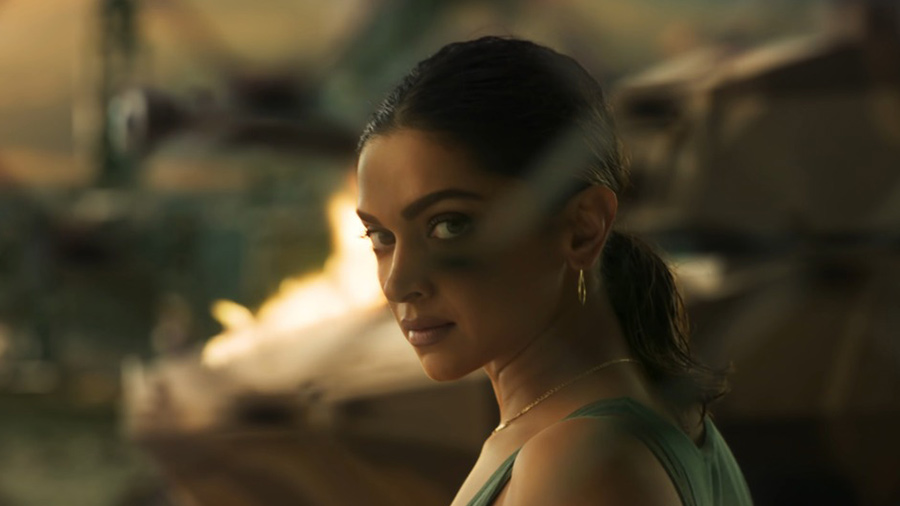 It’s Shah Rukh Khan’s comeback film after four years and yes, he kills it as Pathaan, but Pathaan is not just about Shah Rukh and John Abraham’s big showdown. Deepika Padukone — the female lead in a full-on action role in the Siddharth Anand-directed spy thriller — has turned in a jaw-dropping performance, ruling the screen as much as the two men. Here’s why Deepika alone is reason enough to watch Pathaan.

Deepika owns every second of her screen time

Alluring, agile, awe-inspiring. Enter, soldier-cum-doctor Rubina Mohsin. Deepika saunters in on the screen with the sizzling Besharam Rang song and with a swag to match Shah Rukh’s. Introduced as an ex-ISI agent, Rubina’s loyalty is dubious to say the least and Deepika never lets you make up your mind about which side she’s on – Shah Rukh’s or John’s. Her performance holds on to this ambivalence through and through, with the backstory of her character hinting at a traumatic past.

Deepika’s Rubina is a strong, combat-trained woman who doesn’t only look good but can land the kicks and punches as fast and as hard as Shah Rukh and John. Unlike Vaani Kapoor’s Naina in Siddharth Anand’s War (2019), Rubina’s drop-dead looks serve the purpose of not just alluring men but also getting her job done.

In her first action sequence, Shah Rukh’s Pathaan is a mere onlooker as a bikini-clad Rubina beats the goons to pulp. Deepika’s moves and manoeuvres are smooth and sharp. She jumps off planes and sends men flying in the air with her stunts with as much ease as her two male co-stars. Rubina goes one step ahead of Katrina Kaif’s Zoya from Ek Tha Tiger and holds a Gatling gun in the climax, and Deepika makes it feel as if she was born to do this.

Her chemistry with Shah Rukh

Deepika made her Bollywood debut in Farah Khan’s Om Shanti Om (2007) opposite Shah Rukh, and the two turned out to be a very successful romantic pair in Rohit Shetty’s Chennai Express (2013). Shah Rukh-Deepika’s chemistry in Pathaan, however, is starkly different. Here, neither of them trusts the other but are tremendously attracted to each other. The simmering tension between the two from the get go makes for a heady chemistry that shines through in the action sequences, especially when they are performing the stunts together. Some of their dialogues might sound borderline cringey though.

While most spy thrillers rely on female characters in tank tops and pants to balance the action and oomph quotient, Deepika’s style approach in Pathaan is completely different. Rubina is stylish and there’s a purpose behind her dressing in revealing clothes, and Deepika carries bikinis and combat suits with equal elan. Perhaps as an intentional addition by costume designer Shaleen Nathani, Deepika wears snake earrings towards the end of Besharam Rang, a symbol that hints at her questionable loyalty.

A lot is achieved through Rubina’s costume choices. A stunning black dress with a slit longer than Deepika herself is just as important to the story as are the combat suits and sleek jumpsuits for the action sequences. Deepika’s Rubina goes in and out of stunning costumes all the while retaining a powerful character.

The one good thing is that Pathaan is not overpowered by either of the two songs — Besharam Rang and Jhoome Jo Pathaan — and Deepika looks stunning in both. If she’s sensuous and enigmatic in Besharam Rang, leaving Shah Rukh’s Pathaan blushing to himself, she’s stunning and energetic in Jhoome Jo Pathaan where she matches steps with Shah Rukh and joins in on the celebrations. Both the dance numbers have Shah Rukh as the eye-candy and it is Deepika who makes a mark with her dance moves to Vaibhavi Merchant and Bosco Martis’ choreography.