Courage, hope and sensitivity define her audacious and inspiring on-foot journey, showcased in her film 'Women of my Billion' 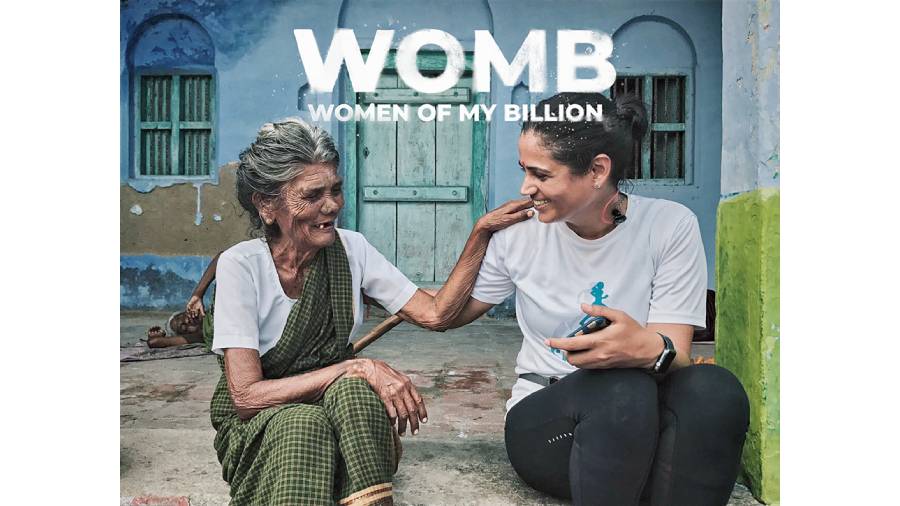 Srishti Bakshi’s story is an incredible one. In 2017-18, over 240 days, Srishti undertook a 3,800km on-foot journey from Kanyakumari to Kashmir to create awareness about violence against women. On her journey, Srishti met thousands in person, sensitising them to gender-based violence and inequality in the country. Her aim was to combat it by empowering women with confidence, leadership skills and most importantly, with digital and financial literacy that would allow them easy access to communication, information and financial independence.

Srishti walked an average of 30-35km a day, meeting anywhere between 150-200 people and following the walk with a workshop or a talk in the town or village she was passing through in the rural heartlands of India.

Srishti’s remarkable journey has been captured in the powerful and poignant documentary WOMB — Women of my Billion, which premiered at the London Indian Film Festival last month, and also at its sister festivals in Birmingham and Manchester. WOMB will also be screened at the Indian Film Festival of Melbourne as their opening-night film next month.

Srishti — who is a UN Women Champion of Change, Commonwealth Point of Light Winner and Young Connectors of the Future fellow — spoke to The Telegraph from London (she lives in Edinburgh) about the idea behind WOMB and her life-changing journey. Srishti is the founder and managing director of CrossBow, a social enterprise focused on relabeling impact funds, from donations to investments.

What was the response like to WOMB as the opening film of the London Indian Film Festival?

It was incredible! When you are part of a project like this, you are very close to it and you tend to see it again and again. But watching it on the big screen with a completely alien audience who have probably never heard of the journey when the journey was happening... it was just incredible to see the response. After the film, there was a deafening pause and then the whole auditorium resounded with applause, people were crying and women were coming up to talk to me... it was just surreal. I had these moments while I was on the journey, but experiencing it first-hand with the film was very unique.

The film highlights the true sentiment of the Indian woman, it’s her unique voice. We have met so many women and there are so many different mouthpieces. What’s remarkable is that they all speak in unison, they all speak the same language on the kind of violence they have faced. When you actually see it happening, it’s very different from reading about it.

This film gives you the state of mind to question a lot of things that you have probably heard before, but not paid that much attention to. There is a fatigue in India as far as hearing about violence against women is concerned... there is so much of it that people don’t want to react to it any more. This film gives you a trigger to reconsider your stand about this issue, and join this movement and do something about it.

What was the trigger for you?

For most of my life, I was an armchair activist. I would look at the news articles and it would anger me... I would take to the keyboard and just fire away on social media. Then there came a time when I was in Hong Kong and I was working there, and I heard about the Highway 91 case in 2015-16 where a mother and daughter were gangraped in front of the father in Bulandshahr. It just moved me to a degree where I lost balance that day... my mental balance was literally off the hook.

I am an ISB (Indian School of Business) graduate and a lot of my friends are in strong positions in the corporate world and outside and I spoke to them to understand their sentiments... I also spoke to my extended family. And the only thing I heard from them was, ‘Haan, yeh toh hota hain. So sad’. Everyone was like, ‘Move on!’ And I was like, ‘Will that 13-year-old be able to move on from this?!’ Her life had changed forever.

That was the trigger for me. I felt that if I didn’t use my education and work experience to do something about this, then I would fail the culture I had been brought up in and the love for my country that I have... my father is an Indian Army officer. I would have failed my father too, that’s what I felt at that moment. And I said, ‘I will do something about this’.

What made you want to walk the length of the country for this mission?

When you are very angry, then people say, ‘Go for a walk’. That’s what I decided to do... take a very, very long walk! (Laughs) To be honest, I was looking at different initiatives. I wanted to jumpstart conversations. Even after two-three years of doing this, you and I are talking because of that journey I made. I could have taken the route of joining a non-profit organisation and servicing victims of violence who need support.

But I knew that I wanted to do something where I am able to talk face-to-face with women. And the fastest way to do this was to meet them. It was a very meditative process of me arriving at this decision that I am going to walk. I could have cycled, I could have ran... I wasn’t an athlete, I was going to become one for this journey. But I felt that in India, specifically, if I spoke to anyone — from a four-year-old to a 90-year-old — they would say, ‘Yes, I am going to join you’. Had it been cycling or anything else, I don’t think I would have been able to involve so many people from different age groups and mindsets. For us, in India, evening walk is exercise! (Laughs) I knew that walking would strike a chord and make this conversation happen.

Is that what happened organically?

Oh yes! Wherever I was passing, people would come to know because media played a big part in spreading the word. We started from Tamil Nadu where we had a big opening and people would just start joining in. If I crossed a district, the principal of the school there would organise a workshop or talk in the school for me to interact with the students. Media in different cities would organise press club meetings for me. Organically, we did get a lot of support and we also had a very strong team in place. My work experience helped me to plan this journey to the T, and my father invested a lot of his energy and time into my journey.

Which stories moved you the most and what were the biggest challenges of this journey?

The challenge lay in hearing these stories. Physical exhaustion was, of course, also a challenge. It was a chaotic situation and I had so much to do in a day. There was no time to decompress. The biggest challenge was in meeting most of these women knowing that they were probably facing violence right at that moment in their homes. That face-to-face meeting with them was very, very hard. You will see that in the film... it took a toll on me.

But the highs were again the same, actually. Seeing their courage and witnessing life-changing decisions being made on the go was very empowering. I visited a small village called Deval in Madhya Pradesh, and that was the lowest point of my journey. I met this family whose youngest daughter had just been gangraped and burnt alive. It was one of the hardest days, not only for me, but for the whole team as well. I could see the cameraperson shaking. There was inconsolable crying in the vicinity. That case didn’t get national attention, but all that we could do was take their case to the National Commission for Women (NCW). After that, just coming back to where we were staying and recollecting and recounting that whole experience was terrible. I just started questioning what I was actually doing with this walk because I felt I could do nothing for her. That day, I just felt that violence had won.

But then the next day, I had to pull myself up and figure out how I could carry on this conversation at a different level. When I was walking that day, I was joined by many women, among whom was one who looked visibly battered. She had been beaten the previous evening. I didn’t ask her anything because I was anyway too emotional that day. At the end of the five-six kilometres that she walked with us, she came up to me and asked, ‘Aapko pata hain mere saath kya hua hain?’ I said I could understand and that she could join one of my workshops and talk to me. But then she told me, ‘Aaj aapke saath chal ke maine soch liya hain ki main ab aur yeh nahin sahungi’. That statement was so powerful. And I felt that if she got that courage through me, then I will continue walking. Those were the lowest and highest back-to-back days for me, and then there were many more.

What does one need to do to join your movement?

Just write to me! (You can visit https://womenofmybillion.com/). Cutting a cheque is the easiest thing, what we need from people is time. I encourage people to take out time, even an hour in a week, to help. It will make so much of a difference.