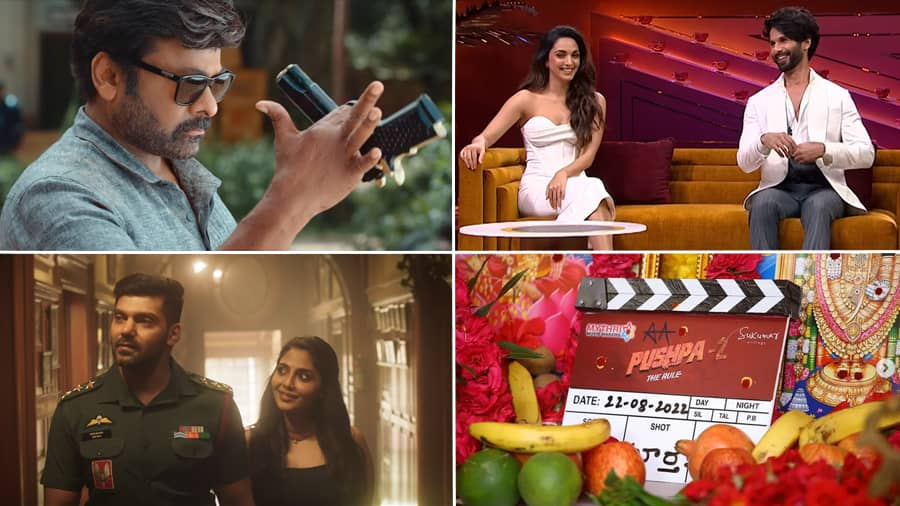 The makers of Chiranjeevi’s upcoming Telugu-language political thriller God Father dropped the film’s teaser on the eve of the south superstar’s 67th birthday. The film also stars Nayanthara, Satya Dev and Bollywood star Salman Khan. Billed as a pan-India movie, the film will be released in Hindi, Tamil, Telugu, Malayalam and Kannada.

The one-minute-33-second-long teaser serves as an introduction to Chiranjeevi’s character and other prominent cast members in the film. “Do you know who he is? He’s the boss of the bosses. Our one and only Godfather” plays as a voice-over in the background as Chiranjeevi is introduced.

God Father will arrive in theatres on October 5.

The makers of Allu Arjun and Rashmika Mandanna-starrer Pushpa: The Rise kick-started filming for the much-anticipated sequel to the blockbuster with a puja ceremony. Titled Pushpa 2: The Rule, the film also stars Fahadh Faasil in an important role.

Taking to Instagram, the makers of Pushpa, Mythri Movie Makers, announced the return of Pushpa Raj. “#PushpaTheRule starts off on an auspicious note with the Pooja Ceremony ❤️ Filming begins soon ❤️‍🔥 BIGGER and GRANDER 🔥 #ThaggedheLe 🤙 #JhukegaNahi 🤙,” they wrote.

Show host Karan Johar dropped a teaser on Twitter and wrote, “This jodi has everyone's hearts 'preeti' melted with their on-screen presence, but on the koffee couch they were as candid as they get!🔥.”

This jodi has everyone's hearts 'preeti' melted with their on-screen presence, but on the koffee couch they were as candid as they get!🔥 #HotstarSpecials #KoffeeWithKaranS7, Episode 8 streaming this Thursday 12:00 am only on @DisneyPlusHS!
@shahidkapoor @advani_kiara pic.twitter.com/7saZjzEOCV

In the short teaser, the actors are seen chatting with host Karan Johar about their co-stars. When Karan asks what Shahid misses about being single, he cheekily replies, “Apart from the women?”

Episode 8 of Koffee with Karan Season 7 will be available to stream on Disney+ Hotstar from August 25.

The two-minute-36-second-long action-packed trailer opens against the backdrop of an army base. Arya's voice-over explains the four steps the army follows while taking on perpetrators — identifying the enemy, finding their weakness, deceiving the enemy and finally, the fight. An area called Sector 42, which is devoid of any military activity or civilian activity for 50 years, suddenly becomes the focus point as people who went there have never returned.

Captain will arrive in cinemas on September 8.

The official synopsis of the film reads, “...Dedicated housewives whose lives revolve only around their husband and family, decide to take a trip together to Goa. Presenting the official trailer of Jahaan Chaar Yaar, hop on to the masti-filled and adventurous ride of our Chaar Yaars as they navigate through life, friendship, freedom & learn to love themselves.”

The two-and-a-half-minute trailer features several humorous sequences as the four actresses discuss their married lives before landing in trouble as they arrive in Goa. Girish Kulkarni also makes an appearance in the trailer as an uptight cop.

Jahaan Chaar Yaar will arrive in cinemas on September 16.