Advertisement
Home / Entertainment / Brahmastra doesn’t seem to have emerged out of a well-thought-out, solidly written script

Brahmastra doesn’t seem to have emerged out of a well-thought-out, solidly written script

Inspite of its razzle-dazzle, its power-packed cameos, its ear-pleasing music, its visual spectacle, the movie falls short 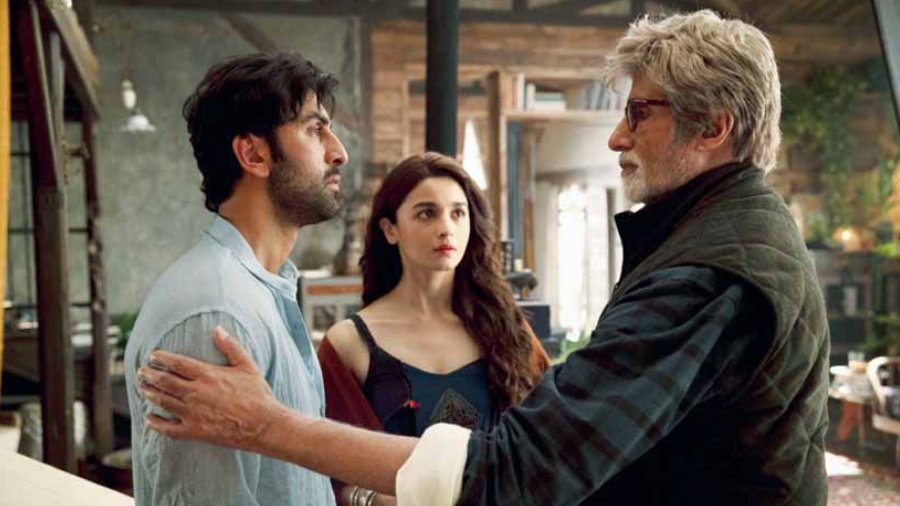 Beautifully chaotic’. Could the idea, which somehow also ends up becoming the core of Brahmastra, have originated from  its leading lady Alia Bhatt’s social media bio? Because the film — for all its razzle-dazzle, its power-packed cameos, its ear-pleasing music, its visual spectacle... all of which are its strengths more often than not — doesn’t seem to have emerged out of a well-thought-out, solidly written script. In fact, there is so much going on in Brahmastra —  a lot of it jaw-dropping and awe-inspiring, but also exhausting in some ways — that there is never the time to pause and feel the soul of the film. But time, maybe, is not the culprit here. The film, for all its sparkle, falls short when it comes to spark.

Which, in a way, is quite ironic because a spark is what sets off the action in this epic Bollywood fantasy, which has been close to a decade in the making and has been marinating in director Ayan Mukerji’s head for even longer. Fire is what propels our hero — a young DJ named Shiva, played by Ranbir Kapoor — to discover that he has a special, if rather minacious, connection to it. That is after he has landed up at a Durga Puja pandal, locked eyes across hundreds of heads with a fresh-faced, perpetually hair-flipping stunner (Isha, played by Alia Bhatt) and instantly fallen in love with her. Notes on her being rich and he being an orphan are quickly exchanged, and the most banal meet-cute in the history of cinema results in them realising within minutes that they are meant to be together. Together to sing songs, to stare into each others’ eyes, to milk a real-life romance/marriage for reel chemistry, to say ‘I love you (3000)’ more than your fingers can count... and also to take on the dark forces that threaten the very existence of mankind.

Brahmastra, the first in a planned ‘Astraverse’ trilogy, has the germ of almost every superhero origin story embedded in it. But Mukerji — through a lot of exposition and very little feel — aims to make the love story the core of the film.

Love is the greatest super power, paraphrased in many ways throughout the length of the film, is what Brahmastra wants to say. And so it is surprising that the script doesn’t really allow the romance between Shiva and Isha to develop in a way that would make us invest in them. For a film that runs close to three hours and hinges on the love story between its leads, there is hardly any time or scope afforded to a build-up of their romance. It almost feels like the film takes for granted that the viewer will mentally superimpose the Ranbir-Alia real-life romance on to the Shiva-Isha love story and start believing in it through a series of manufactured feelings and engineered emotion.

Which is really a huge disappointment because, otherwise, Brahmastra has quite a bit going for it. Let’s begin at the beginning with that outstanding Shah Rukh Khan cameo — no spoiler this, since everyone knows he’s in the film and something tells us that many will land up just to watch him.

The SRK trademarks of quick wit and wicked irreverence make this special appearance, which drew the maximum hoots from the audience I watched the film with on Friday morning, one of the best in a long time. To name his character Mohan Bhargava is also a clever hat-tip to Swades, and makes one realise, more than ever, how much we miss seeing the man on the big screen. It truly is the piece de resistance of the film.

SRK apart, the good thing about most of the cameos in Brahmastra (save for one, which casts a senior actor and gives her nothing to do) is that while they are definitely placed to bump up the film’s commercial appeal, they are also integral to the plot.

A few of those special appearances, in hindsight, should have been full-fledged roles. For Brahmastra sells too much repetition and propounds theories of its ‘Astraverse’ so many times that it leads to confusion rather than coherence, hence wasting screen time on narrative contrivances that seek to bog it down instead of letting it soar.

The Shiva-Isha romance plays out at the same time as Shiva starts experiencing debilitating visions, which leads the couple first to Varanasi and then to the Himalayas where they meet a secret society of guardians known as the ‘Brahmansh’, and headed by Guruji (Amitabh Bachchan, sporting rock-star hair) who are tasked with protecting the universe from the evil forces. Mouni Roy, in red contact lenses and looking like she has landed up straight from the sets of Naagin, is the leader of the dark forces, who wants to get hold of the potent weapon named Brahmastra and unleash catastrophic consequences.

The first half, to be fair, is pretty engaging with some extremely well-done visual effects. Mukerji roots his story firmly in Indian mythology, tempers it with an American superhero story sensibility and does well in just tiptoeing around religious references. That both Ranbir and Alia are solid performers has never been in doubt and the two do the heavy-lifting in Half One, which, despite its frequent tonal switches, sets up the action for a promising post-interval watch.

In Half Two, Shiva transforms from a reluctant superhero into a warrior comfortable with his identity, when he embraces his super power as his strength and stops fearing it as his kryptonite. Once that is done, Brahmastra simply degenerates into a film with a non-stop VFX onslaught. The last hour of the film is so stuffed with special effects — many of which are repetitive and lose their ‘wow’ factor after a while — that the story, despite teasing the second film in the trilogy and even naming it in the end, just becomes a combination of pyrotechnics and lasers.

The film also inexplicably gets trapped in clunky writing. Some of the dialogues are #facepalm amateurish, like when the Brahmastra is compared to a pizza in a scene which is not meant to be even remotely funny. Or when Guruji, alluding to his ‘fire power’ tells Shiva, “Main tumhein DJ se dragon bana doonga”. We aren’t sure what Hussain Dalal was aiming for with his lines, but most of them don’t land.

If the weekend rush is anything to go by, Brahmastra is all set to end Bollywood’s drought at the box office. Which is a good thing, because this is a film that deserves to be rewarded for its vision and its visuals. If only it also had a compelling story to tell. Game-changer at the box office, maybe (and we hope). But a bit of a missed opportunity this.