Bollywood and Tollywood highlights this week

Here’s a bunch of new releases, fitness goals and style statements to browse through 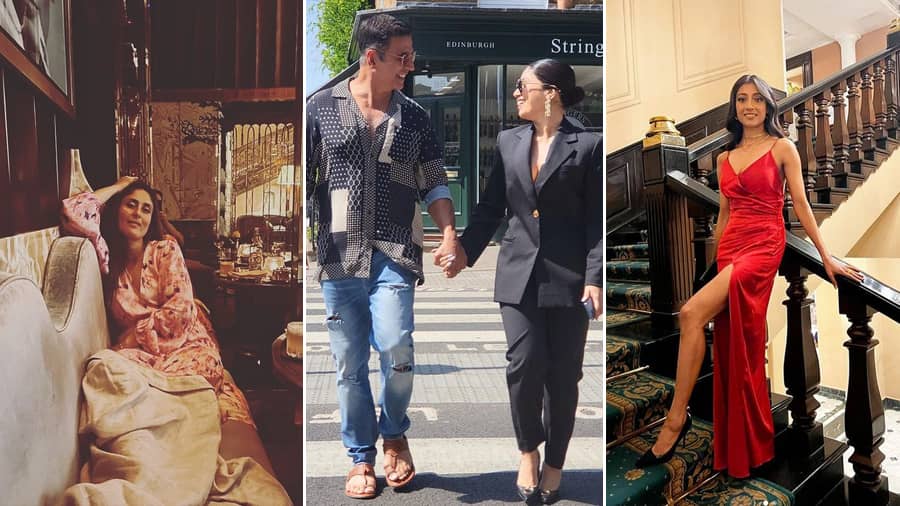 It’s been a promising week for both Hindi and Bengali film industries, with new releases hitting the big and OTT screens. Check out what some of your fave stars have been up to.

Before breaking the internet with his recent nude photoshoot, Ranveer Singh wrote on his Insta handle: “Had to give up Malpuas”. The actor shared a glimpse of his abs as “#MondayMotivation” and we are taking all the inspiration to hit the gym ASAP. Ranveer will be seen next in a double role in Rohit Shetty’s Cirkus, and in Karan Johar’s Rocky Aur Rani Ki Prem Kahani.

Now that she has returned to Mumbai after a long family holiday with husband Saif Ali Khan and kids, Taimur and Jeh, Bebo aka Kareena Kapoor Khan is all set to rule the charts (and hearts) once again. The actress shared a pic and wrote: “Get to work… Mumbai I am ready for you…” Kareena will be seen next in Laal Singh Chaddha opposite Aamir Khan and in Sujoy Ghosh’s untitled thriller.

Announcing his next production, the filmmaker and Koffee with Karan host wrote, “@shanayakapoor02 @gurfatehpirzada @itslakshya all set to storm the screens next year! Shooting commences first half of next year!!!! #BEDHADAK!!!!” The film will mark the debut of Sanjay Kapoor and Maheep Kapoor’s daughter Shanaya Kapoor, and will be directed by Dhadak director Shashank Khaitan.

Akshay Kumar and Bhumi Pednekar, the lead pair of Toilet: Ek Prem Katha, are back with their next film, Raksha Bandhan, releasing on August 11. The Samrat Prithviraj actor shared a photo of crossing the road hand in hand with his leading lady.

A short poem in the caption and a video of working out hard — Sara Ali Khan’s fitness regime is sure to inspire many. The actress is gearing up  for Laxman Utekar’s untitled project and Gaslight by Bhoot Police director Pawan Kriplani.

Are you a Byomkesh lover? Then, Abir Chatterjee has some good news. “He is coming back after 4 years… Here’s the teaser of #ByomkeshHotyamancha, in cinemas this 11th August.” Can’t wait? Ditto!

The actor-filmmaker will soon be seen in Raja Chanda’s Bibaha Bibhrat with Abir Chatterjee and Lahoma Bhattacharya, who debuted in films opposite Jeet in Raavan this year. Parambrata was recently in London for the screening of Abhijaan — which he had directed — and Ghore Pherar Gaan.

Looking for a monsoon hair makeover? Take a cue from Raima Sen’s highlight tresses. Dressed in white with minimal makeup, Raima shares a quick lookbook and we are busy taking notes.

Last seen in Habji Gabji with Parambrata Chattopadhyay, Subhashree Ganguly will be back with the Indraadip Dasgupta-directed film Bismillah. The ensemble cast of the film includes Kaushik Ganguly, Riddhi Sen, Gaurav Chakrabarty and Surangana Bandyopadhyay. The film releases on August 19.

Byomkesh Hotyamancha actress Paoli Dam is amping up the weekend vibe in a slit gown from Sixth Avenue Store, paired with a layered neckpiece, hoops and shimmery eyes.

Travelgram, check. Travel fashion, check. Gourab Chatterjee’s recent holiday in the US is making us yearn for one. In a cool black tee, quirky sneakers and comfy shorts, he’s got the summer look spot on.