Advertisement
Home / Entertainment / Bewildering has never been this dazzling

Bewildering has never been this dazzling

In Tenet, Christopher Nolan, the ultimate big-ideas guy in the world of big-ideas cinema, employs the theme of inversion and crafts a film that is visually spectacular 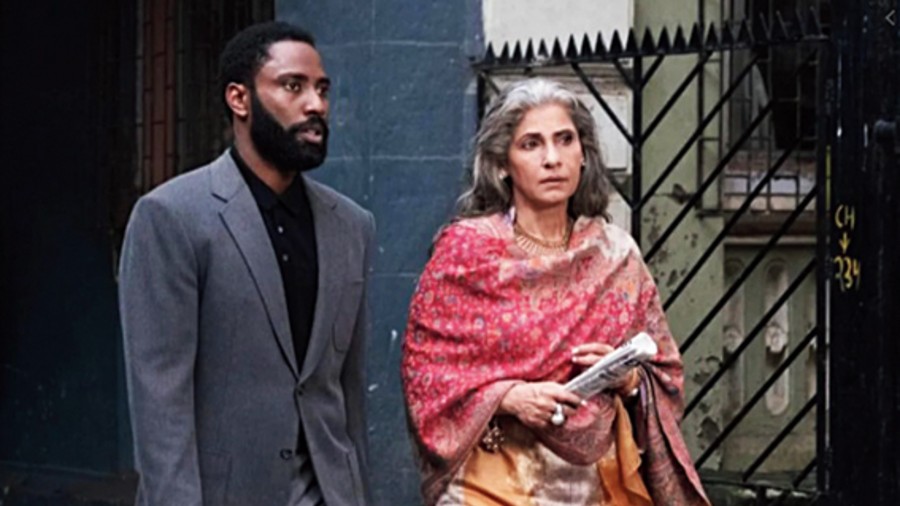 Tennet is a big-screen spectacle that doesn’t deserve to be watched on a mobile phone
Sourced by the correspondent
Priyanka Roy    |   Published 04.12.20, 01:03 AM

If the three seasons of the German series Dark twisted and turned your grey cells in ways they hadn’t been before, then Tenet simply smirks and says, ‘Hold my beer’. Or rather, ‘Beer my hold’. In Tenet, Christopher Nolan, the ultimate big-ideas guy in the world of big-ideas cinema, employs the theme of inversion (hence, my feeble attempt at one in the previous sentence) and crafts a film that is visually spectacular, but also one that is not always easy to comprehend. Sometimes, that’s pretty deliberate, and very often by design. To put it simply, Tenet is Nolan’s most Nolan-esque film. It fits right into his oeuvre and is wildly original, but it’s also far more self-indulgent than any of his previous work. The big question: is it his best? No.

First things first. Size does matter, and Tenet proves that. Shot on 70mm — Nolan’s preferred gauge — this is a big-screen spectacle that doesn’t deserve to be watched on a mobile phone. I watched Tenet about 10 days ago at a very private screening, and though the community viewing feel was missing (social distancing is pretty easy when there are only two people in a 200-seater auditorium), I was blown away by the sheer audaciousness and ambition of Nolan’s scale and storytelling as he mounted one massive set piece after another to deliver a labyrinthine watch that hooks but doesn’t always keep you engaged.

It’s tough to bracket Tenet into a genre, but in terms of theme and treatment, it’s closest to Nolan’s Inception, all the while touching on riffs that we have seen before in both Interstellar and Memento. The film-maker has always been fascinated by the brain-bending concept of time travel, and yet what we get in Tenet is not classic time travel. It’s, in a way, a typical spy caper, much in the mould of Bond, frameworked within a time-twisting sci-fi film. And even that definition may not be up to scratch.

The first few minutes of Tenet will, in fact, remind you of Nolan’s Dark Knight films. The film opens with a breathless, fast-paced mission during a terrorist siege at the Kyiv Opera in Ukraine, and parachutes the protagonist (simply known as The Protagonist through the film), played impressively by John David Washington, into an operation called Tenet. It involves technology that can reverse an object’s entropy. This is presumably being used both in the present and in the future to invert time and space in ways unimaginable, and it has the means to spark off World War III and potentially end the world. That sets off The Protagonist not only on a globe-trotting mission, but also back and forth in time, enabled by temporal pincer movements.

If you aren’t reading this review fearing spoilers, then let me assure you that this apprehension is unfounded. It’s virtually impossible to describe Tenet, and even repeated viewings of this carefully mounted puzzle will boggle even the most devout Nolan fans. In many ways, Tenet is a Rubik’s Cube convoluted in a way where you feel that the colours align seamlessly at a point, only to have the film throw something at you the very next minute that you really can’t fit in, and you need to start all over again. “Does your head hurt yet?” Robert Pattinson’s debonair agent Neil asks The Protagonist at one point. That perhaps best sums up the film. But curiously, often reaching a dead end doesn’t feel all that exasperating because Tenet delivers a cerebral spectacle unlike anything one would have watched in recent times.

Neil is one of the more interesting characters in Tenet, and Pattinson plays him with a kind of old-school nonchalance that we get to see in the agents of classic spy films. Neil’s interactions with The Protagonist, a budding bromance of sorts, will tease a smile out of you. The two rappel their way into a highrise in Mumbai, and out comes Dimple Kapadia’s Priya in a part that’s not only meaty and with meaning, but also feels tailormade for the ageless actor. Filling out the film’s other female part of consequence is Elizabeth Debicki’s Kat, married to Russian oligarch Andrei Sator (Kenneth Branagh), the man with the key to the apocalypse that The Protagonist, in sharply cut suits much like 007, is racing against, with, before and after time to prevent.

Tenet is meant to be a larger-than-life, big-screen wallop and it delivers spectacularly on that front. Whether it’s a jumbo jet crashing into an airport building in Oslo (no, it’s not computer graphics) or that jaw-dropping inversion sequence involving cars which reportedly made Nolan shut down a highway in Estonia for weeks together, Tenet doesn’t fall short when it comes to scoring with moments that will make your eyeballs shoot up to your eyebrows. Hoyte van Hoytema — the man who has also shot Nolan’s Interstellar and Dunkirk — excels.

Though Tenet addresses themes of destiny and karma, and even touches upon the world of the future that our callousness in the present is leaving for those after us, this is a film where emotions are not given enough space to develop even when the set-up is well and truly there.

As it plunges deep into a breathless and breathtaking climax, Tenet flirts with growing inscrutability, but there’s something heady about watching soldiers race forward and backward in time to acquire an algorithm to save the world.

And that’s what Tenet essentially is: a heady ride, but not one that will always make sense in your head. Bewildering has never been this dazzling.