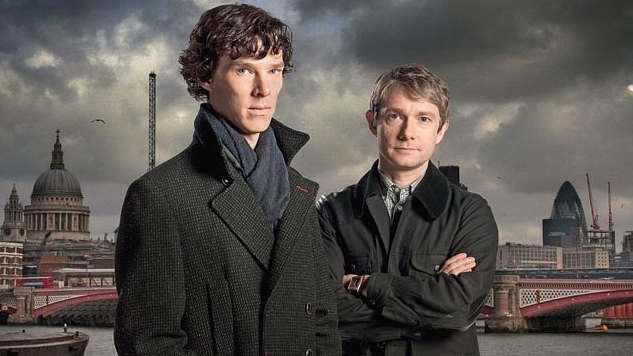 Growing up, the name Sherlock Holmes would immediately bring to my mind a visually rich image. A sleuth running across the bustling streets of 19th century London, obsessing over his cases and resorting to drugs in their absence, being both the object of admiration and annoyance in Dr. Watson’s books, and intriguing everyone with his intelligence and eccentricities. The image still remains extremely vivid and retains the core parts of his personality, although Sherlock now resides in 21st century London, wears nicotine patches and appears in John’s blog. Purists might say that this isn’t the Sherlock Holmes from Sir Arthur Conan Doyle’s legendary novels. However, I feel that nothing elucidates the strength and timelessness of Sir Arthur’s stories like Sherlock, the BBC show that proved that the character would continue to inspire awe from audiences globally, no matter which era he was represented in.

A decade ago, when the drama aired its pilot, no one had any idea how big it would become. But, the game was on. Not only did it transform the way the sleuth was traditionally viewed, but also introduced a new generation to his adventures. We couldn’t resist re-examining why the Peabody-winning pilot, A Study in Pink was such a breakout hit, as it turns 10 today.

The show began by subverting conventional narratives, with John Watson getting a far more central arc than Sherlock. If anyone would have ever told us that the well-built and moustached Dr. Watson would be played by Martin Freeman (his claim to fame was Tim from The Office UK), we would have laughed. However, there was something about Freeman’s awkward, timid (and moustache-less) John that made him instantly endearing. Freeman’s portrayal went on to be so iconic that even today, a Google search of ‘Dr Watson’ is full of images of the actor.

Anyone living in India is not alien to grand protagonist introductions (courtesy Bollywood). However, there was something inexplicable that made it particularly hard for us to take our eyes off the screen, when we first saw Benedict Cumberbatch. Be it his thick mane, intent stare or Alan Rickman-esq baritone, we were sold on his casting in mere seconds. Not only did his first scene as the consulting detective go down in history as one of the greatest character introductions in pop culture, but his long monologues of deduction and his enthusiasm for a new case were reminiscent of the sleuth’s awe-inspiring scenes from the books, without seeming dated.

Right from the start, Freeman and Cumberbatch had undeniable chemistry, with the former’s restrained and diplomatic Watson being a great foil to the excitable and self-obsessed Sherlock. Not only did the two actors feed off each other’s energy in tense scenes, but surprisingly turned out to be an excellent comedic duo, with their obvious intellectual and emotional gap leading to organic laughs, but never becoming a caricature.

No literary adaptation is complete without references to its source material, and Sherlock gave long-time fans plenty to obsess over. Apart from having many references to the novels including the duo’s iconic address, 221B Baker Street, their meeting through a mutual friend, Sherlock’s unique designation as a consulting detective and a surprisingly fit Mycroft, the episode also had something for loyalists who had read A Study in Scarlet, the novel which loosely served as the pilot’s inspiration.

The show-runners couldn’t have chosen a better case than A Study in Pink for the introductory episode. Not only was it elementary enough to suit people who were new to the characters, but also had plenty of new additions and modifications to keep long-time fans on their toes, something that adaptations over the years have…