‘It is 2017. Feluda uses a smartphone, a smartwatch. Feluda is modern... but The essence of the story remains the same’, says the director 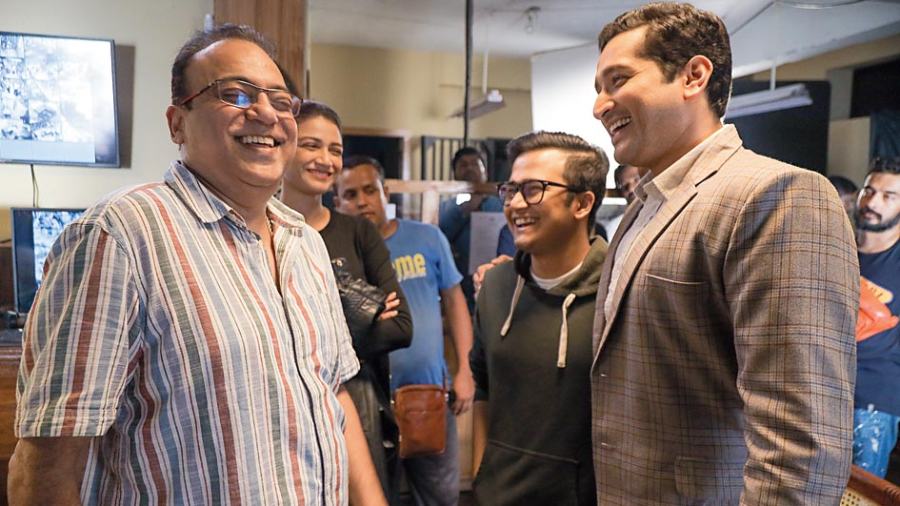 His first film, Aborto, was a homage to Satyajit Ray. And life came full circle on August 30, when Arindam Sil started the shoot of his first Feluda web series — Gangtoke Gondogol. “It’s been a dream come true.... and a very long process. The scripting and other logistics took more than two years. Gangtoke Gondogol is a Zee 5 web series of 10 episodes,” smiles Arindam. The Telegraph chat with Arindam Sil.

What are your childhood memories of reading Feluda stories?

It was my birthday, and I got the Feluda story books as presents when I was in Class V or VI. I started reading more. Then I watched Sonar Kella in the theatres and I was awe-struck. Then I started watching the Ray films.

Did you tell Sandip Ray about your desire to direct a Feluda story?

I had met Babuda three-four years ago and I had told him about my wish. Now he knows that I am directing this, and he is looking forward to it.

Having successfully directed Byomkesh, Shabor and Mitin Mashi films, how do you see Feluda?

This Feluda series is set in 2017, we have contemporised it. But the essence of the Feluda story highly remains the same. Feluda is larger-than-life here... Satyajit Ray initially started writing Feluda stories for children. Later he realised it can be turned into cinema.... In this series, Feluda uses a smartphone, a smartwatch and takes the help of Google. Feluda is modern and contemporary. But we are also saying that the knowledge that we acquire through reading books  is paramount. It is irreplaceable. Feluda visits Sidhu Jetha and he has his discussions with him. We have seen Feluda doing yoga. Now he cycles too.

There is a lovely backstory and we have added two new characters. Sauraseni Maitra plays an IB officer and Rajatava Dutta plays an important character.

By giving Feluda a smartphone, do you also think about how a certain section of fans might react to it?

I am making this series for the new generation. My biggest tribute to Ray would be if more young people start reading the Feluda stories. I am making a smart presentation. I’ll reach out to them.

Parambrata Chattopadhyay had played Feluda before. Was that in your mind while casting him as Feluda?

Param as Feluda in Gangtoke Gondogol is superb. Rwitobroto Mukherjee plays Topshe. Param fits the bill perfectly. Feluda has a certain kind of innocence, which we feel has come out brilliantly in Param’s look as Feluda. His clothes have an earthy tone.

What were your thoughts on casting for Topshe?

I thought of Rwitobroto immediately. He had worked with me before in Durga Sohay. I had a very good experience of working with him, and I like him as an actor. He is a very intelligent actor.

You had worked with Ritwick Chakraborty before in your Byomkesh films....

Ritwick Chakraborty is a versatile actor. I was really looking forward to working with him and the moment I got the opportunity, I felt it was the right moment to cast Ritwick as  Sashadhar Bose. Rudranil Ghosh plays Nishikanta Roy. I am playing a very important character, Sadasiv Selvankar. We’ll be shooting the series in Kolkata and Sikkim. The music of the series is by Bickram Ghosh.

What can the audience expect from the series?

Every episode will be incredibly thrilling. I can promise this. And it will have the feel of a travelogue. It will be a visual treat.