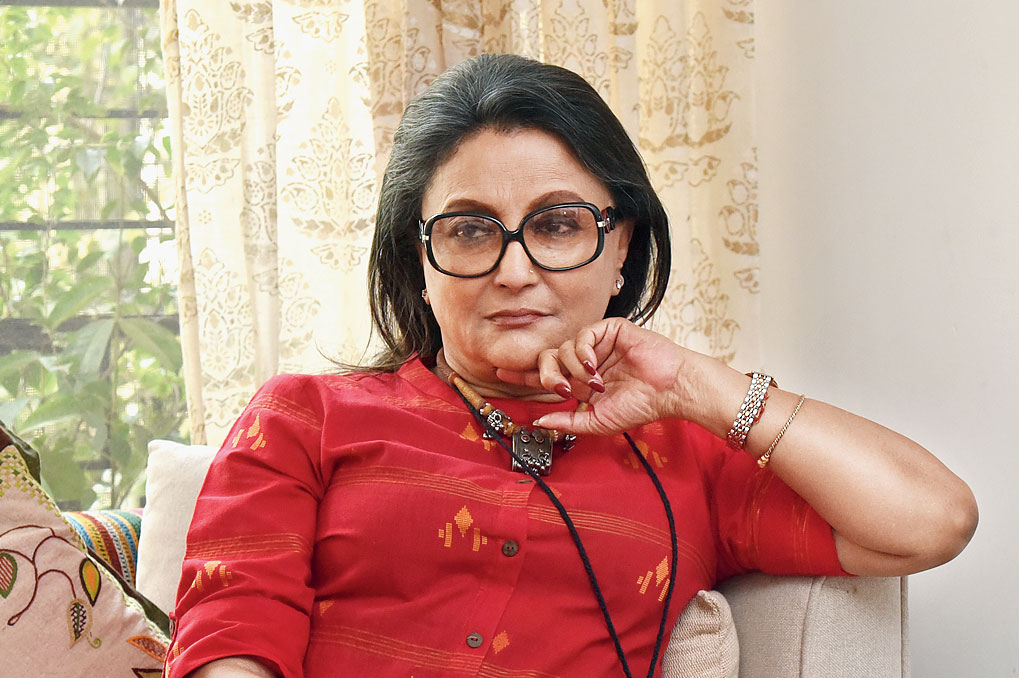 In 2018, her birthday (October 25) was a working day for Aparna Sen, who was busy shooting her film Ghawre Bairey Aaj, a modern adaptation of Rabindranath Tagore’s iconic novel Ghare Baire. “We were in Delhi and everyone got me a cake,” recalls Aparna fondly. This year she was with family and friends. A t2 chat with Aparna, whose film releases on November 15...

What was your first impression on reading the novel Ghare Baire?

I read the novel first and then later watched Manik Kaka’s (Satyajit Ray) film. Incidentally, he had once told me... in the late 1970s... that he would cast me as Bimala. But finally it didn’t work out for whatever reason. Shei obhimaan ta amar chhilo and Manik Kaka was indulgent about it, saying, ‘Hyan, o toh obhimaan kortei paarey.’ But ota boro kotha noy.

We have inherited both Rabindranath Tagore and Satyajit Ray. We love them and we respect them and we adore them, so we also have the right to critique them.

In my film, I have focused on the friendship between Sandip and Nikhilesh. This friendship is really important. They are poles apart as far as their politics goes… in spite of that they are very good friends. I have shown Sandip doing various kinds of politics and going through various ideologies in college to arrive at where he has, which is more of a Right-wing stance.

How did the idea for the story come to you?

Gauri Lankesh’s death… I could not sleep that night. Then I had a dream early in the morning. The dream was about a first-time filmmaker, a fan of Satyajit Ray, making Ghare Baire in a modern setting. I woke up and I realised it is crying to be made into a film. For a long time people had been telling me to do a film based on a Tagore story. I had thought of making Gora but it is very difficult to make, especially if you set it in that period. And then who do you cast as Gora? That is another problem. I haven’t tackled Gora yet… I don’t know if I will. There is a lot of theory and discussions in Gora. It is full of debate. It might not work that well as a film.

And then I realised it was me (referring to the dream)… because every film that you finally make is your first film. You approach it as your first film. Of course you have the experience. But still… all the preparation, excitement… you should make it like your first film. You should have that sort of an involvement. Initially, I thought of making it like a film within a film… like the young filmmaker is making a film. But then I thought it was unnecessarily complicating the plot. The film is long enough in any case, because there is so much happening. I did not want to make it longer.

Nikhilesh’s character is modelled a lot on Gauri Lankesh…

Bimala is a Dalit girl in my film. Bimala, in the novel and in the film, had been completely sheltered. Now in our day and age a girl is not completely sheltered. She comes from the coalmines of Jharia at age eight or nine... which is why she has not been exposed to the world. Then she went to an all-girl’s boarding school and college. Therefore she led a sheltered life. I have also made her much younger. I made her about 12-14 years younger than Nikhilesh. I thought that unless she is very young and impressionable she would not be taken in by Sandip. Her ideas have been formed by Nikhilesh. But she has a mind of her own. She is intelligent, she can argue. She is impressed by Sandip... the way he talks, his conviction, charm. And Jisshu (Sengupta) has got that in ample measure.

Why cast Tuhina Das as Bimala?

I am glad that I cast somebody who was not too exposed. I wanted somebody with very little exposure, who would not be carrying a lot of baggage of associations. We did an audition and look test… and we did massive workshops. I worked on her. She gradually got into the role. Her name is Bimla in the film and these guys give her a new name… Brinda. Bimla did not get to learn Bengali very well, because these people were living in Delhi. Bimla comes from Jharia and grows up in Delhi. That explains her diction. And she is put into a boarding school where they also don’t speak Bengali. Because she is married into a Bengali family, therefore she learns Bengali. But she has a Delhi kind of a diction.

How are Jisshu and Anirban’s approach to acting different?

Anirban is a very thoughtful actor, who attended workshops. Jisshu is much more immediate. We aged Anirban rather well. Nikhilesh comes from an elite family. He went to Oxford to study and stayed there for many years till he came back. He has got a bit of an accent. And Sandip Jha comes from Bihar. He comes from a traditional Bihari family. He rejected it and became extreme Left. And then he becomes extreme Right. People who tend to go to extremes can go to either extreme. He had spent a lot of time in Nikhilesh’s family. He was obviously influenced by their family a lot. But you tend to revert to your childhood background. There are a lot of reasons why he comes back and how he changes.

Did you find the process as enjoyable when you had directed your first film?

I had a tough time because I fell down. I cracked my kneecap. What I didn’t realise was that I also hurt my spine. I saw doctors during Puja. I was given a brace from ankle to thigh. I had to keep my legs straight the whole time. After that I went to shoot in Delhi, and I was shooting sitting on a wheelchair with my leg propped up. This happened for the first time. I was also going around with a walker. This is how I managed. My pet name is Rina and, in fact, Sohag (Sen) christened me BalleRina because I had to keep the leg straight and up and then down while getting into the car (smiles). There was no other way. I had to get my leg into the car without bending it. Everybody was so helpful.

What is it that drives or inspires you to make more films?

It is the only thing I know (smiles). Of course, I write. I have stories to tell. But I don’t want to do superficial stuff any more.

You have never done that…

You are absolutely right. The least serious was Iti Mrinalini. But nothing else. Everything else that I have done has been serious.

I don’t think I have too many filmmaking years left since I hurt my spine and knee. I have very, very good genes. I am grateful to my parents. Doctor said that I healed because of a lifetime of doing yoga. I am hoping to start something in March in Hindi.

If you had to pick a film of yours that you directed, which one would that be?

36 Chowringhee Lane has become a mini classic. People seem to like Paromitar Ekdin a lot. My personal fave is The Japanese Wife, because I think I achieved a lot of what I wanted to do. I wanted that Japanese minimalism in the film, which I managed to get somewhat. Arshinagar I feel was too early for its time. A lot of people I highly respect liked Arshinagar.