Advertisement
Home / Entertainment / Anurag Kashyap gets candid with The Telegraph

Anurag Kashyap gets candid with The Telegraph

‘I am now doing things I want to do... things for myself’ 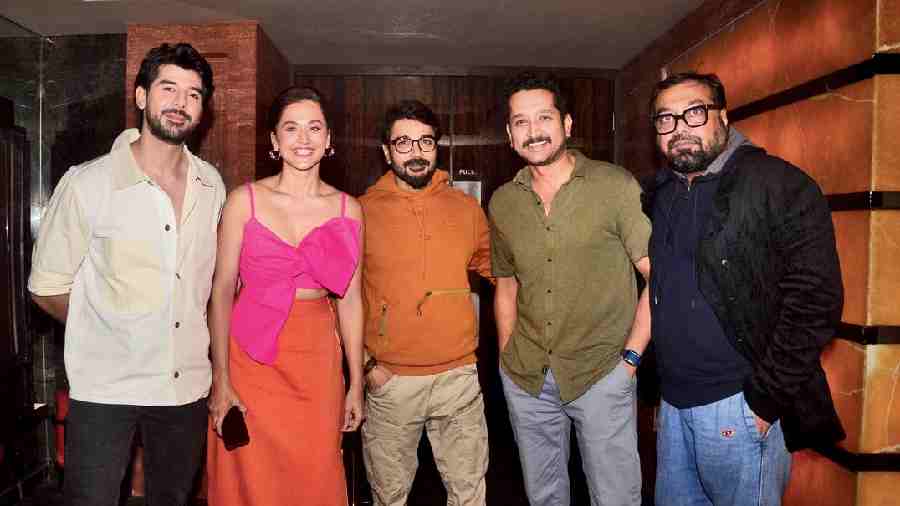 Anurag Kashyap wasn’t feeling well on the day his film Dobaaraa, now playing in cinemas, screened in Calcutta last week. But after a hearty dinner of biryani from Royal Indian Hotel and chicken chaap from Arsalan, the film-maker — who has never shied away from saying it as it is — made time for a chat only with The Telegraph. Here’s what we spoke about.

Despite being an official adaptation, Dobaaraa is a departure from Mirage, in a good way...

I have simplified the film and made it for an Indian audience. I didn’t want people to get stressed while watching the film. I didn’t want them to keep scratching their heads thinking, ‘Yaar, yeh parallel universe kya cheez hain?!’ Ab agli picture mein aur thoda risk lunga.

Is it still necessary to simplify things for the Indian audience? I thought we had gone past the days of dumbing down films for our viewers...

I wouldn’t call it dumbing down... for me, it means reaching out. If you watch (Christopher) Nolan’s movies with a lot of attention, you will find that he explains everything in the movie itself, and then makes the audience feel intelligent when they manage to decipher his films! (Laughs) That also gives him the freedom to do things. Obviously, we are not at that level... hum toh Nolan ke ‘No’ tak bhi nahin pahunche hain (laughs). With Dobaaraa, the idea is to reach out. I have had that ego in the past... ki main nahin samjhaunga. As I am ageing, that is going away...

With age, have you mellowed in every aspect?

I don’t know! I thought I had mellowed but the reactions to my recent interviews have made people say, ‘Yeh aadmi kabhi sudhar nahin sakta!’ Honestly, I just talk honestly. I am not angry...

Honesty is not appreciated in today’s times...

No it isn’t. Honesty is like... how dare you be honest?! Nowadays, you just give an opinion and everything becomes a conspiracy. Look at Mr Agnihotri (Vivek Ranjan Agnihotri, the director of The Kashmir Files). I just spoke casually and said that I hope The Kashmir Files is not sent as India’s entry to the Oscars... that’s because it’s a completely agenda-driven film. And it just blew up!

You are less outspoken now in terms of your politics...

What’s the point? The people of this country have bought into a dangerous notion blindly... I can’t change that.

Before Dobaaraa, had you come close to ever trying your hands at a remake?

Dev.D was Devdas (smiles). It was a remake on some level. In the case of Dobaaraa, I actually read the script... Mirage hadn’t even been released when Taapsee (Pannu) gave me the script to read. Mirage didn’t even exist then, so there is no question of me remaking a film. I simply saw a script like I do for all my other films, and I adapted that script. Which is why Dobaaraa seems so different from Mirage.

But now Mirage exists and it’s available on a streaming platform for everyone to watch. So comparisons are inevitable...

It doesn’t matter. A lot of people tell stories that they feel the audience doesn’t know about. Infernal Affairs was adapted into The Departed aur (Martin) Scorsese ko Oscar de diya. The original film never won anything!

In India, we are far too obsessed with yeh film yahan se copy kiya hain, wahan se adapt kiya hain. We bought the script and made it into Dobaaraa. But in India, most people will say it’s a copy. And this is a country which copies everything... here people even wear fake jeans!

I don’t care about these things. I enjoyed making this film. I am now doing things I want to do... things for myself.

Was the experience of making Dobaara different from your other films?

Yes! Very difficult! Difficult in the sense that I had to understand the film first to make people understand it (laughs). For me, the whole exercise of making this film was about constantly putting it together in my head.

Taapsee brought the script to you...

Taapsee and Oriol Paulo (the writer-director of Mirage and also of The Invisible Guest, which was adapted into Badla and starred Taapsee) have a very strange relationship! Even before Oriol Paulo comes up with the title of a film, Taapsee gets the script! (Laughs) When Taapsee got the script of this film, it was called ‘During the Storm’... it wasn’t even called Mirage!

Did you watch Mirage finally?

I did... much after making Dobaaraa. I was casually watching the film without knowing it was the Spanish original of Dobaaraa... ‘Arre, maine yeh toh kahin dekha hain.... oh achha, yeh toh humne banaya hain!’ (Laughs)

Bollywood films are flopping left, right and centre. How much does box office mean to you?

What matters to me is that no one should lose money in a film. This film has already recovered its cost... so I am happy. With this film, in terms of the experience of making it, I have got more than what I asked for. Baaki sab toh distraction hain... woh chalta rahega.

If films are flopping, the industry needs to rework itself and its point of view, right from the production to the exhibition. From the price of popcorn to the fees of actors and directors, everything needs to be reworked. That is very essential if the Hindi film industry needs to survive.

Also, people have no money to spend at the movies... they would rather keep that money aside for something else in these uncertain times. The parallel economy that came to the country’s rescue during the last recession, won’t do anything now... they will hoard money. A a result, spending power is gradually going down.

So why doesn’t the industry do an overhaul, especially after the huge debacle of Laal Singh Chaddha?

Everyone understands what’s happening, but everyone is just looking out for themselves. Everyone is self-serving.... Till the time they don’t get an even bigger jolt, they won’t learn their lesson. Sometimes life has to be really tough and kick people in their asses  for them to realise their mistake.

How do you explain a Bhool Bhulaiyaa 2 doing such huge business?

I am so happy Bhool Bhulaiyaa (2) worked. That’s good news for the industry. I am not going to sit here and say that a good film should work and a bad film shouldn’t work. In these times, anything that works is good... anything that brings in money and that helps the industry to survive and thrive.

The big mistake that people in the production-exhibition business are doing is that they are increasing prices thinking that they will make a big profit. Yeh ulti soch hain.... Price aasmaan ko chhuyegi toh audience gayab ho jaayegi. We have to work backwards, we all have to take some hit for us to survive together.

Do you think the notion of the superstar in Hindi cinema is now dead?

It was bound to happen. People will stop going (to see films) for superstars. We talk so much about pan-Indian films now. This is not happening for the first time. Mani Ratnam and Shankar have been doing pan-Indian films for ages. But each time, after a few films, this notion has disappeared. One or two big films work and everyone starts making big films without even knowing what’s going into the making of these kind of films.

If we don’t overhaul now, we will come to a stage when we won’t have money to make normal films, forget pan-Indian films....

I haven’t watched Laal Singh Chaddha and so I can’t say why it didn’t work... the people involved in the film will have to figure that out. But no one has a formula for success. To think that Aamir Khan has a formula every time his film releases is a false expectation that you thrust on the person... and with time, that person starts believing that. The day everybody starts thinking they are invincible... toh girna toh teh ho jaata hain na?

For me, this situation is not new. I have faced it for 30 years now... it didn’t need a pandemic for me to struggle with releasing my films. Whether my film will release, how many theatres will it release in, how many people will watch it... yeh toh mera lifetime ka problem raha hain! Audiences never went in to watch my films in the first place anyway! (Laughs)