Anindita Bose on her unforgettable experience in Ray

‘Kissing underwater looks extremely romantic and beautiful but in reality it is not quite practical!’ 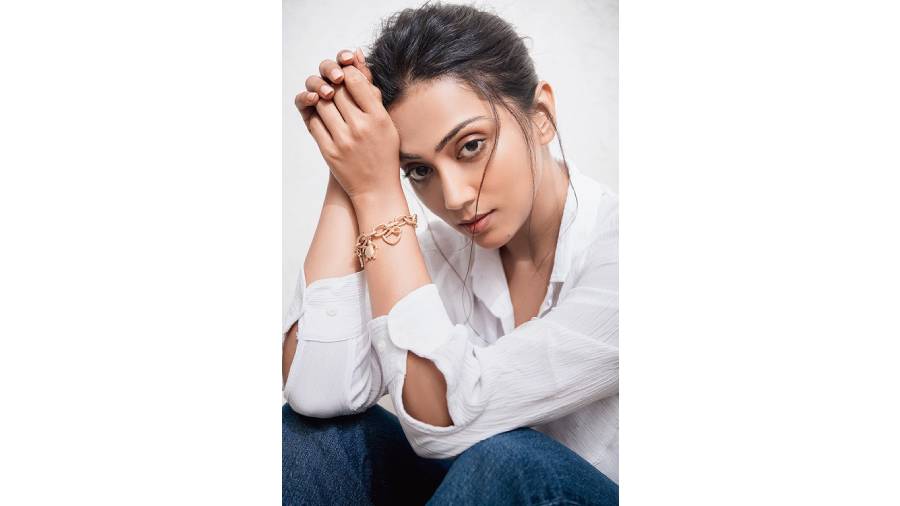 You know, I just wanted to come over and say hi, that’s it. Okay? Bye!’ This is how Cave Girl aka Rhea Saran signs off on the phone, leaving the sharp, confident, successful Ipsit standing alone, confused and lost in thought at a posh Bombay nightclub in Forget Me Not. Anindita Bose, who plays Rhea, had said ‘hi’ to the film world more than 10 years ago, and each time she has left an indelible impression on the audience through her performances. Same has happened with Forget Me Not directed by Srijit Mukherji, a part of the Ray anthology! Her phone hasn’t stopped ringing since Ray started streaming on Netflix. A chat with Anindita...

Let’s start with the opening sequence. The camera follows you as you enter the nightclub, and since it is a long take, we start to derive different meanings out of it — is she there to meet a friend? Is she looking for someone? Who is she? A mystery girl? A girl on a mission? What was going through your head while taking the walk?

Rhea Saran is a workaholic. A confident woman. She has had an extremely busy day and all she wants to do is have a drink by herself and unwind. Will she bump into someone or meet someone? She is still unsure. But as Anindita Bose, I knew this is the opening scene. This is where the mood of the film is set. So I knew I had to carry a kind of grace while walking, which will keep the audience engrossed. I knew how important that walk was.

What were the instructions from Srijit for that walk?

All he said to me is, ‘Be as alluring, be as graceful, and poised as possible.’ And that’s it. I got my cue and I knew what I had to do. Of course this was possible to understand ’cause I have worked with Srijitda before, so I knew exactly what he wanted from me.

Once you enter the passageway that is illuminated with bright yellow lights, it actually feels like you are walking through a gateway to a new, fantasy world where magic and imagination create stories, which actually happens later. Did you have a similar feeling?

For me the magic started the moment the wine glass was given to me in my hand. In fact, I remember every time we took that shot, I was telling myself, ‘Ok Anindita, let the game begin.’ And then I would start strutting. I knew the moment I go through this passage to the other side of the bar, everything changes. It’s the beginning of a story.

By the end of the film, we actually realise your character was acting when she had met Ipsit (Ali Fazal)! She had planned it all. How did you want to play that scene? Your character had to play various dimensions, and her intent becomes clear on the second watch.

I knew I had to make Rhea Saran look extremely believable. People should be doubting Ipsit and his intentions and not even for a moment doubt that Rhea Saran is not who she says she is. I was given these instructions very clearly from the beginning. My audition was absolutely based on this and it was extremely crucial for me to get this tone right. Tess, who casted me for this film, conducted such a thorough audition, which really helped me nail this part. So from the very beginning I knew what I had to do.

Were there different variations of the scene? Was it done in one take?

No there wasn’t. This scene was carefully choreographed and designed by Srijitda, and yes it was done in one take.

Did you have workshops with Ali Fazal and Srijit before starting the shoot of Forget Me Not? What happened at those workshops?

Yes we did have to go through a workshop process. It was with Ali, Shweta (Basu Prasad) and Srijitda of course. We all read our scripts and started to set the tone of our characters. Started thinking of backstories. Where they come from? How was their childhood? Their personalities.... Since Shweta and I had just two moments that we get to share on screen, without dialogues, so it was important for us to convince the audience and make them believe that why these girls did what they did. Hence we did have to work a lot on our backstories.

How was your experience working with Ali Fazal?

It was great to work with Ali. I was quite intimidated at first, ’cause I am quite a fan of ‘Guddu bhaiya’, but he is so grounded, so warm and doesn’t shy away from showing his vulnerabilities. I think that is what makes him such a brilliant actor. He totally gives in, he is able to mould himself so easily. To watch him slip into Ipsit’s shoes with such ease was delightful. He is extremely chilled out, very approachable and a lovely human being.

For the brilliant meltdown scene by the pool, we heard it was improvised. How did the sequence take shape? What were the two of you aiming for?

Yes it was improvised. It was a long continuous shot and we knew we had to create a scene for the rest of the people to behave the way they did in the scene. Ali’s character Ipsit had already lost so much by then, so he had to bring out all his angst, pain, fear whereas all I did was just react. Ali made it so easy for me, he was so obnoxiously good in that scene that it got really easy for me to react the way I did. We didn’t rehearse that scene too much because we wanted that scene to look absolutely raw, and I think that really worked in our favour.

The underwater kissing sequence looks beautiful. How challenging was it to shoot the scene?

It wasn’t challenging at all, apart from the fact that water kept gushing into our nose. But I’ve realised one thing though, kissing underwater looks extremely romantic and beautiful but in reality it is not quite practical. Hahaha!

What kind of preparation did you take before going into the scene?

My only preparation for that scene was that I had to look my best and be in the best shape possible and I did work on it for a month. I immediately changed my diet.

Also, the shoot happened during Covid times... was that playing on your mind also?

Not really, ’cause a lot of precautions were being maintained. We had to regularly keep getting our RTPCR tests done, so I knew I was in a safe space.

How was the experience of shooting at the Ellora Caves?

I’d been to Ajanta before, when I was kid, but not to Ellora. To be able to be there, during Covid times, shooting this film, it just all seemed so surreal. I stared at the structures, the carvings for hours. I still don’t understand how something so beautiful was made so many years back with limited resources.

We see you and Ali laughing and talking a lot. What were the two of you actually talking there?!

We were literally talking about food. Hahaha... I don’t remember the exact details now, but I know for a fact it was to do with food!

Did you get time to sightsee?

Not at all, it was a tight schedule, but Shweta and I managed to visit Bibi Ka Maqbara for a couple of hours. It was a short sweet touristy visit. Shweta ended up clicking such beautiful pictures of me.

How was your experience working with Srijit?

I have worked with Srijitda before, although that was nine years back, on Hemlock Society. But I was quite excited to be able to work with him again. When I auditioned for it I had no idea what I was auditioning for, or who was the director etc. It was only once I got confirmed when the details were given to me and I immediately called him in sheer excitement.

Ray on Netflix has polarised the audience. What are your thoughts on this divide? Are you a Ray purist? Are you all for adaptations?

Any kind of art form will be perceived in different ways. An abstract art can get so many reactions. Some might not understand it at all, some might think it is alright and some might resonate so much with it that it makes them tear up. Same goes for film medium. It is not different than a painting. We knew it would get a lot of mixed reactions, we were ready for it. I am a huge fan of Ray of course, who isn’t? No one can replicate him and his legacy, hence I feel these adaptations were an apt way to pay homage to his centennial year.

What’s your message for the critics of Ray?

I would like to thank them for all the appreciation and for always being a mirror to the art form.

What’s the best compliment you have received so far on your performance in Forget Me Not?

I was told, ‘I absolutely believed every word that came out of Rhea Saran’s mouth’, to which I said, ‘I’d be scared if I were you’. Hahaha. For me this was the best compliment. Mini voice in my head told me, ‘Chalo you’ve done your job well then.’

Why did Forget Me Not resonate with you?

The story really resonated with me because I share a very close bond with my sisters, so I could feel Rhea’s shared pain and need for vengeance.