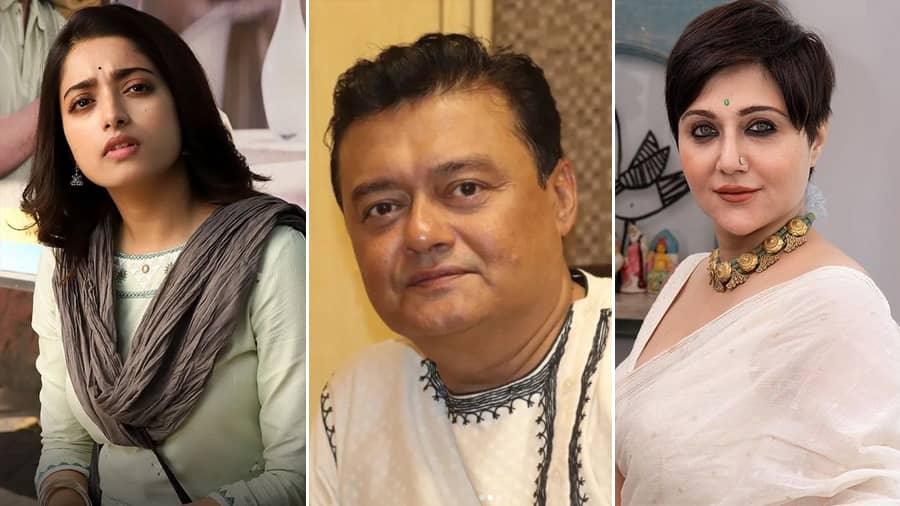 Prosenjit and Rituparna Sengupta’s new movie Prosenjit Weds Rituparna will arrive in cinemas on November 25. The actors will play a couple in this Samrat Sharma directorial venture.

Apart from her acting, it turns out that Ishaa Saha is also a fabulous singer. Here’s a glimpse of the actress enthralling the audiences with her singing prowess from the Kacher Manush music launch.

The musical duo Sourendro and Soumyojit have shared an adaptation of Bajlo Tomar Alor Benu, a song from Akashvani’s Mahishasur Mardini programme. They uploaded the song on YouTube with the caption “A prayer in Raag Bhairavi — welcoming Maa Durga — an icon of courage and strength”.

The trailer of Sandipta Sen and Ditipriya Roy-starrer web series Bodhon has recently come out. Directed by Aditi Roy, the web series will premiere on Hoichoi on September 30.

Actress Subhashree Ganguly makes her OTT debut with the screen adaptation of Kallol Lahiri-authored Indubala Bhaater Hotel. The Debaloy Bhattacharya-directed series will be shown on the Bengali streaming platform Hoichoi. Its release date is yet to be revealed.

Abir Chatterjee’s Mahalaya checklist looks so familiar to all of us. He checks the radio before going to bed, ensuring that it works fine before Akashbani’s Mahishasur Mardini programme begins at dawn.

Swastika Mukherjee has shared her “POV” with friends and biryani. She looks her diva-best in a white sari with a designer blouse from the brand Parama.

Saswata Chatterjee has shared a photo of his daughter Hiya with the caption “Everyday is Daughter’s day for me.”