A chat with Ritwik Bhowmik 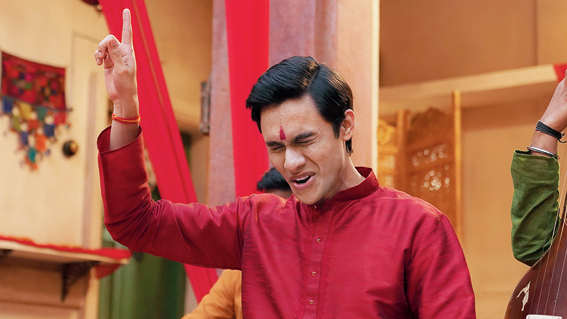 Bandish Bandits, the Amazon Prime Video series that stars stalwarts like Naseeruddin Shah and Atul Kulkarni, showcases Indian classical music and speaks of the journey of self-discovery of its protagonists, and has come in for a fair amount of praise. We chatted with the show’s leading man Ritwik Bhowmik, who plays Radhe, on the success of the show and its role in popularising classical music among the youth.

Bandish Bandits has been the surprise winner of the season. I understand that compliments are pouring in even close to a month after release. What are people telling you?

I think some of the most interesting compliments have come from the stalwarts in the music industry. A couple of days before he passed away, Pandit Jasrajji had sent us a video of how much he liked the show. I also only recently came to know that Mr Rajinikanth, the one and only Thalaiva, loved the show. Amjad Ali Khan saab also liked it. We made the show with the responsibility of showcasing Indian classical music, and the fact that people from the world of music are coming out and telling us that we have done a good job means the world to us. We were very careful with the way we treated music in the film, it’s a huge responsibility.

Other than that, Atul Sir (Kulkarni), who is also a part of the show, gave me a call after release and very sweetly told me, ‘While working together, it’s a tad difficult to gauge how the other actor is performing because you are so involved in your own performance. But now that I have seen the show, I can tell you that you have done a very good job’. That was a huge compliment, that also from an actor of his stature.
We did make Bandish Bandits with a lot of love, but we had no idea it would resonate like this. Everyone worked with a lot of heart on this show. We would have been happy even if any one department was singled out for praise, but the way it’s blown up has been beyond our expectations.

Is it true that you beat out 150 other contenders to land the part of Radhe?

Well, I have heard so! (Laughs) It’s quite a big responsibility when you hear something like this... that there were 150 boys who auditioned for the part and I got it. I wasn’t aware of this when I was working on the show and thank God for that because that would have definitely put some pressure on me. Now that I know this, I just hope that everyone else who vied for this role feels that I have done a good job.

What went into playing this boy whose life is driven by music?

This character has a certain skill set when it comes to singing. In life, I can’t sing to save my life! (Laughs) To become Radhe will probably take me 20-30 years, and perhaps even a lifetime will not be enough. We had a musical supervisor called Akshat Parikh who trained us for two-three months before the show started. I would spend two-three hours in riyaaz, followed by costume trials, scene work, workshops... the entire day for those months was only spent in prepping when it came to Shreya (Chaudhry, who plays Tamanna) and me. It was great fun and I learnt so much from it. I learnt how to play the tanpura and I did a lot of reading on people from the world of classical music and also watched a lot of videos of theirs. That’s how Radhe was formed, at least externally.

I was reading somewhere that you want to carry on this relationship with music by studying it...

Yes, absolutely! It’s been close to a year since we finished shooting for Bandish Bandits, and I am still training with Akshat. I am not doing it for Radhe any more, am doing it for myself. Somewhere down the line, I realised that music is like meditation... it really calms me down. I really hope, at some point in life, to take six months to a year off and just study music production... I am very interested in the process of how music is produced.

How do you think Bandish Bandits will spur the younger generation to discover and develop an interest in classical music?

I remember after I signed on, I was sitting with Anand Sir (Tiwari, the show’s director) one day and I asked him a very similar question... how did he think the youth of this country would react to the show and to Radhe’s world... Radhe is only 20-21 but his life is so different from how most urban kids live. For me, it was a surprise to see a character like this in today’s times. I initially refused to believe that someone like Radhe could exist, but once I reached Rajasthan for the shoot, I realised how far off I was, being the privileged Bombay kid that I am, from knowing how life works in some parts of the country. You know, we live in a bubble sometimes. Anand Sir told me that one of the goals of this show would be to reach out to the youth of India with this kind of music.

Classical music is not a dying art, it’s always around us. But we don’t put it into the bracket of popular music. Anand Sir wanted to make sure that on this show, we don’t treat classical music in the way that one has to go to a temple to listen to it. Classical music doesn’t have to be treated with so much reverence that kids get intimidated by it. Across the length and breadth of this show, classical music is treated as something cool... a lot like how jazz is treated. Classical music can be romantic, sexy, aggressive, anything... and if we are able to convey that to the youth, then we will catch on, is what Anand Sir said.
Fortunately and surprisingly, a lot of 18-19-year olds have taken to the show and its music... I get a lot of messages from them, and people put up stories on Instagram saying how much they are enjoying the classical bits of our album, more than the fusion sections. Classical music has made it to the mainstream and we can proudly say that our show has had a little bit of a contribution in doing that.

Rewinding a bit, did you always want to become an actor?

Yes, I always had one goal, as far as I can remember. A lot of my relatives have studied music and dance and the fine arts, but no one took it up as a profession. I was the only one who wanted to make my art into my profession, and my entire family has been so supportive. As a kid, my mom would accompany me to rehearsals for my plays and dance shows and make sure I get the right costumes. I get very nostalgic when I am asked this question, simply because not just me... my whole family wanted me to become an actor. That’s what gave me the courage to dream of this for so long... it’s now been 17-18 years since I did my first play. In my teens I started learning music... I played the guitar, the drums and after I passed out of high school, I started taking dance lessons with Shiamak Davar and within a year, I became an instructor there. Once I finished doing all of that, I started focusing on becoming an actor, and here I am.