The Ayan Mukherji film, featuring Amitabh Bachchan, Nagarjuna Akkineni and Mouni Roy, will release at the theatres in Hindi, Tamil, Telugu, Malayalam and Kannada on September 9 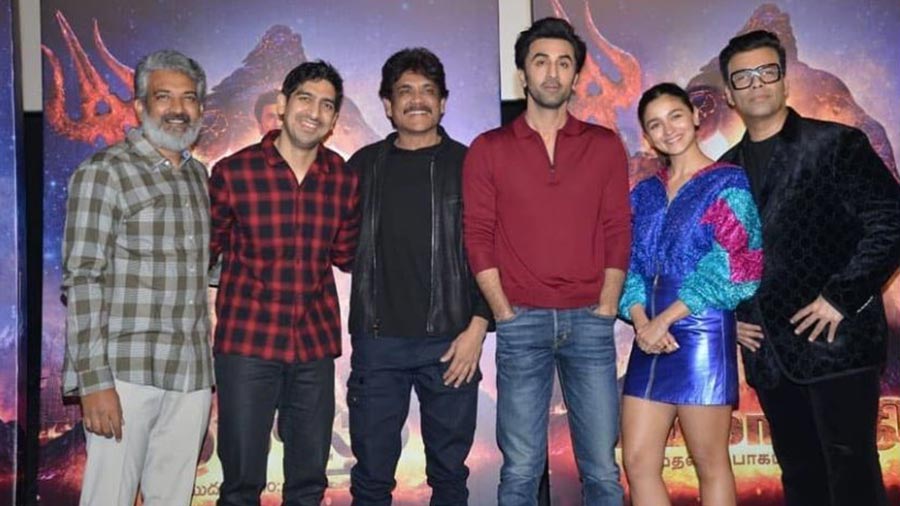 Ayan Mukerji’s Brahmastra has taken so long in the making that the long-standing joke that its lead pair Ranbir Kapoor and Alia Bhatt might get married and become parents before the film can get a release is almost coming true.

Punctuated by multiple delays and constantly-changing release dates, Brahmastra, which marks Ranbir and Alia’s first film together, can easily be the subject of another film made about its topsy-turvy journey.

While we are counting down to September 9 for the film’s release, we list 11 factors that have made Brahmastra one of the most-talked-about Bollywood movies in recent times.

Ranbir and Alia were spotted together for the first time during the promotions of Imtiaz Ali’s Highway in 2014. Fans have since wanted to see them together in a film, which finally happened when Ayan Mukerji cast Ranbir and Alia in Brahmastra.

But a lot has happened from the time of casting to the countdown to the film’s release. Ranbir and Alia got into a relationship, moved in together, got married and are expecting their first baby.

Surely Brahmastra will be remembered for having the maximum number of release dates for a Bollywood movie! Before the shoot, the film’s working title was Dragon.

Brahmastra was first announced in 2014, after the successful run of Ayan Mukerji’s Yeh Jawaani Hai Deewani in 2013. The release was initially planned for Christmas Day 2016 and then pushed to 2018. Owing to Ranbir’s schedule for Rajkumar Hirani’s Sanju, the film was further pushed to mid-2019, then to the end of 2019 and later to 2020.

Brahmastra’s logo was launched in March 2019 at the end of Kumbh Mela, which also marked the Shivratri celebrations. Then the pandemic hit and the release date was put on hold. The movie was pushed back even further to 2022 due to the second wave. Brahmastra is finally set to hit the theatres on September 9.

A fantasy plot: Arrival of the Astraverse

Brahmastra is about the lord of Astras – Brahmastra. Brahmastra: Part One - Shiva, the first of the trilogy, marks the beginning of a new cinematic universe, Astraverse, set in a modern world, inspired by concepts and tales from Indian history with elements of fantasy, adventure and drama.

In the trailer, Amitabh Bachchan’s voiceover narration tells us about the Astras – water, wind, fire – and the lord of the Astras, Brahmastra. A boy in the modern world must discover that the destiny of Brahmastra depends on him. Shiva (Ranbir Kapoor) has the power of fire, one of the astras. There are evil and dark forces led by Junoon (Mouni Roy), who he would have to take on with the help of Guru (Amitabh Bachchan) and artist Anish (Nagarjuna Akkineni) to save Brahmastra.

Rajamouli and support from the south

Director SS Rajamouli, the man behind RRR and the Bahubali films, is one of the presenters of Brahmastra — his involvement with the project is going to endear the film to cinema-loving audiences in south India.

Then comes Chiranjeevi, who lent his voice to the film and the trailer in Telugu.

Jr NTR also came on board to be a part of Brahmastra’s promotional event in Hyderabad to help take the film to Telugu viewers.

Ranbir and Alia, who play Shiva and Isha in Brahmastra, will be seen with Amitabh Bachchan (who plays Guru) for the first time. Ayan had earlier posted on social media about Bachchan loving the Brahmastra concept. Another highlight is Nagarjuna’s return to Bollywood after 16 years; he plays artist Anish in the film. Ayan describes Nagarjuna as “a gentleman with the warmest of hearts” and the Telugu star’s inclusion has made it a pan-India film. TV’s popular face Mouni Roy plays the antagonist Junoon. As per Ayan, her character is a surprise package.

Producer Karan Johar recently unveiled a teaser on Twitter with the caption, “The extraordinary power of Vānarāstra will unfold in just 8 days!” Fans and industry insiders went berserk as Vānarāstra appears to have a close resemblance with Shah Rukh Khan. His reverse kick on the ball of fire reminds us of his football kick in the Yeh ladka hai deewana song from Kuch Kuch Hota Hai.

Speculations are rife that SRK has a cameo in Brahmastra. Fans are waiting to see the superstar in another cameo this year after R. Madhavan’s Rocketry: The Nambi Effect and Laal Singh Chaddha.

There is another teaser, shared by Karan Johar, in the run-up to the release. A section of fans believe the person shown in the teaser is none other than SRK, while others feel it’s Ranveer Singh showing off his abs.

Days before Ranbir-Alia’s wedding, the Kesariya song teaser video came out, and people lapped up the hummable track composed by Pritam. But when the full song was out, Twitterati reacted strongly to its mix of Hindi and English in the lyrics — specially the phrase ‘Love storiyaan’ — written by Amitabh Bhattacharya, and a lot of memes did the rounds.

However, the second song to drop, Deva deva, turned out to be soulful. The third song, Dance ka bhoot, is a dance number, giving a déjà vu of Balam pichkari, but Ranbir doing those choreographed finger moves around his chest needs to be rewatched.

Ayan Mukerji’s first two films with Ranbir Kapoor — Wake Up Sid and Yeh Jawaani Hai Deewani – were not only successful at the box office, they also established Ranbir as a bankable star with acting chops. Can they deliver a hat-trick? We are keeping our fingers crossed.

To cater to the audience exposed to Hollywood movies and animated content on OTT platforms, Brahmastra rides on 3000 VFX shots. All the VFX work was done in London. After the movie was shot, it was converted to the 3D format.

Bankrolled by Dharma Productions and Fox Star Studios, Brahmastra is touted as one of the most expensive films made in Bollywood. Its estimated budget is over Rs 400 crore.

Meme lords worked extra hours to create some gems. We selected a few from the official Brahmastra page on Instagram where the makers shared them as a token of appreciation to fans’ creativity.