The event brought together creators, artistes and enthusiasts to celebrate and develop on the connection that the Gen Z share with the audio realm 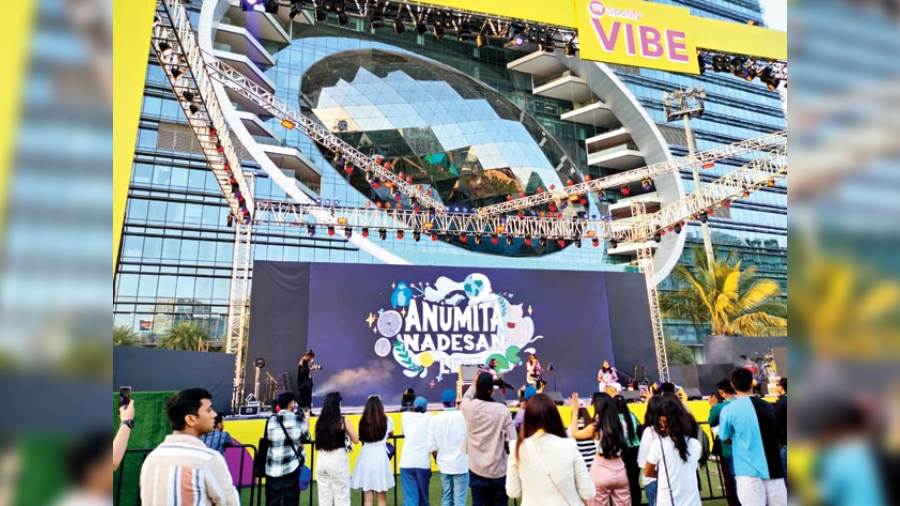 Spotify IRL, held at the Jio World Garden in Mumbai on November 5, brought together creators, artistes and enthusiasts to bond over music, drinks, munchies and refreshing conversations, to celebrate and develop on the connection that the Gen Z share with the audio realm. Peppered over the day were a chain of performances, relevant and fun panel discussions and activities in the respective Spotify pods : Heal, Learn and Game.

The Heal Pod housed numerous sessions and sharing circles with speakers and creators like Rytasha Rathore, Tarini Shah, Renil Abhraham facilitating conversations on issues encompassing social media hatred, accepting yourself and adoring imperfections that define us. With an ambient serenity, the pod was quite comfortably the definition of a safe space that rejuvenated the soul. The Learn Pod had a chain of quizzes on pop culture, music and sex conducted by Aakash Mehta, Raghav Meattle and Leeza Mangaldas which drew immense crowds and the energy inside the pod was through the roof consistently throughout the evening — the highlight was certainly the final quiz of the evening conducted by the ever-charming Leeza Mangaldas which was a fun and enlightening segment on sex education. The Game Pod housed the crowd-magnet VR games, foosball, darts and everything that appealed to the gamers in town.

Weaved with the chain of activities inside the pods, were panel discussions on music and language, the importance of playlists and balancing the grind and drill of work with speakers like Shalmali Kholgade, Jonita Gandhi, Anuv Jain, Pooja Dhingra and others opining on these issues laced with personal experiences. The first panel OoAntaWow had Jonita, Shalmali and Nimrat Khaira debating over the subject of whether language in music matters anymore. Jonita said: “I think when they are listening to something, people need something to relate to, to vibe out. When we say music is universal and has no language, it’s the production and the music that is brought together to appeal to everyone, so that they can sing along or even dance to it, bringing something that initiates a connection. They are able to appreciate languages they haven't even heard before, and I think that is incredibly important. When I'm recording something in a language that I don’t speak in, I sit with the lyricist and the composure, I try to know what each word means, bringing in an element of the same to the mood of the song. It is also very important to ensure that the native speakers of the language don't get distracted from connecting with the song if I'm not getting the words right." Shalmali who has sung and delivered hits in different languages added, " I think the way the instruments are installed into the scope of the song is independent of the language. The way the words fit into the rhythm of the song makes or breaks the song for me. We are somehow conditioned to relate to the musicality, but certainly once the interest is sparked, we delve into the lyrical part of it as well. There’s a beautiful connection. Whenever I’m performing live, I try to go on to the stage absolutely rehearsed and I don’t take in a lot of requests, but two lines from a requested song always makes sense. They don’t try to correct or fixate over the words I couldn’t pronounce properly, as they are so happy that I try.”

The next panel discussion was one on the efficacy of playlists, what the Gen Z needs and the connection that they have and the one that is initiated with the ecosystem that is provided and playlists that are being curated or shared— titled ‘Soundtrack Your Life: The Playlist Phenomenon’. On the panel was Akshay Kapoor, editor of The Indian Music Diaries, singer Hanita Bhambri, Neha Ahuja, director, head of marketing, Spotify, and one of India's biggest indie pop sensations Anuv Jain. When asked about how his growth can be charted with the songs that he recorded Anuv said, “It all started with requests to share my songs, but it sparked organically. I find myself on the cutest of playlists that are being shared between friends and romantic partners and I think, that’s the growth — a sweet mix of both. It’s a very intimate thing, and with the ecosystem that Spotify provides, it really helps a lot of artistes to find their way into the collective scene.”

The final panel of the day was on the importance of striking a balance between personal and professional called ‘The Grind vs The Peace of Mind’. On the panel were creator and singer Avanti Nagral, Suchita Salwan, CEO, Little Black Book and India’s leading pastry chef, Pooja Dhingra. Talking of striking a balance Pooja said: “I think I had to learn how to find the balance. When you are an entrepreneur, every problem is your problem, when you are juggling many hats at the same time. I started with all of it when I was 23, and there was a time, with everything going around, I felt like a burnout. I realised I had to take a step back and find myself among all of these things and all of my roles, and define balance. It’s still a work in progress but for me balance essentially means when I’m doing something, I’ll not be thinking about 10 other things, and give them their own spaces, channeling it accordingly.” Adding to the importance of the need to channel and space things out, Avanti said: “Often in the business of producing content, we have to draw a line between the person that we are and the persona that we put out there. I chose very consciously to maintain the same — indoors and out there. But it often becomes tricky where the lines blur and expectations come into question.”

To add to these was the Spotify Vibe arena which held the centre stage hosting musical acts like Anumita Nadesan serenading with her soft numbers and indie ambient pop-rock band Easy Wanderlings, composer-singer Kanishk Sheth and DJ duo The Lost Stories cooking the groove to close the night on a beautiful note.