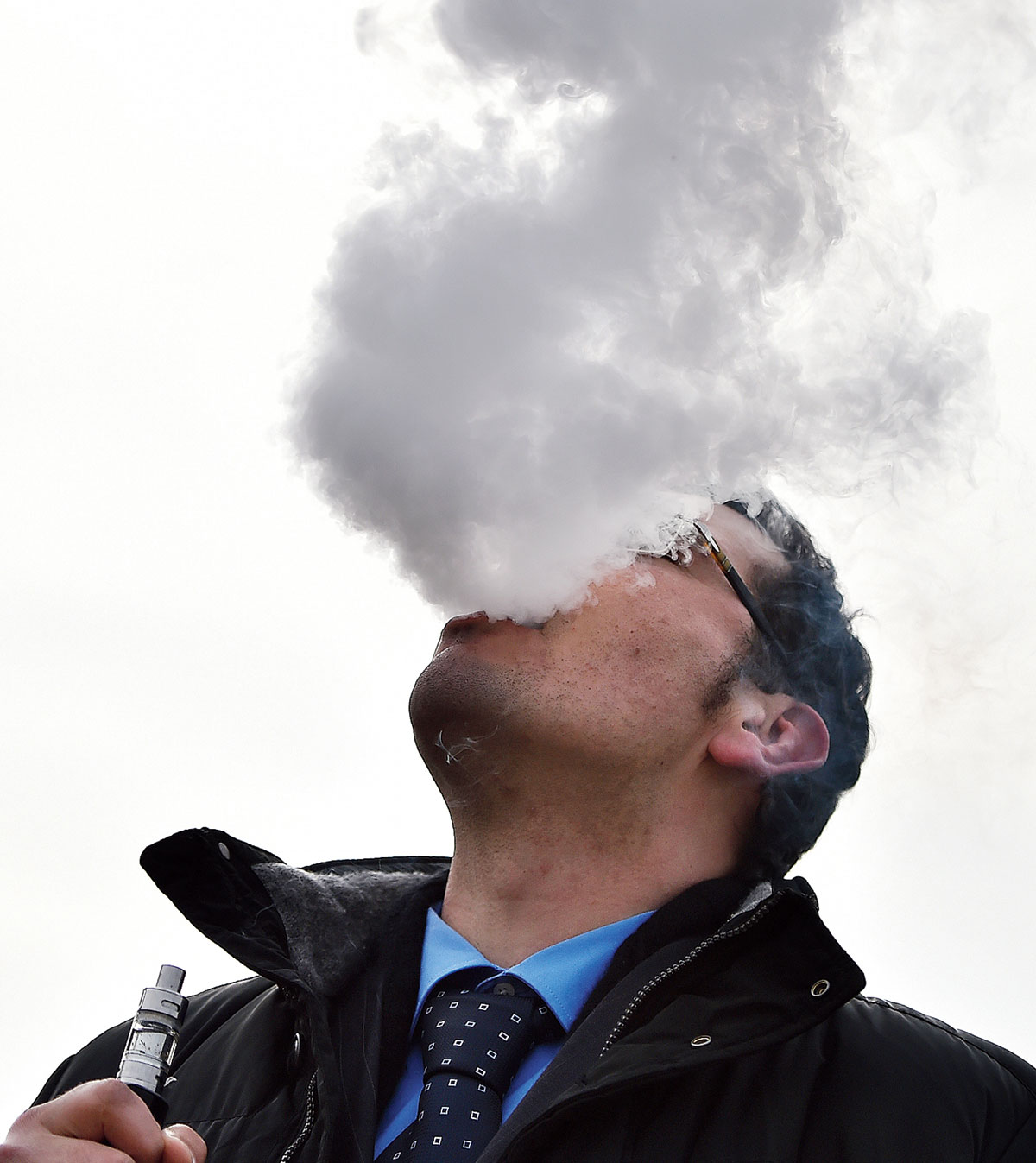 Maneesh Kasera was a smoker for 28 years. Two years ago, he made the first attempt to quit smoking. He tried nicotine gums — a kind of chewing gum that delivers nicotine to the body — for a day or two but nothing could wean him away from cigarettes. Finally, he tried e-cigarettes.

Nicotine is the stimulant drug in regular cigarettes, cigars and other tobacco products. E-cigarettes, which are also called e-cigs, vapes, e-hookahs, vape pens, and electronic nicotine delivery systems (ENDS), run on vape juice or e-liquids, which are a mix of vegetable glycerin, propylene glycol, flavour compounds and nicotine. Says Kasera, “Here, you just make clouds of vapour; there is no smoke. When I tried these e-cigarettes, I didn’t feel the burn as I used to while smoking cigarettes. I got hooked to them.”

Like Kasera, many Indians are vaping — the term for using e-cigarettes. But the recent advisory from the Indian government to ban e-cigarettes has thrown vapers or e-cigarette smokers into a tizzy.

The international lobby of vapers is also worried. And why not? After all, India is the third largest tobacco producer and the second largest consumer of tobacco worldwide. With 12 crore smokers in India, the vaping industry does have a promising future here. While the global e-cigarette industry is worth $10 billion, according to data and analytics company, Global Data, India’s e-cigarette market is poised to grow at a compound annual growth rate of 34 per cent from Rs 4.1 billion in 2017 to Rs 7.4 billion in 2019.

Recently, a group of doctors and lawyers from the West came to India to understand the growth possibilities of the vaping industry, the new advisory notwithstanding. They also sought meetings with medical practitioners, public health policy advocates, e-cigarette dealers and media to popularise the idea that e-cigarette is a safer alternative as this is only a method of “harm reduction” for nicotine addicts.

Vapers say that post the big switch, a lot of health issues usually brought on by smoking — such as the morning cough, breathing problems, sleep disorders and loss of appetite — disappear.

They blame the anti e-cigarette advisory on the strong tobacco lobby, calling it the handiwork of prominent politicians from Andhra Pradesh — one of the top tobacco-producing states — who represent tobacco farmers. This lobby, it seems, has stalled many reforms and policies at a nascent stage.

In 2014, a government committee had recommended plain packaging of cigarettes, which aims to remove association of brands and in the process, discourages brand advertising; it invited feedback from people on it but nothing happened. And now the government is up in arms against e-cigarettes. It alleges that schoolchildren are getting hooked to e-cigarettes to look “cool”, but thereafter it becomes an addiction. In the United States, vaping has graduated from being a trend to a social phenomenon among school and college students, the government argues.

Delhi-based Abhimanyoo Khatri says, “It isn’t an addiction. I’ve restricted myself to no nicotine liquids. I can comfortably live without vaping for 10 days, this after vaping for three years.”

Arora clarifies that he is no advocate of tobacco smoking but is comparing the two products in order to give an idea of the extent of harm each can cause.

The vaping lobby argues that in cigarettes, it is combustion and not the nicotine that causes harm. Canada-based public health policy lawyer David Sweanor, who has been working for 35 years in anti-smoking campaigns, says, “Over 20,000 people die every day worldwide from smoking cigarettes. We know what’s causing the disease in the case of cigarettes but it’s not present in vaping. The nicotine is not the problem, the drug delivery system is. And now we have technology wherein nicotine can be delivered without smoke. In a country like India, where there are so many tobacco users, there is an enormous potential for risk reduction by substituting cigarettes with less hazardous products,” he says.

The Royal College of Physicians in the UK, in its 2016 report titled “Nicotine without smoke: tobacco harm reduction”, concludes: “Experience to date suggests that, as predicted in principle in the 2007 report, the availability of e-cigarettes has been beneficial to UK public health.”

But the Centers for Disease Control and Prevention in the US has a counter-argument. It says e-cigarettes produce aerosol by heating a liquid that contains nicotine along with flavourings and other chemicals. It argues that acute nicotine exposure can be toxic to non-smokers. Nicotine from the aerosol or the liquid can remain on all surfaces for weeks and months, and may react with ambient nitrous acid to produce potent carcinogens — leading to inhalation or ingestion of and dermal exposure to carcinogens.

Vapers in India have been talking about the need for consumer awareness about e-liquids. There are over 100 small and medium e-liquid dealers in India who sell high-end imported devices and consumables from China, Malaysia, the US. Vape juice varieties such as Naked, Vape Dinner Lady and Nasty are available online for Rs 400 to Rs 1,500 for a 60/100ml bottle depending on flavour and brand. Certain desi vape juices are available at Rs 40 for 10ml.

A vape juice dealer, who did not want to be identified, tells The Telegraph that Indian suppliers are not equipped to meet the growing domestic demand. “When I started the business two years ago, we used to get an order or two. Now it has increased to at least six a day. The annual turnover is close to Rs 90 lakh.”

Spotting the growing demand, domestic tobacco players such as ITC Ltd and GPI Ltd have also jumped into the fray.

Bangalore-based Imran Saleem, who produces the e-liquid in his lab in Hyderabad, has an annual turnover of over Rs 1.3 crore. Some of the popular flavours are tobacco, strawberry, mango, mint and cheesecake.

Calcutta-based Kasera, who is also an e-cigarette dealer, complains that one cannot advertise these products openly because there is a fear of being harassed by government agencies. The Delhi government withheld permission to the Vape Expo India 2017.

According to the Global Adult Tobacco Survey 2017, since 2010, there has been a comparative reduction of 33 per cent in tobacco consumption among 15 to 24-year-olds and a 54 per cent reduction among 15 to 17-year olds. Doctors, however, are far from convinced.

Says Arora, “Even after such a long-driven anti-tobacco control programme in India, we couldn’t achieve the desired results because of tobacco industry interference backed by influential people at various levels. We don’t want a market for e-cigarettes now.”

There are others who believe the anti-tobacco lobbyists, including NGOs and state agencies, who receive funds from places such as the US-based Bloomberg Philanthropies, are only creating a myth around e-cigarettes for vested interests.

Vapers, in the meantime, want regulated sales of ENDS to ensure that quality products are sold in India. Says Kasera, “No quality control is bad as the market for genuine e-liquid sellers is being affected. Low-quality products are now available even in a paan shop.” He adds, “It is important to regulate in terms of quality, nicotine content, expiry dates, etc. Complete ban is not the solution.”

Are you a millennial moving city? Co-living could be for you