Politics, crime and passion in 1700 BCE and its gory consequences in 2017. That’s what Vineet Bajpai’s Harappa (VB, Rs 200) and its sequel Pralay (VB, Rs 250) are about. Add to that the mystical setting of Harappa and Benaras, face-offs between good and evil, murders, exorcism, assassins and hidden foes;  and we have a racy plot that even holds promise of an action-packed movie in future. Bajpai has not only brewed new life into some ancient civilisations but given a new twist to terms like “Aryans” and “Indus Valley Civilisation”. 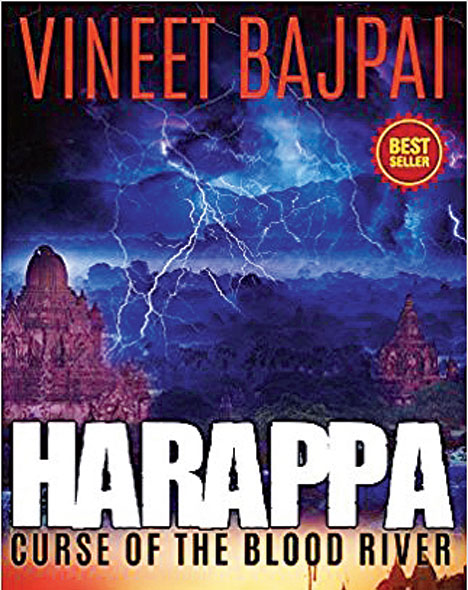 Politics, crime and passion in 1700 BCE and its gory consequences in 2017. That’s what Vineet Bajpai’s Harappa (VB, Rs 200) and its sequel Pralay (VB, Rs 250) are about. Add to that the mystical setting of Harappa and Benaras, face-offs between good and evil, murders, exorcism, assassins and hidden foes;  and we have a racy plot that even holds promise of an action-packed movie in future. Bajpai has not only brewed new life into some ancient civilisations but given a new twist to terms like “Aryans” and “Indus Valley Civilisation”.

Harappa makes for a fast and interesting read, especially for those who love thrillers, seasoned with a dash of history or mythology. Its last chapter whets your appetite for Pralay and you are tempted to finish it almost in the same breath. Pralay’s end looks forward to Part III — Kashi: Secret of the Black Temple.

The protagonist of the books, Vidyut Shastri, is a talented Delhi-based entrepreneur who runs his own corporate security company, protecting clients from technology-based espionage. He has a deep spiritual side to him that only his girlfriend and friends know. As the plot unfolds, we see him taking on the role of a modern-day messiah.

Shastri is a reincarnation of his powerful predecessor, Vivasvan Pujari, the wronged head priest of Harappa. Both are half-human and half-god and are here on earth to avenge religious and political wrongdoings.

Harappa and Pralay have no boring moments. Both take you on a rollercoaster ride across eras with ancient philosophies blending beautifully with modern technology. You will be bound to question the real purpose of religious orders in the end.

What makes relationships work? What doesn’t? What makes two people in love remain true to each other throughout their lives? Why do they go their separate ways? Nikita Singh’s Letters to My Ex (HarperCollins India, Rs 199) — which tells the story of two young lovers, Nidhi and Abhay — explores relationships in the context of these questions and tries to come up with some answers as well.

Nikita and Abhay fall in love while still in college and have a steady relationship of five years. But Nidhi shocks herself, and everyone else, when she runs away during her engagement ceremony and breaks up with Abhay.

Told through letters, their love story takes us through various stages of their romance, breakup and heartache. The intensely personal narrative flashes back and forth in time as the letter writers, Nidhi and, later, Abhay, reminisce their moments of togetherness, put them in perspective and try to make sense of their present in the light of the past. What makes the format of the novel unique is its blend of traditional letters, emails and Internet chat, the last adding a dimension of live conversation.

Nidhi’s letters are, in her own words, “writing therapy”. She types letters to Abhay on her laptop, which she never intends to send him. Though she writes to be able to rationalise her decision to end her relationship with him, she ends up pining for Abhay.

Often lengthy and rambling, her letters reflect her obsessive nature and confused state of mind, her spontaneous yet repetitive outpouring of emotion revealing contradictions within her own self. Abhay, on the other hand, appears more sensible and grounded. Though heartbroken, he attempts to let go of the hurt and pick up the fragments of his life.

Jack Canfield’s The Key to Living the Law of Attraction, first published in 2007, is back in a new avatar (Hachette India, Rs 299). Co-authored by D.D. Watkins, the book is a follow-up to Rhonda Byrne’s The Secret that made the Law of Attraction the go-to mantra for the self-help industry. It’s essentially a how-to on having a more positive frame of mind.

The 168-pager gets straight down to business charting how to focus on the good to attract the good. It’s neatly divided into chapters devoted to you, your dreams, your mind and how to eliminate unwanted negativities.

There are workbook sections peppered throughout that ask you to list down things important to you, like what you count as your strength and occasions that made you feel joyful or even how you want your finances to be. This must sound like a job interview, except Canfield — the co-creator of the Chicken Soup for the Soul series — uses this empirical evidence to educate and guide the reader into using the Law of Attraction to their benefit.

We like that Canfield is not preachy and wants readers to draw lessons from their life experiences. For those who are sceptical of self-help books, this one could be a good start.