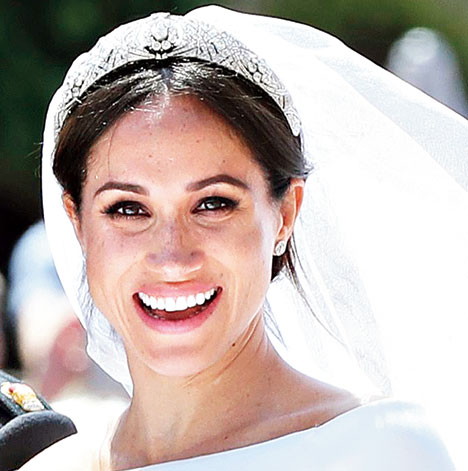 One, of future royalty, who, in a simple boat-necked white gown, with the only visible accessories being a diamond tiara, a breathtaking radiance and a beaming smile, was a picture of understated, empowered elegance. And the other, filmi royalty, who, heavily-bedecked with a multi-stringed mathapatti, choker, raanihaar/guttapasula, haathphool and mogra, painted a resplendent, endearing visage of empowered, energetic exuberance.

Welcome to world of the “be your own kind of beautiful” bride of 2018 — Meghan Markle and Sonam Kapoor Ahuja. Both fashionistas, both trendsetters who have, through their style, make-up and hair choices, set benchmarks for those who refuse to be fashion victims that buckle under the pressure of what the world wants them to be and look like.

A middle-parting, low bun, backcombed crown with those coming-undone wisps of hair. Wisps can lend a soft, youthful, feminine, flattering touch to most shapes of faces but, in this case, came in for criticism as many felt their fluttering distracted viewers during what was supposed to be a serious occasion. Were those errant wisps choice, or a hairdresser’s craft coming unintentionally undone?  Lets opt for the former, as those teasing tendrils made their appearance much later for her reception updo too. Here are some variations on the wisps.

Take a horse-shoe section. Tie the lower section into a low ponytail. Middle-part the hair in the horse-shoe section and backcomb the crown section only, lift to form a slightly raised puff, brush down neatly and pin it. Bring the hair that’s left on either side and pin to the backcombed area. Pull out a few wisps on either side or one side only. Spray lightly. Divide the low ponytail in two, twist each section till it curls on itself, then pin to the scalp individually wrapping one around the other.

Backcomb the entire head of hair in front, section by section carefully. Brush down loosely, but neatly. Draw the hair from the back of the right side towards the centre then pin along its length to secure it. Bring the hair from the top and tuck it into this pinned line of clips. Now bring the entire hair that’s left on the left side, twist it around your fingers, and gently tuck in all the hair. Pull out wisps from the front section.

Take a horse-shoe section. Tie the lower section into a low ponytail. Side-part the hair in the horse-shoe section and backcomb the crown section of it only. Lift to from a slightly raised puff, brush down neatly and pin it. Bring the hair that’s left on either side and pin to the backcombed area. Pull out a few wisps on either side or one side only. Spray lightly. Take the ponytail and divide it into three, backcomb each section, then braid. Tie a band around the braid. Spread and pin each interlace of the braid to the scalp.

Dewy, luminous and natural. Meghan has said that her go-to is “curled lashes, mascara, chapstick, a bit of blush, moisturisers and luminosity-enhancing primers”. She isn’t fond of foundation, which is why her freckles, even on her wedding day, peeped through.

1 Concealer under the eyes.

2 Subtle smokey eyes in a grey or taupe palette, plenty of mascara and well-defined, although not heavily drawn, eyebrows with only a hint of eyeliner.

3 Her tanned complexion was perfectly complemented by a peach-toned blusher.

4 Lips were left colour-stained in a flesh-toned hue,
the finish more satin than glossy.

The wedding saw her hair centre-parted and pulled back in a simple bun over which mogras were arranged. It was her sangeet hairstyle, however, that gave us #GajraGoals, and the coming wedding season might see brides experimenting with fresh floral embellishments.

There are several ways to wear flowers or gajras in your hair, and with dupattas and veils mostly made of net these days, fresh flower hair adornments will get their share of limelight.

Plait the hair and while doing so, interlace a three-strand parande to the hair, which will stabilise the plait and make it easier for the gajras to be tucked into. It also gives volume to hair that is thin. Take two long-stringed gajras, wind one along the length of the plait. Take another long-stringed gajra and wind it along the length, beginning on the opposite side so as to form an interlocking of both lengths of gajras.

Make a textured bun, high or low depending on what your ensemble is, with either plaits or tonged curls. Pin the gajra around only the lower part of the bun.

Middle-part the hair and twist hair on each side to make it into a low ponytail. Tong the ponytail, braid it or twist it, making a low bun, then drape the gajra around the circumference.

Here the hair is loosely plaited, and wisps or tendrils are allowed to roam freely, framing the face, and the gajra is then pinned strategically to fall over one shoulder.

In this style, all the hair is sleeked back into a high ponytail. The hair is then wrapped around to form a topknot. Gajras are draped over the entire bun.

In this style, the hair is tied into a low bun behind which, a three-strand opened plait is rebraided. The entire bun is then covered in gajras and the plait accessorised with mini metal shield embellishments.

At her wedding, Sonam’s look was vibrant but aesthetic, so as not to take attention away from the stunning maangtika she wore.

1 Her lips were red-stained in keeping with her intricately designed, opulent red lehnga.

2 Her doe eyes didn’t have the customary winged liner, but was lined on the inner lower lids and upper lids. Individual lashes gave her eyes depth and dimension.

3 Her cheeks were highlighted and dusted with a peachy-toned blusher.

4 Her brows were defined and neatly arched.

Priscilla Corner is a senior hairstylist with the UK Hair Council and co-owner of the June Tomkyns chain of salons. She is the national brand ambassador for Schwarzkopf ESSENSITY. She can be reached at @junetomkynshair on Twitter and @priscilla_corner on Instagram