Dating back to the 2nd century BC, more than 20 bronze statues discovered during excavations in a thermal resort in Tuscany is one of the finds of the century 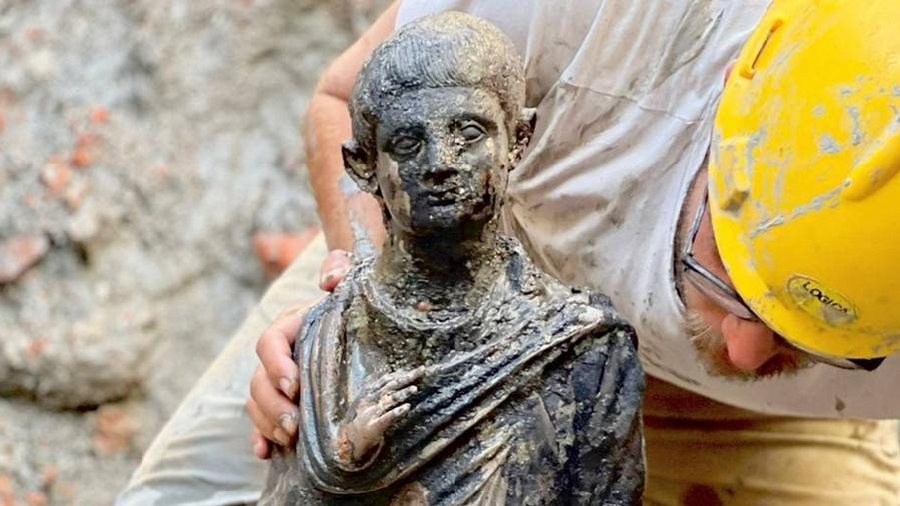 The bronzes include replicas of Roman gods and goddesses including as Apollo and Hygieia, and sundry emperors.
Deutsche Welle
Deutsche Welle   |   Published 12.11.22, 10:54 AM

An archaeological dig in the Italian thermal town of San Casciano dei Bagni in Tuscany has unveiled 24 well-preserved bronze statues from ancient times that are said to be up to 2,300 years old.

Dating back to the Etruscan period, an Italian archaeological team dug the figures out of the mud that also preserved the statues for two millennia.

The find has been compared the discovery to the famous bronze Riace Warriors statues discovered in Calabria in 1972. The pair of two-meter tall Greek warrior bronzes were cast around 450 BC and remain very rare life-size bronze statues from Greek antiquity.

'The discovery will rewrite history'

The archaeologist in charge of the excavations, Jacopo Tabolli, said on Tuesday that

"the discovery will rewrite history" and is "without parallel."

"The Tuscan site houses the largest quantity of bronze statues from the Etruscan and Roman periods ever discovered in ancient Italy and is one of the most important in the entire Mediterranean region," Tabolli added.

"This is unprecedented, especially because until now mainly terracotta statues from this period have been known," he said.

He hopes the discovery will shed greater historical light on the period in which the bronzes were cast.

The bronzes include replicas of Roman gods and goddesses including as Apollo and Hygieia, and sundry emperors.

These deities were venerated at a sanctuary in San Casciano dei Bagni, which was established by the Etruscans and then expanded under the Romans, according to Italy's culture ministry. Visitors have been drawn to the natural thermal waters of the spa town for more than two millennia.

The culture minister Gennaro Sangiuliano spoke of the extensive "treasure" unearthed at the site. During three years of excavations by archaeologists, around 5,000 gold, silver and bronze coins were also discovered.

Preserved in mud for two millennia

The statues in the site in the Tuscany region were protected for two millennia by the mud and hot water of the thermal baths. Some are almost one meter high.

The warm water has preserved the excavated pieces so well that the Etruscan and Latin inscriptions are still visible, including the names of powerful Etruscan families.

"This is certainly one of the most significant bronze finds ever made in the history of the ancient Mediterranean," said Massimo Osanna, Italy's Director General of Museums.

The bronzes will ultimately be the star exhibits of a planned new museum that will be accompanied by an archaeological park.