Advertisement
Home / Culture / People / The matriarch who grew a moustache 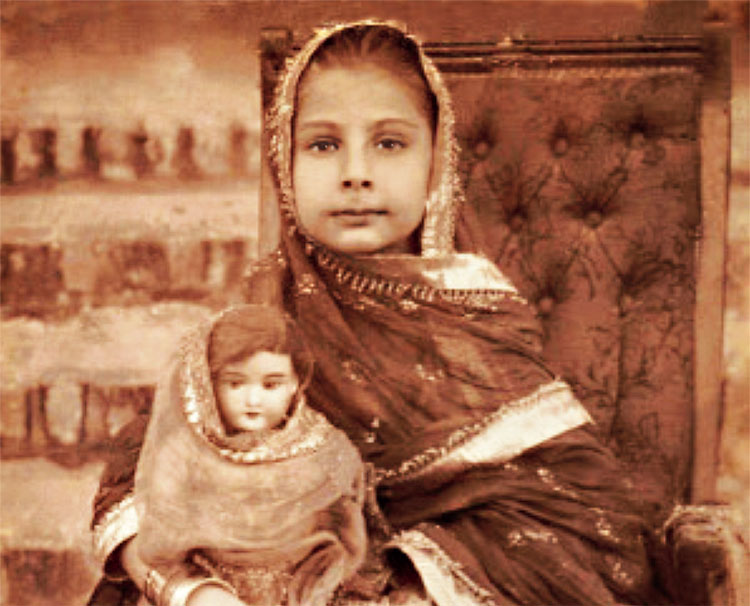 Before India’s Independence, Rampur used to be a princely state in Rohilkhand in western Uttar Pradesh. And the Rohila Pathan sardars were the rulers of Rampur. Qamar Zamani was the wife of Akbar Ali Khan, home minister of the Nawab of Rampur.

Though 19th century Rampur was a feudal and patriarchal setup, Akbar Ali’s household was different. Women not only had a say in most matters, they also had their way. In time, when Akbar Ali was executed by the Nawab, the reins of the family were taken over by his widow.

The exhibition, Gold Dust of Begum Sultans, narrates the life-stories of Qamar and the other matriarchs of Rampur. Curator Ranesh Ray is loath to call it a travelling exhibition, but fact is the exhibits did travel all the way from Delhi to Calcutta, where they were displayed at the Kolkata Centre for Creativity.

Apart from photographs, clothes and family jewellery, the exhibition hall is fitted with large screens showing films and speakers playing audio clips on a loop. “I have tried to give viewers a haptic experience, wherein you can feel as well as see things,” says Ray.

The exhibition is based on the book, Sunehri Rait, which is Urdu for gold dust, and is the story of Akbar Ali’s family as chronicled by his descendant, Zubaida Sultan, in 1989 and translated into English in 2016 by two other descendants, Zakia Zaheer and Syeda Saiyidain Hameed. Says Syeda, “The manuscript of the book was lying in our family for a long time. It was in fragments; we have fleshed it out. We have also altered the names of the characters.”

Asad Ali was known for his sexual profligacy; he would often marry a woman for one night only. And not just that, writes Zubaida, “Once the bridal night was over, they were buried alive within the four walls of the palace.” But one such wife got away and even gave birth to a son. The Nawab acknowledged his son, but at some point when the boy went against him, he ordered his men to execute him and it was Akbar Ali who was supposed to ensure it.

But Akbar Ali could not get himself to obey the Nawab in this case. He fled the state to escape Asad Ali’s wrath, but was eventually found and summoned, and thereafter he died in Rampur under mysterious circumstances. Says Syeda, “It is said that Akbar Ali Khan was poisoned to death.” The exhibition too is structured around this story. 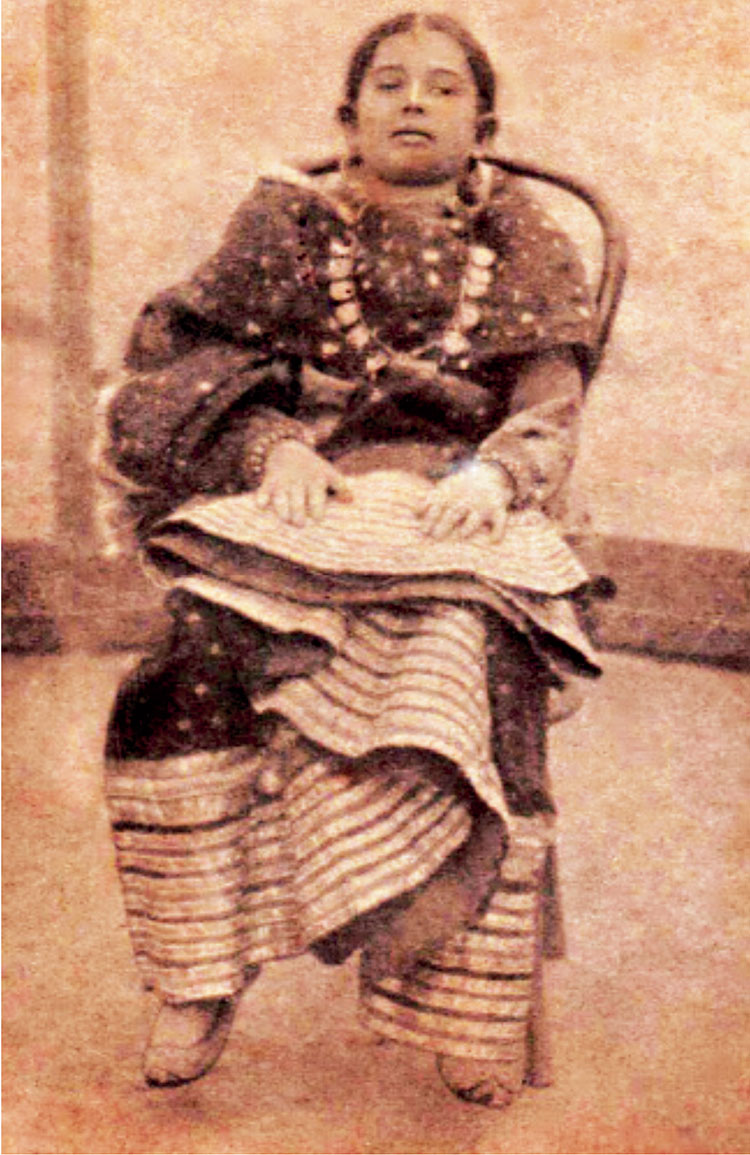 Qamar as a bride at nine
Source: From the family collection

One of the exhibits that arrests attention is a photograph of Qamar Zamani as a little girl. It shows a little girl in a chair, swaddled in several yards of cloth, a weighty looking necklace around her neck, bangles on either hand and loopy earrings. Her head is tilted back, her little hands are stiff and downturned on her lap and her feet barely touch the ground. According to the legend below the photograph, she was married when she was nine and by the time she was 12 , she had given birth to a daughter.

It is difficult to imagine this little girl growing up to become the man in charge of Akbar Ali’s household. Says Syeda, “It is said that she wanted to be called ‘dada’ instead of ‘dadi’. She started speaking in a guttural voice and grew a beard even.” There is a sketch of a telescope on display and Ray tells us that Qamar Zamani was known to spend hours looking through it at the world beyond.

Says Zakia, “Qamar was a tyrant. She made the rules of her own household and dominated to the extent that she did not allow her husband to come into her room during the day, something unheard of in those days.” The other rule she introduced was that the women in the family could not bring up their own children.

Zakia does not have an explanation for this other than it was atypical of Qamar’s highhandedness. But could it have been crafty domestic politics, a way of blunting any imminent battle for succession? Who knows? And when it was her turn to marry off daughter Jahanara, she ensured that her son-in-law stayed with them. 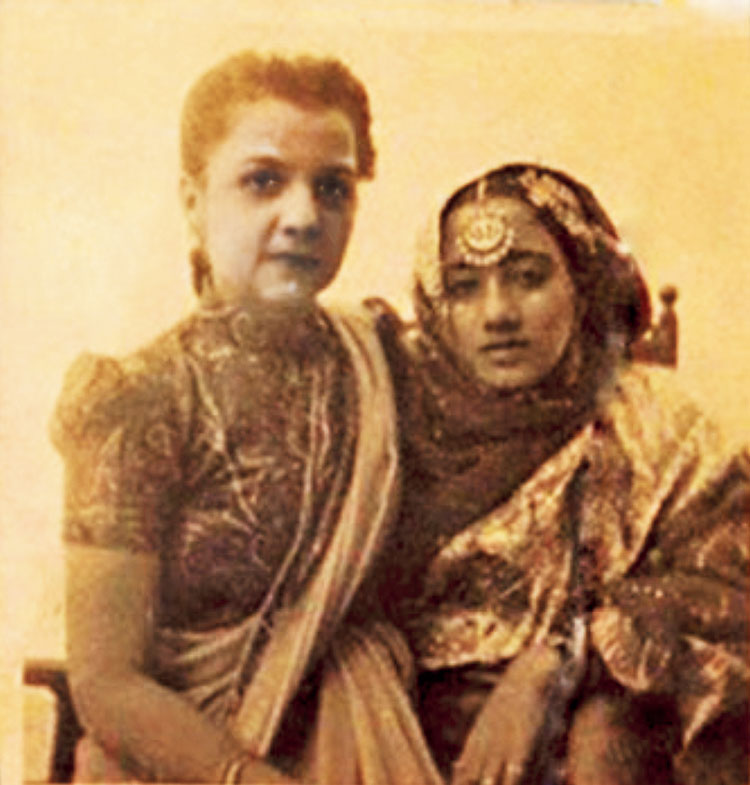 There are not too many exhibits from Jahanara’s personal collection — it is said she set fire to all her finery after her husband left her as he felt suffocated in his in-laws’ home. But the belongings of her granddaughter, Mumtaz, and granddaughter-in-law Shehzadi have been put on display. There are cloth dolls in all their miniature glory, including a wealth of dolls’ trousseau.

As visitors pause before an exhibit or a scroll, Begum Akhtar’s ancient voice fills the air; curator Ray says she belonged to the Rampur gharana. In one of the adjoining rooms, Satyajit Ray’s Jalsaghar plays on the giant flatscreen. Iffat Fatima, in charge of the audio-visual part of the exhibitions, says, “The clip from Jalsaghar I have chosen is one where a majlis is on. After all, a majlis used to be integral to Shia Muslim households of a certain time.”

Qamar’s true successor, as far as the spirit of matriarchy goes, was Shehzadi. Zakia tells The Telegraph how Qamar first spotted her while peering into her telescope and fell in love with her good looks. But as Shehzadi grew older, she came into her own. She went against Qamar and brought up her youngest child herself. She stopped wearing the burqa.

“It is said her friend, Rehana Sharif, who was one of the first women graduates from Aligarh Muslim University, helped her,” says Ray. Shehzadi also started socialising.

The book ends with Qamar and Shehzadi reconciling against the ruins of a golden legacy. The exhibition, however, is missing a crescendo or even a wrap. But curator Ray would have one believe that the abruptness is symptomatic of the final swift drizzle of the sand through a clenched fist and the consequent all-enveloping emptiness. Indeed, it is an empty feeling.