Advertisement
Home / Culture / People / The government is like a crazed pack of dogs chasing a car: Kannan Gopinathan

The government is like a crazed pack of dogs chasing a car: Kannan Gopinathan

Gopinathan spells out some very unpleasant realities without mincing his words 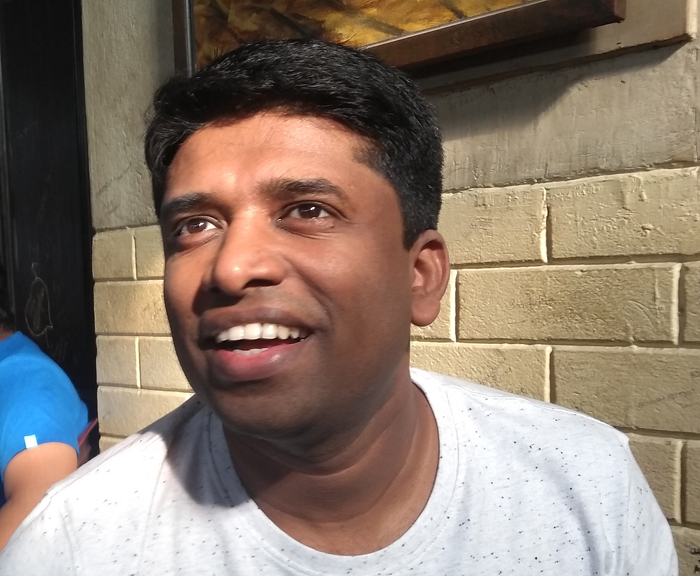 I find him on the second floor of Coffee House on College Street deep in discussion with activist Prasenjit Bose. The two cups before them have been emptied out, and a plate of chilli chicken is begging for attention.

Kannan Gopinathan is on his third visit to the city since he quit the civil services last August in protest against the abrogation of Article 370 and the halving of Jammu and Kashmir into two Union Territories. And though I know from his social media posts that he has found the time earlier on in the day to pay obeisance to a legendary sweet shop of the area, I am equally aware that his schedule is as packed as one of those bhaanrs full of Putiram’s mishti. Talk, followed by a visit to the anti-CAA sit-in by women at Park Circus Maidan, followed by another talk and then back to Delhi the very next day.

I remark on his summer attire — white T-shirt and jeans — and he replies animatedly how he forgot to pack warm clothes in his hurry. “Mahaul itna garam hai, I thought Calcutta will be hot,” he says flashing a grin.

Bose has just finished ordering another round of “infusion”, when a gangly young man comes up to our table and greets Gopinathan. He says in halting English, “I know you. I heard your talk in a video. Sir, you are very brave, you are my hero.” Gopinathan looks embarrassed, but he shakes the young man’s hand heartily and invites him to his next talk.

As the three of us watch the young man walk away, Gopinathan says, “Our country is looking for sacrifice from its youth again. It happened during the Quit India Movement. It happened during Emergency. And it is happening again… It is clear the government is rattled. And that is why they have unleashed the police on students.”

For someone possessed of a pleasant personality, Gopinathan spells out some very unpleasant realities without mincing his words. He is scathing in his critique of the BJP government, compares it to a crazed pack of dogs that will chase any car that enters the mohalla. He says, “They don’t know what to do when they get closer to the car. They start something and don’t know how to conclude or steer. They are so short-sighted that they cannot think beyond elections.”

He continues, “But CAA-NPR-NRC is going to be the most thoughtless act and they can’t even imagine what will happen to this exercise in hatred. It will also promote bribery and corruption as it did during the NRC process in Assam. Even if they identify, say, one crore of so-called infiltrators, what will they do with them? They can’t push them back to any other country nor can they build detention centres and feed them; they’ll need a whole state to keep them confined.”

Gopinathan’s sentences are peppered with questions, most of which are rhetorical. Even during his talks he throws around questions in chaste Hindi. Why have you come to listen to this talk? Are you anti-Hindu? Do you hate Hindus? When the audience answers with a resounding “NO”, he asks, “Then why are you protesting against the CAA? Isn’t it supposed to protect the Hindus?” He weaves his narrative based on the answers from the audience.

He tells me that according to him the most important thing is to ask questions and not accept any move by the government at face value. He says, “When demonetisation was thrust upon us, everyone should have asked what is kala dhan or unaccounted money? Most of us thought it is the money of the filthy rich locked away in Swiss banks. Nobody thought that the private savings of a daily wage labourer are also unaccounted for.” He urges people to ask questions about the proposed NPR and NRC. Who will be considered an infiltrator? Those who don’t have proper documents? How many Indians have the requisite documents?

In Gopinathan’s opinion, demonetisation was the beginning of a dogged othering policy of this government. He says, “During the demonetisation exercise the rich were the other. When the key provisions of Article 370 were abrogated, the Kashmiris were othered. Now with CAA, Muslims and Dalits are the other. The government has been thriving on infusing sadistic pleasure in a section of people who are encouraged to believe that they are not going to be affected; that they will be safe while others suffer. The idea is that we can’t do anything good for you, but we’ll make you happy by doing something bad for somebody else.”

In Gopinathan’s assessment, though, this othering, and the bluster around it, are all symptomatic of a “stupid” leadership. “Otherwise, why has the GDP touched the nadir, why is the unemployment rate so high? If you have a carefully crafted policy, how could you throw the informal economy out of track through demonetisation, foist a half-baked GST to derail the formal economy, and then abrogate provisions of Article 370 and impose a clampdown in Jammu and Kashmir to shatter its economy?”

Kashmir keeps cropping up again and again in our conversation. It is close to Gopinathan’s heart for he quit the IAS to protest against what was done to the state and its people last year.

At the time he quit as secretary of key departments in Dadra and Nagar Haveli, Gopinathan had told the press: “... Not that my resignation will cause anything even worth a flutter. But one has one’s own conscience to answer to, I guess.” Soon after, Karnataka IAS officer S. Sasikanth Senthil put in his papers, followed by Abdur Rahman, the special inspector-general of police posted at the Maharashtra State Human Rights Commission.

Gopinathan tells me he had never thought of quitting the IAS in his wildest imagination. “When I joined the service I thought being part of the government and the system gives you the best opportunity to serve people. But then I realised that I was just part of a sub-system; there is a larger political system. It is easier to influence this political system from outside than from inside,” he says.

However, the activist streak was always seeded in him. He talks about how while preparing for the Civil Service entrance examination in New Delhi in 2011, he participated in the India Against Corruption movement. He says, “I held placards, joined rallies, shouted slogans. But no one called us anti-national then. Speaking against injustice is the highest form of patriotism.”

Cut to the present. Needless to say, his former employers aren’t exactly happy with his dissension. The home ministry has chargesheeted him for alleged violation of several service rules, the funniest one being that he did not apply for the PM Awards for Excellence in Public Administration.

Then there were things like a delayed project or a missing tour report. Later, they added clauses in the memorandum saying his criticism of government policies had created an “adverse image of the country and affected India’s foreign relations”. Gopinathan claims he doesn’t care about these charges and has moved on. He says, “I am not going to waste time on a response to the memo.”

He adds, “When I was going to Aligarh Muslim University last month to deliver a talk, they detained me at Agra. While I was detained, they wanted to serve me the memo in person. I refused to accept it. I have moved on but they haven’t accepted my resignation. They’d rather have me dismissed on some flimsy ground.” He says he doesn’t care about the trolls and threats he receives on a regular basis from bhakts.

But offence cannot be a sustained defence. I ask him if public protests will succeed in bending an obdurate government. Says Gopinathan, “All these parallel forms of resistance — legal, federal and public — will surely work; one must not lose heart.”