'An actor, poet, theatre director, playwright, an elocutionist, he had tried his hand at so many things and always managed to achieve a level of perfection' 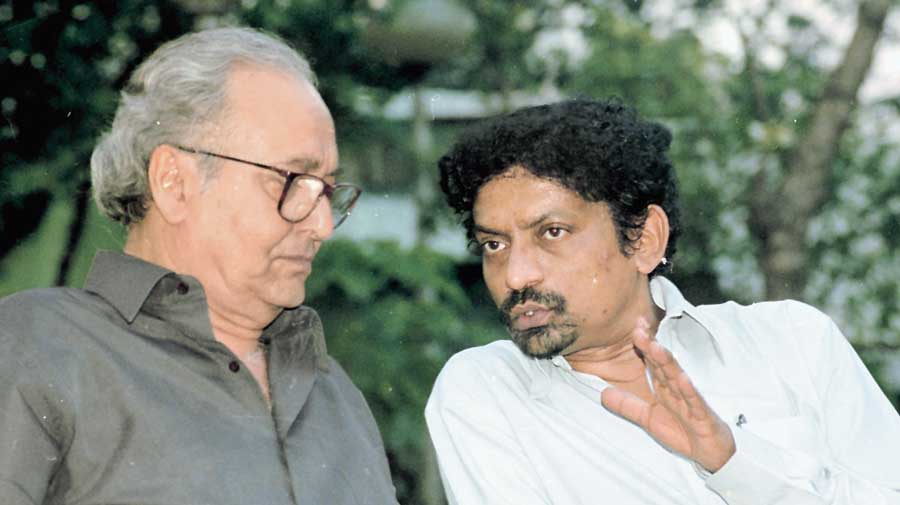 Soumitrada was one of the finest artistes of our time. An actor, poet, theatre director, playwright, an elocutionist, he had tried his hand at so many things and always managed to achieve a level of perfection. He would always work with so much joy, honesty, confidence and dedication. I actually saw him in person for the first time at Coffee House around 1968 or 1969. I was in college. Me and my friends would have adda sessions at Coffee House... and we would see one famous actor (Soumitra) drop by occasionally. He was surrounded by intellectuals.

He was then the editor of Ekkhon magazine. It was a very serious magazine... and that really fascinated me, that an actor was editing a (literary) magazine. How many actors do that? I immediately became his fan. Soumitrada was immersed in a creative world of literature, culture.

I directed him in my film Dekha. That was my first work with him. Dekha was made keeping him in mind because he was such a cerebral actor. In the film, his character (of an ageing poet, who suffers from glaucoma) inhabits a world of poetry. Soumitrada was a poet, so he could connect with the role. The film is about the seen and the unseen world.… The poet had ‘seen’ the world for many years but then he gradually lost his eyesight. The character then seeks solace in a world of memories. Soumitrada captured that space and vulnerability brilliantly. We did a lot of research, went to a blind school, consulted doctors and eye surgeons. Soumitrada did his homework so well, he was so dedicated.

He got the National Award for that performance in Dekha. I remember one day he called me over to his place. He showed me a letter from a woman who had written to him that her husband had gone through the same journey just like his character in Dekha, someone who had lost his eyesight. “Soumitra’s acting was perfect. He got every behavioural pattern right,” she wrote in the letter.

“This is like getting the Oscar, what can be bigger than this?” he had said then. It was fantastic.

After Dekha, I worked with him in other films too, and I noticed that he would immerse himself in preparation and homework. He is a director’s actor. He would deliver perfectly whatever one would ask of him. He had very high acting skills and a brilliant intellect... this combination made him so special as an actor.So for me, it was very easy to direct him. He would easily figure out what I wanted.

He was so excited about acting in my Abar Aranye (a sequel to Satyajit Ray’s classic Aranyer Din Ratri, the film starred Soumitra Chatterjee, Sharmila Tagore, Tabu, Subhendu Chatterjee, Saswata Chatterjee, Samit Bhanja, Jisshu Sengupta). The outdoor shoot was a nostalgic trip. Soumitrada shared so many amazing stories from the past. Three generations of actors came together.

Later, in our adda sessions, we would discuss literature, cinema, politics, social science... so many different things. I remember he used to maintain a notebook where he would jot down observations, notes on various things. We last spoke over the phone a few months ago. He felt this (Covid) world was surreal, bizarre.

We also took part in a webinar on Satyajit Ray. It happened on the day after my birthday (Goutam Ghose’s birthday is on July 24).

I had just crossed 70, and he pointed it out with a smile on seeing me. He had a great sense of humour.

He was such a celebrated, towering cultural figure but despite all the fame, was always grounded.

As told to Arindam Chatterjee

Goutam Ghose is a veteran, internationally reputed, National Award-winning filmmaker who has directed Soumitra in films like Dekha, Abar Aranye and Shunyo Awnko