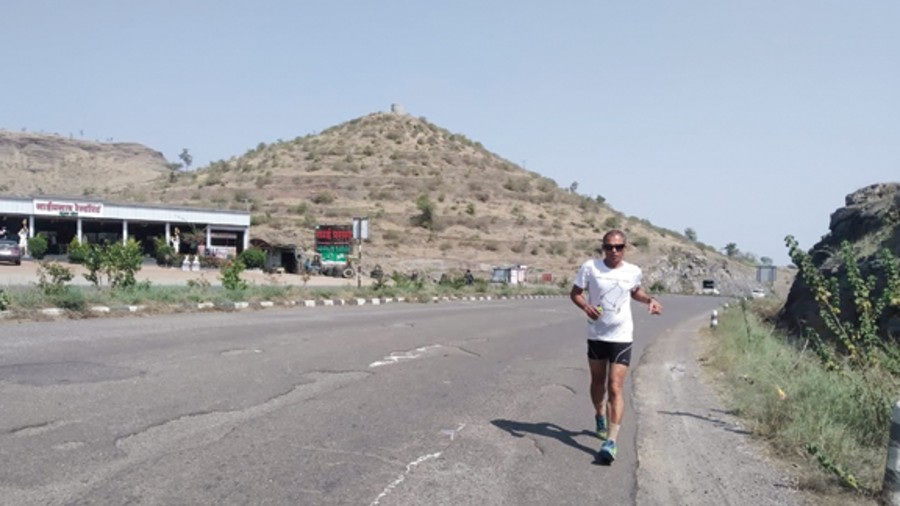 In an exclusive conversation with The Telegraph, India’s solitary ultra-marathon runner, Arun Kumar Bhardwaj, speaks about his motivation to run, the hardships of his childhood, the spiritual nature of his passion, his non-stop journey from Kargil to Kanyakumari, and much more!

You took up running at the age of 30, by which time most athletes are past their peak years. What made you take this decision?

When I was 29, my daughter was born. I wanted to do something special for her. Since my childhood, I have always appreciated sport; whenever I read the newspaper, I always turn to the backpages first. All this led me to think why not take up long-distance running and set an example for my daughter? That is when I surfed through all the records involving ultra-marathon runners and found that there was no Indian representation. Over time, when I began to compare my speed with that of professional runners in professional competitions, I realised I had a chance. Ultimately, the decision to take up running was to inspire my daughter. I think it is both my duty and my right to serve as an inspiration.

As a kid, were you involved at all in athletics and did you have any proper training?

None at all. I used to like sport and admire athletes from a distance, but I was quite a frail and weak kid myself. Between my time in the second standard and my second year in college, there was not a single year when I did not suffer from malaria. In the ninth standard, my weight was a mere 26 kilos. Doctors suspected that I had tuberculosis and my face began to distort gradually as well. I had a hole beneath my right ear that needed operating with a laser beam. So, in all, I had a really turbulent and difficult childhood, but that never deprived me of the desire to do something different in life.

In 2012, you became the first Indian to complete the Kargil-Kanyakumari ultra-marathon. Do you consider that to be the biggest achievement of your career thus far?

Yes, that would be right up there, alongside my victory in South Africa in the “Six-Day Race”. In South Africa, I had reached just one day before the race and had no helpers. Unlike the other participants, I was a vegetarian and on entering the community kitchen, I found that there was nothing for me to eat apart from sandwiches. So I sustained myself solely on fruits and honey for four days, before one of the organisers understood my plight and got some boiled vegetables for me. The conditions were treacherous in South Africa due to incessant rain, but on the final day, I managed to overhaul the leader by undercutting five kilometres. I knew that as long as I did not tumble to the ground, I had to keep on running.

As for the Kargil-Kanyakumari one, no Indian had done it before, and I wanted to prove a point. The brigade commander in Kargil had told me that it was impossible, especially with someone of my age (then 43) and physique. A lot of questions were asked about my diet, since I did not eat fish, eggs, or meat, so people wondered where I would get my proteins from for such a run. But I believed in my inner strength, in my philosophy to will myself to the finish line. When I was in Leh, there was not a single blade of grass to run on, with temperatures regularly below minus 20 degrees. Throughout my run, I kept thinking of the phrase in our Vedas that says “do not fear”. On three separate occasions during the ultra-marathon, I covered more than 100 kilometres on a single day, and finally, I managed to make it within the target I had set for myself — of finishing the entire run in two months.

How do you take care of your mental health and retain your focus during your excruciatingly long runs?

I believe that every single day is a single life. I make it a point to always wake up before the sun rises. Before a big race, I spend a lot of time reading the Mahabharata and the Bhagavad Gita. I try to seek good thoughts and keep my mind fresh and strong. One such thought is that whatever is mobile has life, whatever is stagnant is dead. Running, therefore, keeps one mobile and alive in the truest sense; it is not just physical, it is spiritual. When you have been running for days and the body starts tiring, it is the mind, the emotions, and the spirit that are inside you that make the difference.

How do you deal with pain and injuries?

I think of every mother that has undergone labour pain, which is supposed to be incomparable, and tell myself that if I cannot endure the pain of a run, I am insulting the tenacity of a mother. Even if I am really hurt, I do not resort to supplements or painkillers; I derive my power from the metaphysical, from my ideals. That is how I manage to recover.… At the end of the day, the biggest antidote to pain is patience, just as in life. A race, after all, is life in miniature.

Do you feel that as a country we need to significantly improve our infrastructure for athletes? And how do you think this improvement can come about?

Yes, we must improve our infrastructure. The government, private bodies, and every single one of us has a role to play in doing so. Across our villages, there are so many fields that are not used for agriculture — why not modify those spaces and use them for running? You cannot rely on the authorities to do everything, or else real change will never arrive.

Do you think that as a result of your running, your outlook on life and your perception of yourself has undergone a change?

I used to be a stammerer as a kid; even in office, I would be reluctant to receive calls. When at a pharmacy, I would always write down the names of the medicines since I was too shy to pronounce them. But after becoming a runner, I have noticed that my stammering has reduced, my confidence has increased, and I am far more comfortable in public. With respect to life, I have become much more optimistic and sure of myself. There is no doubt that running has changed my perspective. I now have firm faith in the idea that the more miles you accumulate, the more your mind can grow.

Finally, any message for all those who will be discovering your story and would like to know about your future goals and aspirations?

I would like to do the Kargil-Kanyakumari run once more, this time even quicker; but apart from that, I want to embark on a run around the world. I still feel young and I think I can get it done. But if I am to run around the world, I will need a lot of backing from sponsors, because considerable funds are required for all this. It is my hope that as more people read this interview and learn about my story, some among them will come forward as sponsors to help me realise my dreams.

Aged 51, Bhardwaj is the only Indian winner of an international multi-day race in history

Bhardwaj’s most memorable international triumph till date came in a gruelling “Six-Day Race” in South Africa in 2010, where he emerged victorious by setting a record time for a South Asian

In 2012, Bhardwaj made more history when he successfully ran from Kargil to Kanyakumari in an epic 4,100km journey, becoming the first Indian to finish an all-India ultra-marathon

A government servant for most of his life, Bhardwaj runs without any supply of supplements, medicines or first-aid kits

Most recently, Bhardwaj became the sole Indian to complete the Mumbai-Nashik-Pune-Mumbai run without pause, covering 560 kilometres in a staggering 166 hours

Your running role model: Zola Budd Pieterse, my daughter’s nickname is Zola after her!

The most important skill for ultra-marathon running: The attitude to never give up

Your favourite city to run in: Florida

The one thing you need most during your runs: Lemonade

The best advice you have ever received: Determination defies defeat