Cooking up a storm

Calcutta-bred, London-based chef Asma Khan on her quest for change through the kitchen 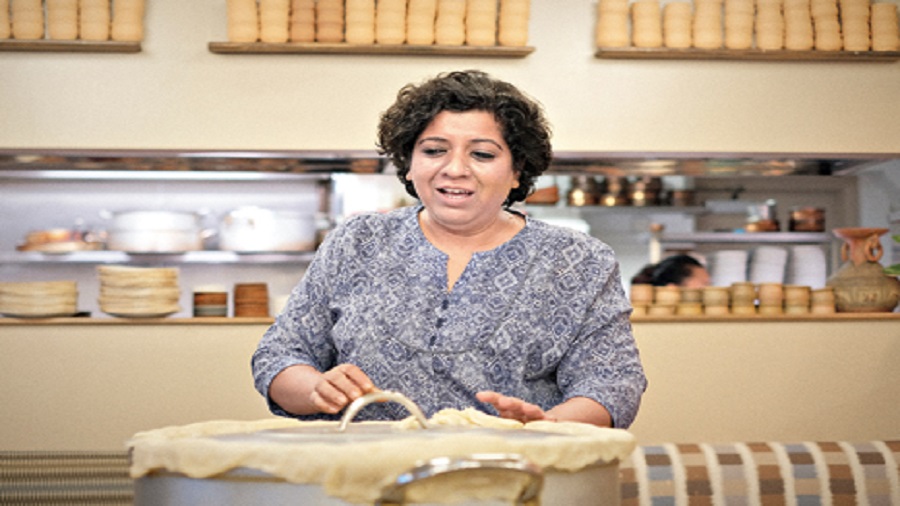 Early on in the episode on Asma Khan in the Emmy-nominated Chef’s Table, she is seen carrying out a big dekchi sealed with dough from the kitchen and setting it in the middle of her packed London restaurant, Darjeeling Express. All eyes are on her as she skilfully goes about the task of unsealing the vessel to reveal that it is filled with a kind of dum biryani that would put your wily #nomnom hashtags to shame as she says, “What holds that biryani together is faith.” By the time she is done with the sacred ritual of expertly mixing the layers of fine rice, spices and succulent meat before serving it to her guests, it has already made a biryani-unenthusiast such as me, a salivating believer. Soon after in the 46-minute episode, she says, “I think the world is big enough for everybody.” I watched this last year with the rest of the world but my virtual encounter with the Calcutta-bred, London-based chef recently buttressed my belief that perhaps it is this that lies in the core of her being, for Khan, 51, is so much more than just another south Asian chef in Britain, cooking her way into the hearts of people.

She has a sense of purpose with which she lives and a sense of warmth with which she feeds — and never does she fail to acknowledge the role of Calcutta in her life, which she enunciates during the webinar for LSG Table — A Shared Culinary Experience recently. With her is her all-women team that is cooking up a storm, one plate of Dum Biryani at a time, as Khan goes about working to usher in bigger changes. With the Second Daughters Fund and initiatives such as helping out in setting up a cafe in ISIS-battered northern Iraq that employs Yazidi women, Khan is resolute about addressing the two-pronged problems of racism and sexism. With plans of providing a footing to other women on the ladder of success, she is all set to act as an incubator and mentor to many, alongside her expansion plans for Darjeeling Express that will now open doors at Covent Garden and will operate both as a deli and restaurant. We caught up with Khan:

Tell us about the “trip of a lifetime” on a Royal Enfield around Europe that you had planned for your recent 51st birthday. How has this period of lockdown treated you?

I had been saving since 2012 to celebrate a significant milestone in my life with a solo ride around Europe on a vintage Enfield motorbike. For those who remember the motorbikes ridden by the police officers in Calcutta — they will understand exactly why I wanted to ride an Enfield bike. I came from a conservative family where I didn’t get to ride a cycle, let alone a motorbike. This was always my fantasy to ride into the sunset on a motorbike. I also have never travelled anywhere on my own. It was going to be my coming of age in some ways — an acknowledgement that I had actually achieved something in my life. Unfortunately, when the pandemic hit, the entire money I had saved for the trip and the bike had to be put back into the business to survive the difficult early months and pay my staff. I have no regrets that I will not have this journey. I am happy that I was able to comfort and support my staff through the pandemic as it gives me great joy. 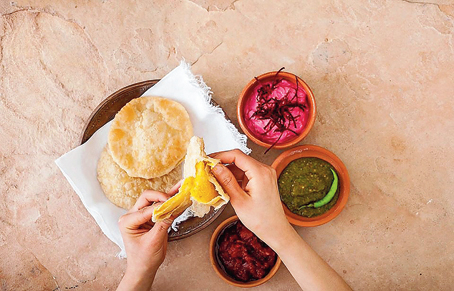 The menu at Khan’s popular Darjeeling Express restaurant in London is known for its authenticity of flavours and its home-cooked essence.
Sourced by the Telegraph

What plans of incubation do you have for Darjeeling Express, now that you have decided to expand it?

I want to set up a three-month mentoring programme, which doesn’t involve teaching people how to cook but how to lead teams. This is something I have learnt over the years and I want to teach women how to create and run food businesses. Not necessarily restaurants but businesses that involve food production, delivery, bakeries, etc.

What are some of your earliest food-related memories of having grown up in Calcutta? What place does the chaos and cacophony of the city hold in your heart now?

One of my earliest memories in Calcutta is standing outside of Nahoum’s in New Market, eating a Pizza Puff while my mother was shopping for her catering business. This was my treat — in fact, it was the only reason I went with her! I also have incredible memories of long drives down Red Road at night with my cousins going to Nizam’s behind New Market to have their Double Anda Kathi Roll. The chaos is the inspiration behind everything I do. Calcutta is, for me, the food capital of India. I was very lucky to be in the city in the 80s when the food you got on the streets and in restaurants did not have any fusion confusion. There was depth in the cuisine and the spicing so delicate and layered, like the memorable Chaap at Aminia.

You have always been vocal about how you don’t want your journey to just be about that of a chef. As a chef and change-maker, what are some of the biggest challenges you still face?

The biggest challenges I face are not to do with my own business. I feel a lot of work still needs to be done to change the bias against women in hospitality. This change can only happen if you have women who are decision-makers who understand the importance of diversity and equality. Sadly, too many women who get to the top, throw away the ladder and forget their own journey to the top. Through my mentoring programme at the new restaurant, media, and interviews, I want to be able to emphasise the importance of having women at the table. When decisions are being made, we need women speaking up for women. This is my challenge prevalent at the moment where it is very male dominated and female representation is low. I want to see this change. 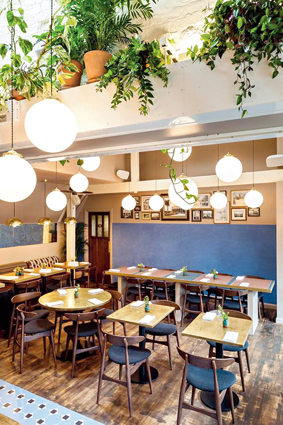 Darjeeling Express at London’s Kingly Court, which is now set to move to Convent Garden.
Sourced by the Telegraph

Women often end up as the custodians of recipes, and by virtue of that, custodians of emotions, cultures and history…
Recipes in families are most often passed from mother to daughter or daughter-in-law. The irony of it all is that often girls who marry into families where the food culture may be completely different are almost expected to replicate the food culture of their husband’s family, which is a reflection of patriarchy. This also requires the mother-in-law to teach.

How do you think the Indian “food”-scape is changing with time? What are some of the myths that the world still holds about Indian food?

One of the biggest myths is that our food is cheap and cheerful and this is something that a lot of ethnic foods are also associated with. There is a lack of understanding of the sophistication of our cuisine. It is very difficult because the early pioneers of Indian food were high-street restaurants in the UK and US, who tended to serve a generic Indian menu. Some of it was made up to suit the taste of local clientele — like the chicken tikka masala in the UK. There has been a brave fight back in the last decade by many chefs in the West, cooking Indian foods that have introduced and championed the regional cuisines of India. There is also a change in people’s perceptions as travel has become a lot cheaper and more people have travelled to India and experienced the variety of the cuisine.

What role does social media play in the culinary world today? How do you navigate those waters?

There is a positive and a negative in social media. You can clearly see when a restaurant’s design, lighting, dishes and presentation have been created to be “Instagrammable”. There is nothing wrong with that if the dish is more than just a pretty backdrop. It is far better if your social media reflects you and your cuisine authentically and it is not window-dressing. Social media is very important, as it is a way of directly communicating with your audience. I learn a lot from the comments and I try to respond to every comment on my page. I enjoy interacting with people this way and I think this may be something to do with where I grew up. In Calcutta, from a bus ride to standing in the middle of a market, people were always talking to you even though they didn’t know you. There was a comfort in communicating with strangers in Calcutta.

Since starting out in 2012 with your home-suppers, what has been your biggest learning and how would you like to spread that through your work?

My biggest learning is how important it is to believe in yourself. No one will believe in you if you do not believe in yourself. Fear is the one thing that holds a lot of women back; fear of failure and fear of being the first one to do anything. Every time I have hit a hurdle or a new challenge I fight the fear by remembering the successes I have had in the past and where I have overcome difficulties.

What are your future plans for the Second Daughters Fund?

The future plan is to try and spread the message in India but also to raise awareness among South Asian families in the UK where you still find evidence of gender bias. There are very large pockets of this country where families of South Asian origin suffer disproportionately in education and job opportunities. I would like to see more young girls and women aspire higher than their peers.