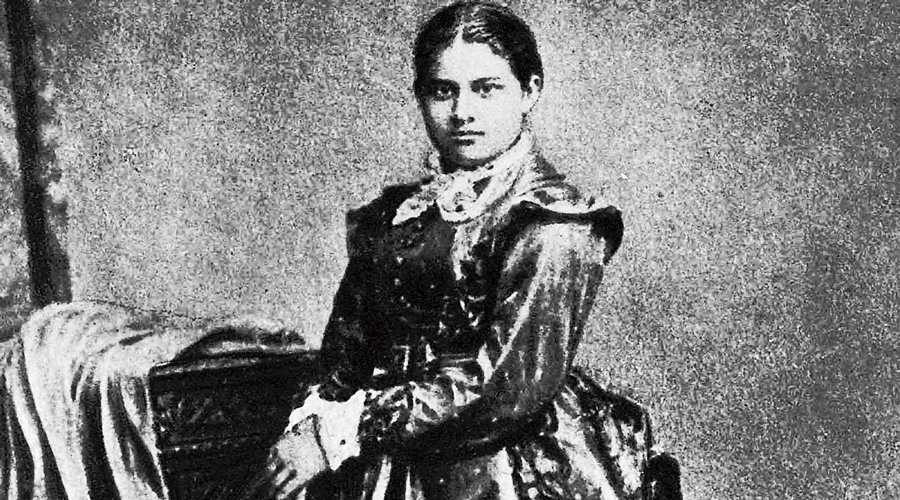 Toru Dutt can be considered one of the first practitioners of Indo-Anglian literature. In her brief but brilliant life she accomplished an impressive volume of work, written or translated into English.

Dutt was born to a Bengali Christian family in Calcutta. Her father had converted his family to Christianity when she was six. Dutt was the youngest of three children, after Aru, her sister, and Abju, her brother.

She was educated at home and learnt English and French, as well as Sanskrit and Bengali. She learnt John Milton’s Paradise Lost by heart as a child.

The Dutt family would be struck repeatedly by tragedy. In 1865, Abju died at age 14 of consumption.

But the family chose unusual journeys. From 1869 to 1873, they lived in Europe, in France, but mostly in England, also travelling to Italy and Germany.

Dutt and her sister would study French and music. The Dutts lived in Cambridge from 1871 to 1873.

In 1872, the University of Cambridge offered a lecture series titled “Higher Lectures for Women”. The sisters attended the lectures and also came into contact with the suffragist movement.

When they returned to Calcutta, Dutt was 17. She wrote furiously. She is the author of four works: A Sheaf Gleaned in French Fields (1876), Bianca, or the Spanish Maiden, serialised in Bengal Magazine from January to April, 1878, Le Journal de Mademoiselle d’Arvers (1879) and Ancient Ballads and Legends of Hindustan (1882).

A Sheaf Gleaned in French Fields was a collection of 165 poems translated from French to English by Dutt, except for one poem composed by her, and eight poems translated by Aru. Le Journal de Mademoiselle d’Arvers is the first novel in French by an Indian writer, and Bianca, or the Young Spanish Maiden is regarded as the first novel in English by an Indian woman. Ancient Ballads and Legends of Hindustan was a collection of her original poems.

But Dutt herself would not live much longer. She, too, died of consumption, when she was 21.

Except for A Sheaf…, all her work was published posthumously. A Sheaf… would later be reviewed and praised by Edmund Gosse, the well-known poet and critic in London.