A young woman training to be the church minister of Gangnapur

The village church is quite the focal point of this community 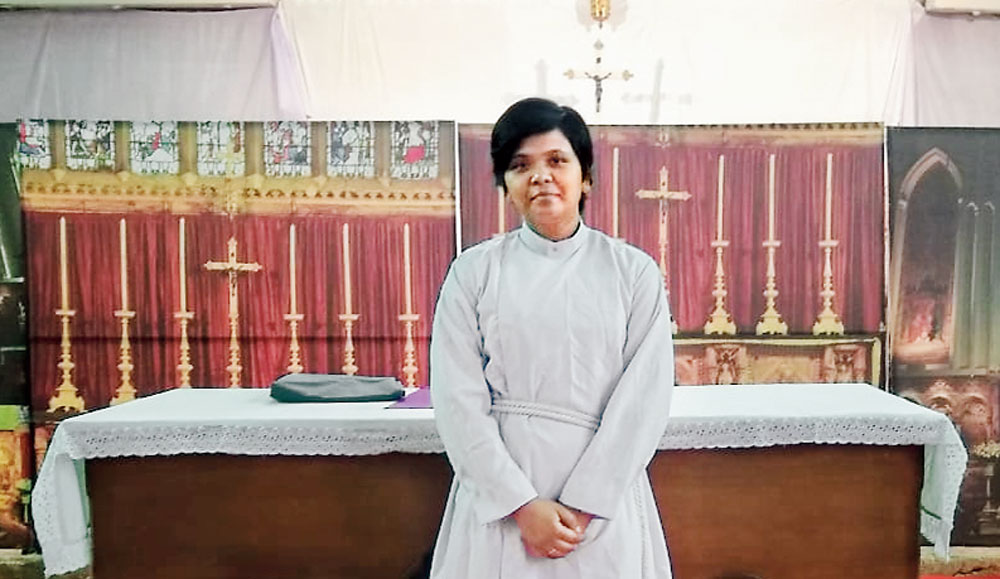 The book Three Men in a Boat makes for a good laugh, but three men on a single motorbike is quite another story. Adhish Halder, a friend and myself motorbike all the way from Ranaghat station to Gangnapur in Bengal’s Nadia district. Halder is our host and charioteer. As the ride turns precarious, he dials for help.

Some minutes later, Halder’s daughter, Atithi, arrives with her shiny new scooty. I am to ride pillion with her. Half-an-hour later, we reach the Halder residence. As we enter the compound, the aroma of freshly baked cake envelopes me. Atithi parks the two-wheeler, rushes into the house, and returns swiftly with a small tray full of homemade fruit cakes.

The Halders are Christians. Gangnapur has a large number of people from this faith. The village church is quite the focal point of this community. There is a robust turnout every Sunday and the Halders also join in.

Atithi starts narrating her story. How she was in Class X when she decided to become a priest. She is 24 now and pursuing a bachelor’s degree in Divinity from Calcutta’s Bishop’s College. On completion of the four-year programme, she will be ready to perform all church functions — thus far a man’s job.

Says Atithi, “Since childhood, I noticed that male priests preside over all our church functions. And that was and still is the case in other communities as well. I raised this question with our principal priest.” Atithi was surprised when the head priest asked her if she was just asking a question or would she really like to do something about it. She was, of course, being dead serious.

Atithi’s step towards priesthood possibly has to do with much more than a question, a counter suggestion and a follow-up course. It is context of course, but in her case, it is essentially predisposition.

Gangnapur is semi-urban; the economy turns on agro-based activities. Says Adhish, who owns a nursery, “With the rains being as temperamental as they are, crop failure is something we all fear.” He talks about how many a time, when the going is poor, his daughter tries to convince him to help the others in the community — the ones who are burdened with debts.

Atithi’s mother, Prabhati, tells us that the family living next door has a child with special needs. Payal is hearing and speech impaired. Atithi took it upon herself to school her. Prabhati calls out to Payal’s mother, an anxious-faced woman, who says, “I don’t know what will happen to Payal’s education once Atithi leaves for higher studies.”

Life as a student in Bishop’s College means Atithi has to attend morning prayers at the chapel, and lectures in Philosophy, Counselling, Sociology. Studies are not restricted to Christianity alone; she is also required to learn about other religions. One has to attend seminars that discuss communities and modern-day issues. There is practical exposure as well, so that students get a taste of the challenges of being a minister. Says Atithi, “I am the only woman student from Bengal. There is one more from Rajasthan. But most woman students are from the northeastern states. I am told one has to have a degree in Theology in order to secure a government job in those states, many candidates are studying the subject with an eye on those jobs.”

As a part of an exchange programme, Atithi will be travelling to Germany soon, where she will attend the international Student Christian Movement of India conference. And after graduating, she wants to apply for a master’s in Theology. And what does she want to do after her training? Says Atithi, “I am going to serve people irrespective of their religion, caste and creed. I wish to be their support and through my ministry, I would like to counsel them.”

The Gangnapur village church turned 150 this year. To commemorate the event in the first week of February, there was a congregation of communities — people from neighbouring villages were also present. Says Gangnapur resident R. Biswas, “By now everyone knows that a daughter of Gangnapur is readying to be a priest. Believe it or not, there was an unexpectedly large gathering in February; everyone wanted to see her.”