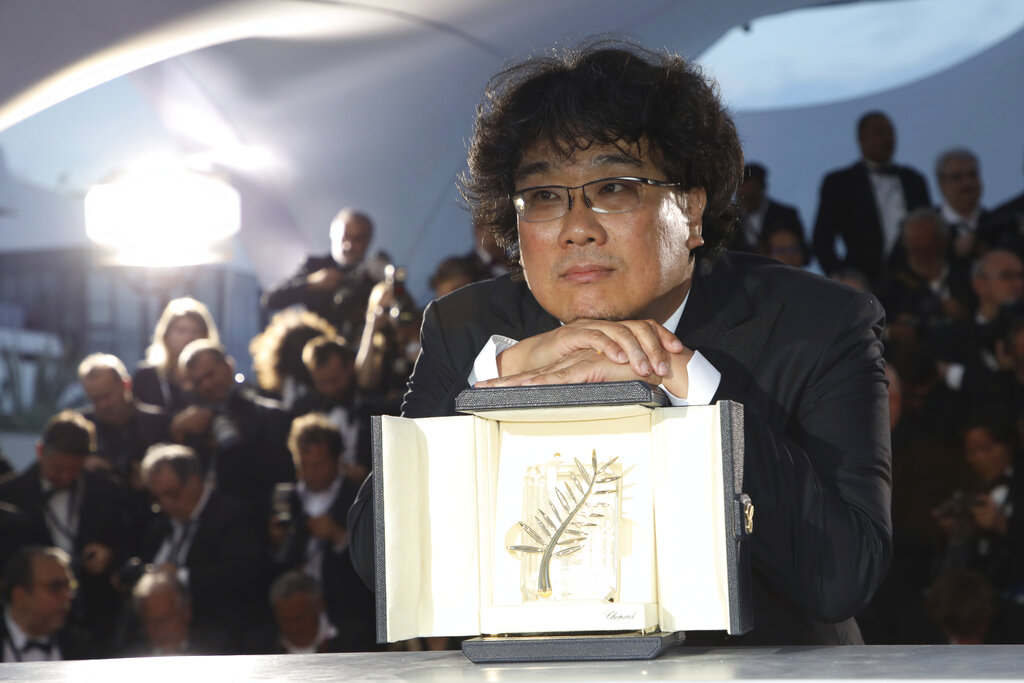 The win for Parasite marks the first Korean film to ever win the Palme. In the festival's closing ceremony, jury president Alejandro Inarritu said the choice had been 'unanimous' for the nine-person jury.

The genre-mixing film, Bong's seventh, had arguably been celebrated more than others at Cannes this year, hailed by critics as the best yet from the 49-year-old director of Snowpiercer and Okja.

It was the second straight Palme victory for an Asian director. Last year, the award went to Japanese filmmaker Hirokazu Kore-eda's Shoplifters, also a compassionate parable about an impoverished family.

'We shared the mystery of the unexpected way this film took us through different genres, speaking in a funny, humorous and tender way of no judgement of something so relevant and urgent and so global,' Inarritu told reporters after the ceremony.

Many of the awards on Saturday were given to social and political stories that depicted geopolitical dramas in localized tales, from African shores to Paris suburbs.

The festival's second place award, the Grand Prize, went to French-Senegalese director Mati Diop's feature-film debut, Atlantics. The film by Diop, the first black female director ever in competition in Cannes, views the migrant crisis from the perspective of Senegalese women left behind after many young men flee by sea to Spain. Sylvester Stallone presented the honor.

Although few quibbled with the choice of Parasite, some had expected Cannes to make history by giving the Palme to a female filmmaker for just the second time. Celine Sciamma's period romance Portrait of a Lady on Fire was the Palme pick for many critics this year. Instead, Sciamma ended up with best screenplay.

In the festival's 72-year history, only Jane Campion has won the prize in 1993 for The Piano, tying with Chen Kaige's Farewell My Concubine.

Best actor went to Antonio Banderas for Pedro Almodovar's reflective drama Pain and Glory. In the film, one of the most broadly acclaimed of the festival, Banderas plays a fictionalized version of Almodovar looking back on his life and career.

'The best is still to come,' said Banderas, accepting the award.

The Belgian brothers Jean-Pierre and Luc Dardenne, who have already twice won the Palme d'Or, took the best director prize for Young Ahmed, their portrait of Muslim teenager who becomes radicalized by a fundamentalist imam.

Ly has called his film an alarm bell about youths living in the housing projects of Paris' suburbs. Filho viewed his feverish, violent Western about a rural Brazilian community defending itself from a hard-to-comprehend invasion as a reflection of President Jair Bolsonaro's Brazil.

The Camera d'Or, an award given for best first feature from across all of Cannes' sections, went to César Díaz's Our Mothers, a drama about the Guatemalan civil war in the 1980s.

The ceremony Saturday brought to a close a Cannes Film Festival riven by concerns for its own relevancy. It had to contend, most formidably, with the cultural force of Game of Thrones, which concluded during the festival. The continuing rise of streaming was also a constant subject around Cannes.

Two years ago, Bong was in Cannes' competition with Okja, a movie distributed in North America by Netflix. After it and Noah Baumbach's The Meyerowitz Stories — another Netflix release — premiered at Cannes, the festival ruled that all future films in competition needed French theatrical distribution. Netflix has since withdrawn from the festival on the French Riviera. (Indie distributor Neon will open Bong's Parasite in North American theaters later this year.)

Bowing to pressure from 5050x2020, the French version of Time's Up, the festival this year released gender breakdowns of its submissions and selections. Cannes said about 27% of its official selections were directed by women. The 21-film main slate included four films directed by women, which tied the festival's previous high.

Cannes had its share of red-carpet dazzle, too. Elton John brought his biopic Rocketman to the festival, joining star Taron Egerton for a beachside duet after the premiere. And Quentin Tarantino unveiled his 1960s Los Angeles tale Once Upon a Time ... in Hollywood, with Brad Pitt and Leonardo DiCaprio, 25 years after the director's Pulp Fiction won the Palme d'Or.

Tarantino, who attended the closing ceremony, didn't go home empty handed. On Friday, a prominent pooch in his film won the annual Palme Dog, an award given by critics to Cannes' best canine.