The activist and filmmaker was speaking on the sidelines of the screening of his latest documentary, Reason 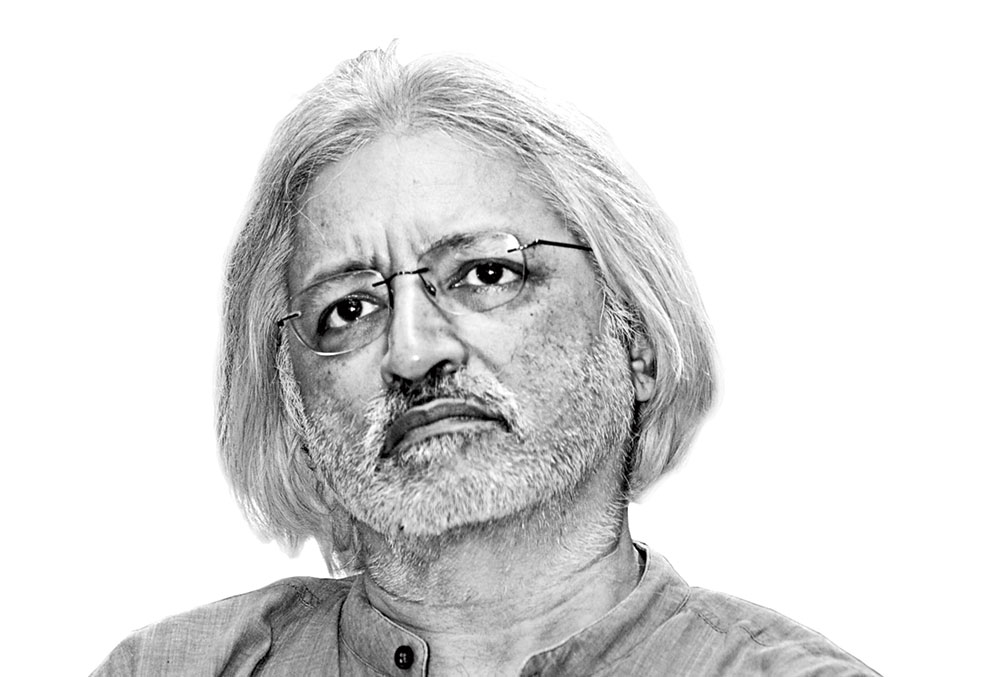 Anand Patwardhan’s latest film, Reason, is divided into eight chapters with names like Shivaji Kaun Thhe, In the Name of Cow, and so on
File photo by Anindya Shankar Ray
Paromita Kar   |     |   Published 21.04.19, 05:15 AM

The auditorium of Jogesh Mime Academy in south Calcutta was packed. Many had to be turned away because the aisles too were full. It was a hot Sunday afternoon, the documentary set to stretch over four hours, and the enthusiasm tangible. Anand Patwardhan’s latest film, Reason, was to be on screen. The Hindi name of the film is Vivek; it is divided into eight chapters with names like Shivaji Kaun Thhe, In the Name of Cow, and so on.

After most of the audience has left, I catch up with the filmmaker. We find space in a room adjacent to the auditorium — it is lined with pieces of broken furniture and sufficiently animated by mosquitoes. If you didn’t know, you wouldn’t guess that this soft-spoken, 69-year-old man with shoulder-length grey hair wields his camera like the sword.

With Patwardhan’s films, it is quite simple — what you see is how things are. Stark reality. You could say each film is a series of recordings — of events and responses — supplemented with archival matter, a straightforward voiceover and neat editing. There is no direct lambasting, only extensive footage painstakingly gathered. Truth is much more compelling than fictional presentation, says Patwardhan.

Reason takes off with Dr Narendra Dabholkar, the rationalist who was killed by Hindutva marauders in 2013. The chapter includes footage of Dabholkar’s talks and a candid interview with his wife, Dr Shaila Dabholkar. She recalls how she’d initially refused him because she would have to shoulder all financial responsibilities while he worked full-time towards erasing superstition and blind faith. She changed her mind a year later — couldn’t find a stronger man with more noble principles.

I ask Patwardhan about his continuing clash with State censorship, but he shrugs. “What’s the use of talking about it? This regime is impossible; not even one-thousandth of what I have to say would be passed,” he says in a dismissive tone, but says it nonetheless. How does he manage to shoot in hostile situations? There is a scene at a Sanatan Sanstha event in Kolhapur, where a man is screaming that his (Patwardhan’s) bones ought to be broken. But no, Patwardhan doesn’t feel the need to highlight that either. “No point trying to sensationalise,” he says. “We need to only talk about the issues. They should be common knowledge to all Indians, people should know these things are happening in our country.” And after a pause adds, “The media has failed to do its job effectively.” And the conversation finally takes off.

It seems the idea of compiling the goings-on as a visual document occurred to Patwardhan sometime after rationalist and Left-wing politician Govind Pansare’s murder in February 2015. “I felt there was a pattern,” he says. “I began to shoot extensively, and was also editing simultaneously.”

I quote a line from Reason that goes: “Hinduism is a dynamic composite of cultural practices, both indigenous and those borrowed from passing streams. Sanatan, Aryan, Vedic, Hindutva on the other hand, is a Brahminical project of supremacy.” All through his films and writings, he iterates that Hinduism is the mirror opposite of Hindutva. That is why he is eager to engage with people from the RSS. “If only they would agree to sit down for a discussion,” he says. “I had even tried it once… At a screening of Ram ke Naam at Max Mueller Bhavan years ago. BJP MP Tarun Vijay was invited to sit on the stage with me for a debate. Unfortunately, he ran away after the film.”

There’s an interview of Sartaj Mohammad in Reason that will stay with me for a while. I tell Patwardhan as much. Sartaj is Akhlaq’s elder son, a corporal with the Indian Air Force. The young man speaks at length about that fateful night when the local priest announced on loudspeaker that there was beef in Akhlaq’s house, and hell descended on them in a matter of minutes. He narrates how they managed to do what they did — “Maine papa ka antim sanskar kiya.” He talks about his teen sister, his respect for his country, of erasing divides. Did he need to prepare his answers, I ask. “Not at all. He is that kind of a human being. He always tries to see good in others,” Patwardhan replies.

Patwardhan also records the lone voice of remorse in Akhlaq’s village. A neighbour’s family expresses grief on camera. “But they did not intervene when the killing was happening,” he explains. Akhlaq, an ironsmith, was known to all in the village. People sought his help for little things like fixing an electricity fault at home, even in the middle of the night. “After the incident, the whole village turned against them. Clearly they can convert a peaceful place into a hate-filled one,” says Patwardhan.

It’s already past dinner time, and his friends from the People’s Film Collective, who organised the screening, sound us a gentle reminder. Also, the mosquitoes are having a good time — and Patwardhan is wearing black — but the conversation flows steadily.

Indeed, it is incredible how fake news has come to determine lives and thoughts. Says Patwardhan, “It’s coming top down. The man at the top is telling lies, and that is disseminated through much of the print and electronic media. So there’s a whole population that is encompassed by lies.”

Isn’t there a possibility of like-minded people in cinema coming together, and packaging honest work in a way it can reach a bigger audience? Films such as Reason get choked because they present hard facts, unpolished and unpalatable. And thereafter are mostly delivered to people sitting inside closed rooms. Sometimes mainstream cinema, like PK, too drives home the point. “I liked PK,” says Patwardhan, “It was a good film.” I continue with my random thoughts — is it not possible to look at other ways of delivering? So that there can be more meaningful cinema? Patwardhan is somewhat piqued. “Why don’t you ask it the other way round — isn’t there a need for the public to see this film?”

There are lots of people making cinema based on fiction, says Patwardhan, but fiction can only go so far. “If I made such a film on Narendra Modi, it wouldn’t be evidence. Reason is evidence,” he says. The film is making an argument and presenting evidence, he adds, if you turn the issue into fiction it loses credibility completely.

Although Reason is like a chronicle of the BJP’s disastrous rule, it also shows that the thought process has been there for over a hundred years. “The common myth is that Gandhi was killed because he always extended support to Muslims, which led to the creation of Pakistan. But what most people don’t know is that they tried to kill him seven times before they finally succeeded. They tried to kill him for fighting against untouchability. Gandhi had defiled his caste by doing and advocating manual scavenging. In 1932, he had combined with Ambedkar to introduce a reservation policy for Dalits. In 1934, the Brahminists tried to kill him.”

Patwardhan’s 1991 documentary Ram ke Naam shows the VHP’s campaign to build a Ram Mandir in Ayodhya. “They had begun with two seats in Parliament… Those were early days, the poison had not gone deep into the villages. In that film, you can see that the ordinary people were not with these guys… Now entire villages have been poisoned, the corporate class has collaborated. Look at what they have done to Kashmir — they have actually created cessation. IAS officers are becoming terrorists, school kids are becoming terrorists... This government has virtually given Kashmir away.”

Despite the reality check, he does not sound like a cynic. “I’m not stupidly hopeful, but realistically hopeful.” That’s why he chose to end Reason with Pansare’s quote: “Things have gone so bad that people will rise up.” Indeed, there are sparks of positivism throughout.

I am curious as to why the film hasn’t tickled the interest of the Opposition parties. As if expecting the question, he smiles an exasperated smile and says, “For the last few months I’ve been trying to get them to take an interest in it. Had I made a film that suited the BJP, they would have shown it in every gully. Barring the CPM in Kerala, few have organised mass screenings.” The film is available on YouTube.

It has been close to an hour and the filmmaker is evidently in no hurry to finish answering questions. He is also pleased with the huge turnout — “Calcutta is always different.” But his friends are anxious, there will be no dinner because all the eateries will close for the night.

As I step out of the building, a scene showing the demonstrations at FTII, Pune, comes to mind. A placard with a quote by Voltaire — “It is dangerous to be right when the government is wrong.” But it soon gets drowned in the reverberation from another one, an event to celebrate Gauri Lankesh, which shows many girls beating their drums in a huge open field. The sound is earthy, pulsating and galvanising. And that metaphor stays much longer.