The dying pulse of single-screen cinemas

While the era of single-screen cinemas is long over, in a country like ours, they still have takers 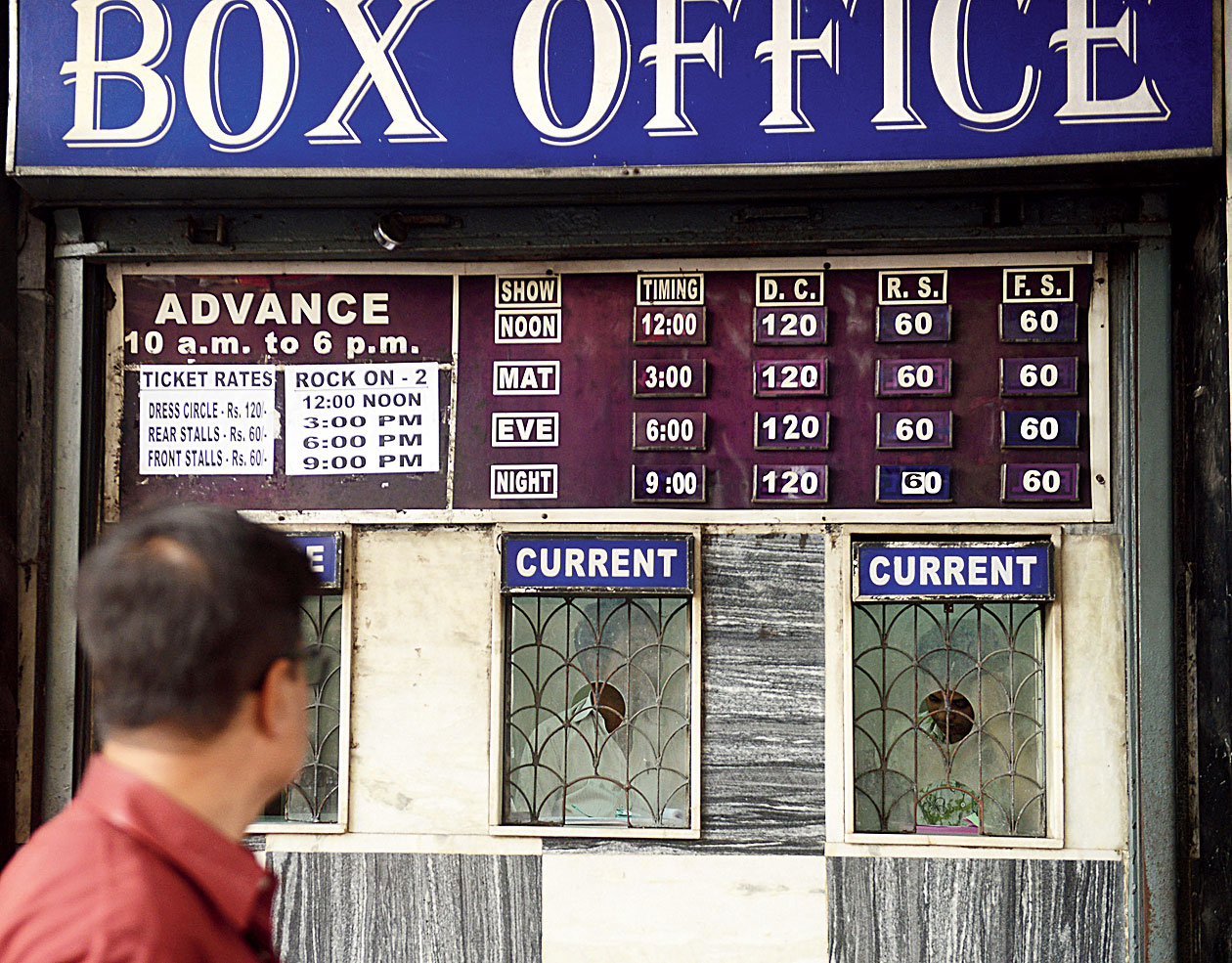 SHOW TIME: Antiquated they might be, but old-world halls with their reasonably priced tickets have their own niche audiences
Telegraph file picture
Swachchhasila Basu   |   Published 20.10.18, 04:47 PM

Two decades ago, a kilometre-long stretch of north Calcutta — Bidhan Sarani, formerly Cornwallis Street — had as many as 10 cinemas. Uttara, Sree, Rupbani, Radha, Purnasree, Bidhusree, Mitra, Minar, Darpana and Talkie Show House. It was no happy accident. This was, after all, a respectable middle-class neighbourhood, ready audience for the cinema halls.

In the paper, “Inside a dark hall: space, place, and accounts of some single-theatres in Kolkata”, Madhuja Mukherjee notes that Rupbani was built with European collaboration, included a state-of-the-art ventilation system and mechanism to control temperature. It was inaugurated and christened by Rabindranath Tagore himself.

Mitra began its journey as Chitra in 1931 and its inauguration was graced by Subhas Chandra Bose. Dipendra Krishna Mitra, the current owner of Mitra, tells The Telegraph how Bose had refused British security that day, forcing his father and grandfather to hire local toughs — Rajjak and Jamal — who otherwise sold tickets and managed queues during football matches at the Maidan.

Mukherjee writes that Bose apparently urged the proprietor, his employees, and the public to give less importance to foreign language films and focus on films made in Bengali instead.

Purnasree, Bidhusree, Darpana, Rupbani… The haughty consonants of the old-world names must have once conjured a fantastic world far removed from the regular. Today, they sound out of fashion, out of place, much like the surviving structures. Of the 10, only four remain. Rupbani has been demolished altogether. Most others have given way to shops, etc.

It is a given that the era of single-screen cinemas is long over. It is also a fact that in a country like ours, they still have takers. Not only have these not become redundant, each such cinema has been tweaked to serve a different purpose, to cater to a different audience.

Darpana and Mitra are only two buildings apart. Minar is bang opposite Mitra. But each has a distinct identity that reflects nuanced socio-cultural dynamics. “There are some patients who are physically dead, clinically alive,” says Dipendra Krishna.

At Darpana, the shutters go up only during show times. There’s no provision for either advance or online bookings. It doesn’t even have air-conditioning, merely feeding an appetite for C-grade films.

Dipendra Krishna points out that his audience comprises mostly lower middle-class people. “They are folks who do not aspire for a certain status symbol that multiplexes epitomise. They’ll come so long as they are given the basic amenities and comfort.”

Those that are somewhat better off may prefer to frequent Star Theatre, one of the seminal institutions of commercial Bengali theatre — the same that was destroyed in a fire in 1991 and reinvented itself as a cinema hall.

Cramped between tarpaulin and plastic sheet-covered stalls and eateries, Minar is barely visible. From across the road, the entrance looks like a giant yawn threatening to suck you into its dark interiors. The hall screens Bengali family films. The ambience is a tragedy.

Of these three, Mitra alone attempts to recreate the multiplex feel — modernised halls, 7.1 Dolby sound system, 2K projection, air-conditioners, fresh coat of paint, upholstered and pushback chairs complete with can-holders. With the most expensive ticket priced at Rs 100, other than locals, it attracts youth. Though its older avatar, Chitra, used to screen only Bengali films, Mitra opened up to Bollywood and Hollywood in the late 1970s. English films are no longer a viable option. Titanic was the last Hollywood film to be screened here.

Further up Bidhan Sarani, in a bylane stands Talkie Show House. Once king of this particular belt, it hosted English language films in its heyday. Today, most of the property has been let out to shops and other establishments.

A bemused Prosenjit Chatterjee in a curly wig, shiny clothes and mic in hand stares out of the poster of the Bengali movie, Kishore Kumar Junior, suggesting a change of menu.

At the other end of the stretch parallel to Talkie Show House is Khanna cinema, which has always served a Hindi-only fare.

Closer to the heart of the city is Chhabighar. According to Mukherjee, the hall with a seating capacity of 600 was deliberately constructed close to the Sealdah railway station. One of its major grossers was Satyajit Ray’s Goopi Gayen Bagha Bayen, which ran for 33 weeks at a stretch in 1969. Today, screenings of the Bengali Villain or a Baaghi 2 cannot even begin to fill the hall.

Dipendra Krishna does not buy the multiplex-killed-the-single-screen theory. He says he has data to bear up his claim. According to him, the decline in business of cinema halls ties in with the failing content of cinema.

A lot of halls had indeed closed down before Calcutta got its first taste of a multiplex — Inox at Forum Mall on Elgin Road — in 2003. The multiplex-and-mall boom followed thereafter. “In the West, they started demolishing cinemas from the 1960s. They figured it out much earlier,” says Dipendra Krishna and whisks out a foreign publication to prove his point.

Manik Barik is the owner of Jaya in Lake Town, also in north Calcutta. A relatively newer hall, it was established by his father in 1968. By the early 1980s, both Jaya and Gem in central Calcutta had an additional screen each, called Mini Jaya and Mini Gem. In hindsight, a futuristic move.

The present condition of the two cinemas seems to reflect the larger condition of single-screen cinemas in India. Dead, but not quite. Gem is a ghostly reminder of its past glory with its entrails literally scooped out. The shell had been hosting an art exhibition. In fact, the property is now rented out for exhibitions and other events.

Jaya, however, has risen phoenix-like and become a double-screen hall in the multiplex model and is on an expansion spree too.