Advertisement
Home / Culture / Heritage / Once upon a home

Once upon a home 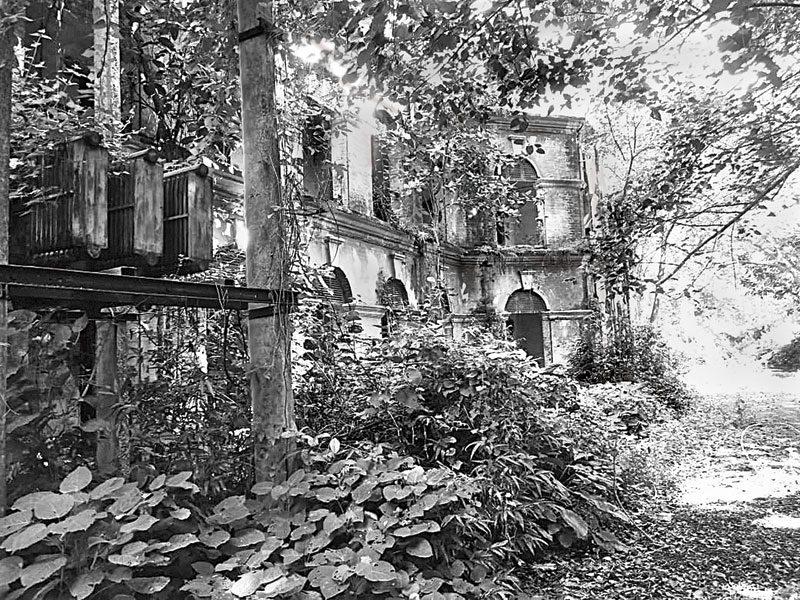 There is a house that oftentimes appears in my dreams. And no, it is not called Manderley. In fact, it is not a house at all, but an apartment building of the old fashioned sort. And most likely it never had a name.

On the banks of the Hooghly river, in the small town of Sahaganj, a subsidiary of the British tyre company of Dunlop had set up workshop in the early 20th century. The residential colony that overlooked the river was referred to as the “Compound” by locals. It had been built in the mid 1800s for the officers of the American Jute Mill. After the mill shut down, Dunlop acquired a large expanse of land in Sahaganj and set up a factory there and what was known as the “Estate” — a gaggle of red brick apartment blocks, a hospital, schools, a club, a swimming pool, a co-operative, a hostel for trainees referred to as the bower, playgrounds and everything possible that the employees and their families might need. It also acquired the Compound and its surrounding land.

The first time I stood before the green gates to the Compound I was no more than five. I remember looking up at the enormous gates with the spikes on top and the pink and purple bougainvilleas wrapped around them and thinking it would hurt real bad if I tried to pluck a flower and somehow landed atop one of those pointy things.

Upon entering the Compound, the first building to the left was the house that now lives in my dreams. We used to call it the Green Flat.

Like I said, it was an old fashioned apartment building. Three apartments on either side. The front of the building had two or three concrete stairs with a stump for a stairhead on either side. Those stairs led to a winding wooden staircase. A red mat affixed with brass clamps covered the wooden stairs. And whenever anyone climbed them, they heaved like a heavy heart.

One evening, before we actually moved into the Green Flat, we went by to see the place. A group of children were just wrapping the evening’s play. They crowded around to inspect me, the new addition. “Which house,” one asked. “Which school,” asked someone else. One boy, who was a head taller than the rest, said out loud to no one in particular, “That house is haunted. Those dark patches on the cement stairs outside, those are ancient blood stains.”

So many years later, there are nights when I am back at that very spot, just under the gulmohar tree, looking up at the faded green house in the purple dusk, and the house staring back at me.

It is never the same dream, though it is the same house. Sometimes I am outside, sometimes I am on the stairs, my hand on the smooth dark wood of the bannister. At other times I am running down the never-ending sun verandah of the second-floor apartment that was our home for 11 months. There have also been times when I have dreamt that I am inside the building next to it, a more modern structure referred to as the “Highrise”. Our apartment in the Highrise was at a level higher than the Green Flat, and in my dream I am looking down at the other house and I can feel it glowering back at me.

Everyone who ever lived in the Green Flat had a story, even some of the grown-ups. The smell of coffee brewing at odd hours. Voices. The bars of an invisible piano. Only one person I knew claimed to have seen something, and though she was one of the adults no one believed her. I remember her telling some of us how she had folded her hands and prayed to the white blur to leave her alone, progress to another world.

I myself don’t remember seeing or hearing anything, but there is a memory of an evening that comes alive in my dreams. It must have been just a couple of weeks since we had moved in. I was in my room playing or reading. When I was done doing whatever it was, I realised I was home alone. The next couple of minutes I moved swiftly from room to room. To this day I remember my mounting anxiety, the sound of my own beating heart and the drone of the cicadas. For some reason that day I couldn’t run out of the house but remained confined to the verandah, pasted to the net of the window, howling for my mother in some unknown fear.

Today, I don’t remember anymore how that evening resolved itself. No big deal I assume or else the parents would have told me. But in my dreams now, revisiting that moment I am sure of a presence dark and sad. An undiscerning presence that wanted to be friends with a scared little girl.

In our 11 years in the Compound we changed houses four times. All the other houses also appear in my dreams. And not just the houses, sometimes I dream of the Club House. The inside of the club, where we watched movies on Sunday afternoons on a TV with shutters and a VCR — Mr India, Moses, Ben-Hur — as we munched on jam sandwiches. This was also where a lot of the parties were hosted throughout the year; there was much dancing and one time Lanadi fell and chipped her tooth. Then there was the billiards-cum-library room. Every Christmas, this is where we put up chartpapers with cottonwool tufts to mimic the North Pole. On the lawn overlooking the club we acted out the nativity play, had fancy dress parades and quiz contests, while the grown-ups used it for lawn bowling and skittles over Abdulda’s freshly baked mince pies and trayloads of Bloody Marys.

I dream of these spaces but the tether always is the Green Flat. In my dreams sometimes I am on a rickshaw winding down the road before the Club. There are chairs and tables on the lawn, but there is not a soul in sight. I look to my right and I cannot see Nirmalda, the bearer, on the club verandah, and the doors are shuttered fast. Only behind me there is something, and I know it is that thing from the Green Flat. And it wants to get into the rickshaw with me.

In every dream I am egged on by the thing into areas of the Compound I never realised I had paid any attention to. Sometimes I am inside the Highrise lift — the one with the green doors. Sometimes I am amidst overgrown grass and I am thinking where is Maalibhai, the same who had a pock-marked face, called a bouquet, “booket” and wore a sky blue fatua and dhoti. Often I am walking down the road that connected the Highrise with the bungalows. The morum tennis court is to my right. The two copper sulphate benches are to my left. And I want to feel happy, because I am finally home. I know the road will rise at an angle soon and the bottlebrush tree will loom into view and if I walk on for another minute or so I will get to smell the magnolia outside Bungalow No. 4. But I can never get to the magnolia tree, and behind me I can feel the thing from the Green Flat, closing in, closing in, closing in.

In other dreams I will be approaching the bungalows from the club side. The narrow road that wound past the vegetable and flower patches. When I get to Bungalow 1, our last address there, I want to just burst in through the netted back door into the pantry and past the broom cupboard and up the stairs into what used to be our room.

One dream, surprise, surprise, I manage to get in. And even in my dream I am thinking, I am finally home, well, almost.

The door swings open but inside there are no lights. I walk into the dining room and I find the table laid out. I peep into the small drawing room and it is empty. I see the telephone table with the stolid black telephone — 3025 is our number. The facing window still has that lace curtain, I note with relief. The door to the other drawing room is half open and I can spy the blue carpet as I start to take the stairs. Even in the dark, even in my hurry I notice the three framed birds on the landing, and then I reach the top. But it is all dark.

On a whim I make a dash for the parents’ room. But where are they? The fans are turning, the ACs are on, the giant bed is made. There is the dresser with the oval mirror and the half mirrors on either side like angel’s wings and a heavy bottle of Oil of Olay. By the time I walk into the dressing room with the full length mirror, I am frantic. I stare into the mirror but I cannot see my reflection. It is so dark I cannot see my hands. And I am thinking I have to turn the latch, if I cannot find my hands how will I turn the latch? And I know the thing from the Green Flat is in there watching me fumble and panic. Waiting to pounce.

Last to last winter the Sahai siblings were in town after many years. They wanted to see Sahaganj and the Compound and, thereafter, some of us. “For closure,” all three of them chimed. It is from them that I learnt that the place is in ruins. “It was a dreary sight,” said Shippradi. “So many trees and bushes all growing wild. The club, the pool, I could see nothing. The Green Flat was a khandahar,” she added.

Jail for inaction on old houses in Calcutta

Wanted: A buyer who would reuse a 90-year home in Calcutta