Recently, a Santhal village in Birbhum killed the post of majhi haram or morol. We visit the headman of a nearby village 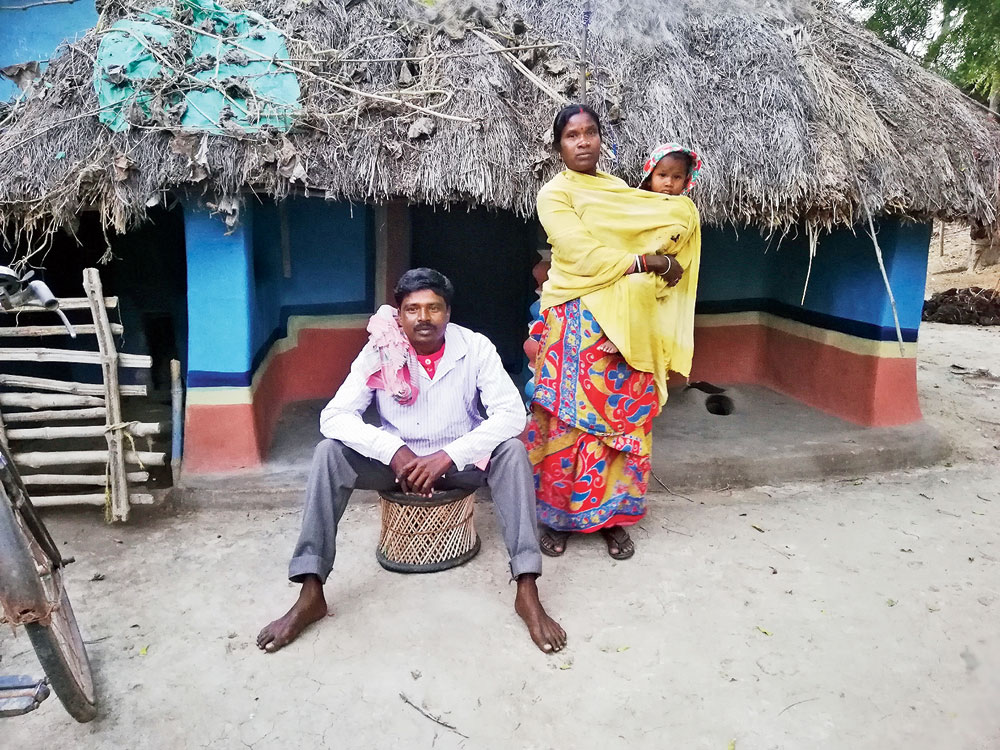 Gopal Nagar Dakshin Palli in Bengal’s Birbhum district is a tribal village. The drive from Bolpur town to the house of Nilu Mardi, the village headman, takes all of half an hour. The reason behind the trip — a recent report about another tribal village in this very district doing away with the concept of morol or village headman. Reports attributed the move by Chatormath village in Suri town to political interference. It also said that other villages were planning to follow suit. Nilu Mardi is a majhi haram, a term used to describe the headman of a Santhal village.

A majhi haram performs the role of a morol, but all morols are not majhi harams. Mardi hurries out of his mud hut, his hands folded in greeting. The 40-something moustachioed headman is of shy demeanour; he offers his visitors a charpoy and fetches a low cane stool for himself. Over steaming cups of milky tea, he starts to talk.

He says, “My father was a majhi haram and I have inherited the title from him.” According to him, the headman in every Santhal village is actually the religious head, selected quite literally by the higher powers. Mardi describes how a jaan or seer performs rites, which involves among other things blessing a magic stick.

The stick hops out on its own and stops at a house of its choice and the male head of that household is anointed majhi haram. Says Mardi, “One cannot assume or give up the title at whim. It remains in the family as long as it has to be there.” In case there are no male successors, the stick and the title are passed on to the son-in-law.

At this point in the conversation, Balu Tulu, a man of average build, not more than 60 years old, enters the courtyard. There is another mud hut facing Mardi’s home; the courtyard is common to both.

Tulu lives in the second hut; he is also a relation of Mardi. A concrete structure is coming up on another end of the courtyard — an uncommon sight in a village where there is no pucca house — which houses a common kitchen with two clay ovens. A little away from it, there is a generous stack of straw.

Tulu expresses shock and surprise at the fact that a tribal village has decided to do away the headman’s post. “Chatormath will actually lose the status of being a Santhal village in that case,” he announces to no one in particular. As it turns out, to date, in a Santhal village, money and social hierarchy is no great divider. Tulu speaks freely in front of the headman.

Mardi too does not seem to mind. “I am the majhi haram but he is an elderly person and in a Santhal village we always consult the elders and respect their knowledge,” he says humbly. The women of the family are sitting out too, witnessing the conversation unfold; from time to time there is giggling, oftentimes someone makes a point without any inhibition. “I have to preside over cases where one has stolen a morog (rooster) or a handi (utensil),” says Mardi and there is tittering all around. He also settles household feuds, big and small, and skirmishes.

The main issue these days, however, is inter-caste marriage. There is an unwritten rule among the Santhal tribes that if two adults marry without the consent of their families, then the families have to bear the consequences. Tulu says, “If two adults marry within the community, they are allowed to stay together but then both the bride and the groom’s families have to do the ritual goat sacrifice — the boy’s family has to sacrifice two goats, while the girl’s family has to sacrifice one.” But when the marriage happens outside the caste, there is a problem. “We generally call off the marriage and order them to stay apart. And if they refuse to listen to the village head, they are asked to leave the village,” says Tulu. But matters don’t end here. “Nowadays, aggrieved parties approach courts of law and even the panchayat. They also take the help of the police and are eventually allowed to stay on,” he adds.

The older man repeats what Mardi has already explained — that the majhi haram of a Santhal village is not a political post. “That is why political parties do not interfere in the works of a majhi haram,” says Tulu. So when a village in Birbhum has turned hostile towards an age-old Santhal ritual, we have to understand there are other reasons, he adds knowingly. Mardi agrees: “Let alone the police, the panchayat won’t even entertain a case from our village if anyone tries to bypass the majhi haram.”