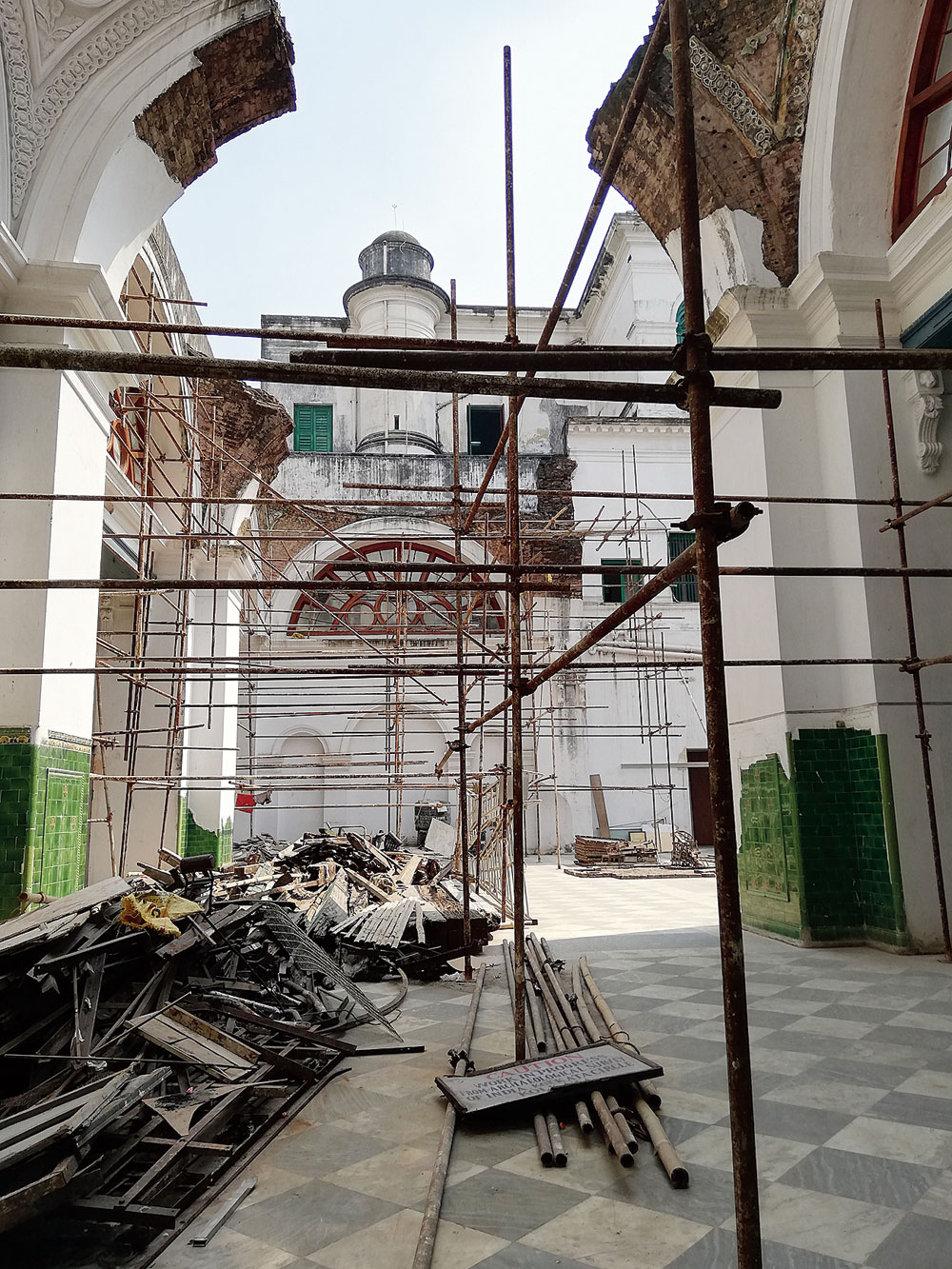 Renovation work is on at the Currency Building, which used to house the office of issue and exchange of government paper currency
Image: Moumita Chaudhuri)
Moumita Chaudhuri   |   Published 10.11.18, 08:57 PM

Once you turn into central Calcutta’s Mission Row from Dalhousie Square, there is no missing the majestic white three-storey building to the right. It used to be the first Currency Building of India, that housed the office of issue and exchange of government paper currency.

This afternoon some renovation work is on. We are told this is the first such initiative since the building came up in 1833.

The Union cultural ministry has decided to turn this heritage structure into an exhibition hall for the National Gallery of Modern Art. “It is an Italian style building,” says G.M. Kapur of the Indian National Trust for Art and Cultural Heritage (Intach), a non-profit charitable organisation. “A rarity given that most buildings in Calcutta from that era exhibit a Gothic style of architecture,” he adds.

The building, it seems, was constructed to house the Agra Bank, one of the oldest British Mercantile Banks. The plot of land was acquired in 1825 for this purpose. Prior to that, it belonged to the Calcutta Auction Co., an auction house for all sorts of goods and chattels.

The Long Depression was a period of worldwide economic recession, stretching from 1882 to 1885. We learn from Kapur how in 1886 the front portion of the building (facing Dalhousie Square) right up to the central hall was sold to the British Government. He says, “They were looking for a suitable building to house the first presidency office of the Currency Department.”

In his book, White & Black: Journey to the Imperial Calcutta, Soumitra Das writes about the central hall of the Currency Building with its many counters for notes, gold, silver and small change. He writes, “Old men remember how they would go there to change soiled notes. New note forms were kept in giant iron safes, and a working reserve of silver was kept inside a massive masonry vault fortified with two sets of iron doors and a grate of prodigious strength.”

In 1987, the Central Public Works Department (CPWD) declared the Currency Building, which now houses an office of the Archaeological Survey of India (ASI), unsafe. According to G. Maheshwari, who is the head of the ASI’s Calcutta office, Parliament had issued a protection gazette notification in 2002 but it was another three years before the building was handed over to the ASI.

She adds, “When ASI took over the building in 2005, it was in a terrible state. The CPWD had abandoned the building for quite some time. We found it full of undergrowth, its domes broken and the central courtyard all caved in.”

In his book, Das enlists the damages. He writes, “In between 1998 and 2003, the building did not only lose its three domes, the barrel vault, the single-storey portion on the southern side, the northeastern first floor on the eastern side and the joists, but it also lost its valuable Italian marbles, Burma teak furnishings, iron chests whose estimated cost would be over Rs 2 crore.”

Kapur points out how during one of the heritage walks conducted by Intach, someone noticed some sort of demolition work going on within the Currency Building. He says, “We immediately got in touch with (then) governor Viren Shah who in turn wrote to the urban development minister.”

Kapur tells The Telegraph, “There were plans to build a high-rise in that area but nobody would have gained from it anyway because the covered area of the building would have not increased dramatically. But a building with immense historical importance and archaeological value would have gone.”

This afternoon we spot four men on the pavement in front of the Currency Building.

Two of them are squatting and the other two are seated on stools. Before them, on a blue plastic sheet, is a heap of coins — 50 paisa, two, five and ten rupees — and new ten, twenty, fifty, hundred and two hundred rupee notes. They are exchanging torn and soiled currency notes for a small fee.