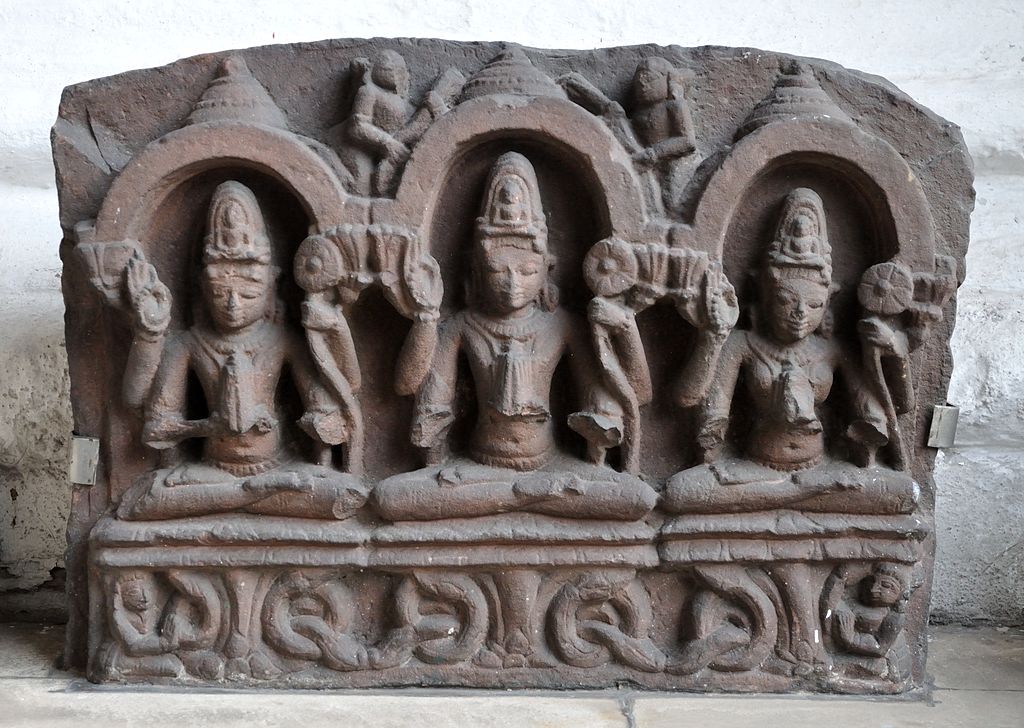 According to modern historians, the text was originally compiled by the great Buddhist scholar Abhyakaragupta between the 11th and 12th centuries. Abhyakaragupta was associated with the Vikramasila-mahavihar of present-day Bhagalpur district in Bihar. Says Guha, “The Caryapadavalis or Charyapad is accepted as the earliest example of Bengali literature. Its commentary begins with a salutation to Goddess Vajrayogini. Now, who is Vajrayogini? To know about her we must refer to the Sadhanamala. Therefore, it is necessary to translate the text into Bengali to know the Buddhist tantric tradition of early Bengal, which may also help render the socio-cultural scenario of that time.”

Chakraborty talks about the countless metal and stone figures and paintings of Buddhist deities belonging to the early-medieval era that have been discovered from the Indian subcontinent — Gangarampur and Mogalmari in Bengal, Vikrampur of Dhaka, Dinajpur in Bangladesh, Jolaibari in Tripura, Telhara (near Nalanda) in Bihar and Suryapahar in Assam are some such places. 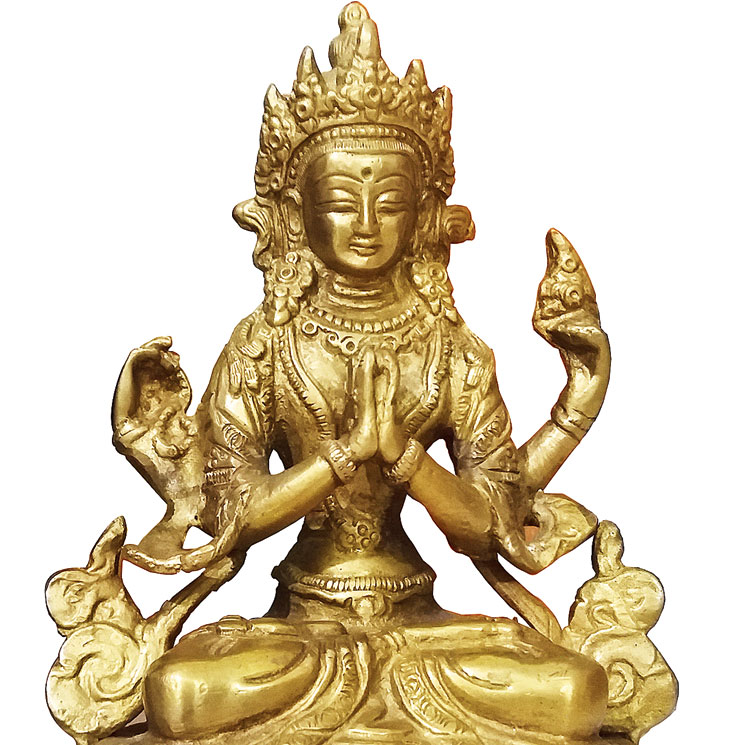 An idol of Sadaksari-Lokesvara
Image: The Telegraph

Priyanku Chakraborty is engrossed. He is examining a four-inch figurine. When he looks up from it, the research fellow in Buddhist Studies from Calcutta’s Asiatic Society says, “This is the idol of Sadaksari-Lokesvara and embodies the compassion of all the avatars of Buddha.” He points out how the four-armed deity is seated on a double-whorled lotus. How one pair of hands is folded in greeting, and the other two hold a string of prayer beads and a lotus, respectively.

“That this idol does not represent Vajrasattva, Maitreya or Manjusri or any other Buddhist deity is defined in the Sadhanamala, the text that deals with Buddhist tantric or meditative practices,” he continues. “If it was a figure of Maitreya, the deity would have been holding a Nagkesar flower; likewise, it would have had a sword had it represented Manjusri,” he adds.

Chakraborty knows. After all, he is working on the translation of the Sanskrit text, Sadhanamala, into Bengali — the first such attempt in any Indian regional language, according to him. Collaborating with him is Anindya Bandhu Guha, a Comparative Literature scholar. 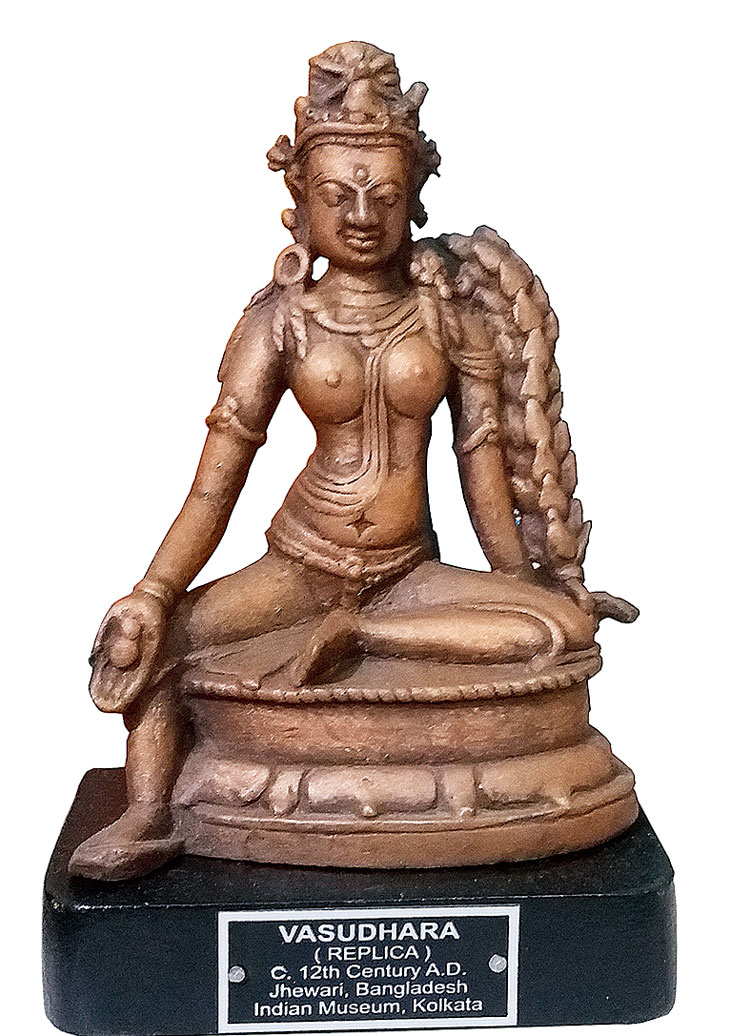 An idol of Vasudhara
Image: The Telegraph

Is Sadhanamala then a manual to help us identify Buddhist deities? “No,” Chakraborty is emphatic. “The descriptions are meant to aid meditation and enable one to visualise a deity,” he adds. There are 312 sadhanas or meditation practices outlined in the Sanskrit version of Sadhanamala.

But, till such time as there is no comprehensive translation of this text in any modern Indian language or English, there is no unveiling the munificence of the world of tantric Buddhism, which is an integral part of Buddhism. “And that’s the point of our effort,” says Chakraborty. He and Guha seem to think that the project will take another five years before it can be completed.

Sanskrit scholar and Buddhologist Ratna Basu tells The Telegraph, “The translation of an ancient text makes it more universal and accessible. This secularisation of the text is always a laudable attempt if the translation is sincere, to the point and accurate.” Basu herself is engaged in the English translation of the Sadhanamala.

However, Aiswarya Biswas, professor of Buddhist Studies at Calcutta University, throws in a word of caution. She says, “The Sadhanamala is a highly specialised Buddhist tantric text. Since translation is an academic initiative, we cannot discourage it, but I am sure a person well aware about the subject matter will not translate the whole text, especially the portions about secret practices.” Biswas is aware, though, that an incomplete translation may raise further questions. She says, “For all these reasons, a pioneer translator has a great responsibility.”

Basu does not share this cautionary stance. Her take is this: many ancient scriptures — originally written in Sanskrit or Pali or Prakrit — have been translated in the whole. There are iconographical descriptions of Brahmanical deities in the Puranas. Most of them have been translated into Bengali, Hindi, English and so on. We have Bengali and English translations of Brahmanical tantric texts such as the Saradatilaka-tantra, Hayasirsa-pancharatra and some others. “So why not the Buddhist tantric text?” she asks.

The Sanskrit used in Sadhanamala is non-Paniniyan — it does not follow the grammar of Panini — making it difficult to decode. Moreover, the Pali and apabhramsha languages are often used in the portion of the mantras and dharanis or chants.

Says Chakraborty, “Such language is a common feature of tantric Buddhist texts written or compiled in Sanskrit. Since Buddhist mysticism has already slipped into oblivion in India, a proper understanding of the text’s terminologies is quite difficult. Therefore, it is a sort of challenge for us.”