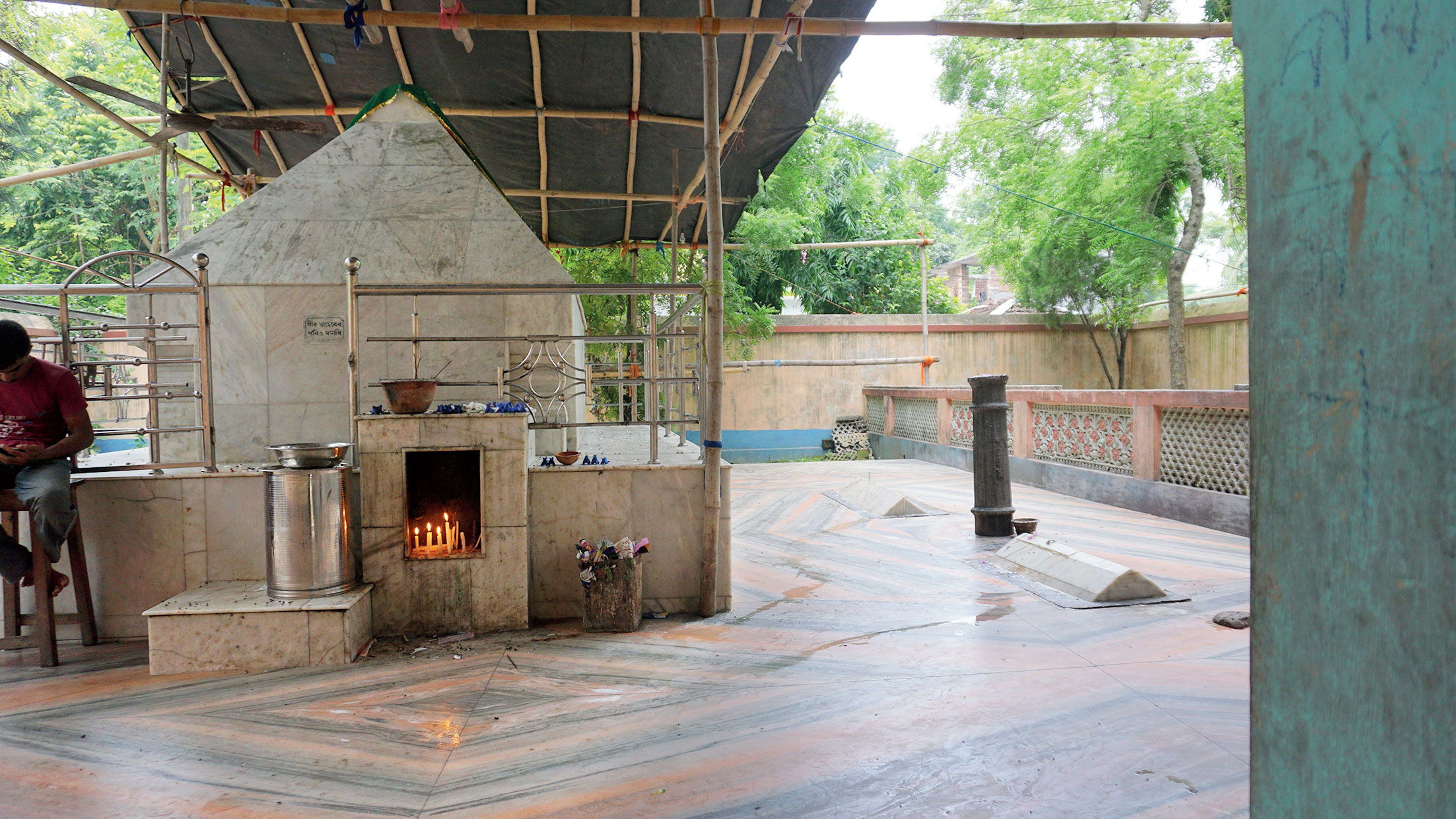 Matiari is a village beside the Indo-Bangladesh border, 110 kilometres northeast of Calcutta in Nadia district. It is believed to be the capital of the 16th century zamindar, Bhabananda Majumder, an ancestor of the legendary king of central Bengal, Krishnachandra Roy. A walk across the village today reveals remains of the regal past — a centuries old Shiv temple, a huge water body excavated by the king, relics of the palace and so on.

In the heart of the village stands Buro Saheber Dargah, a shrine built over the grave of Pir Hazrat Shah Malek Gaus, a Sufi ascetic from erstwhile Persia. Legend has it that in the 16th century this village was hit by a severe drought followed by famine. Apparently the pir’s spiritual power brought rain and saved villagers from starvation and death. Since then, starting from the anniversary of his arrival, a month-long fair is held every year at this dargah.

The date usually falls towards the end of June and coincides with the first day of Ambubachi, a three-day-long Hindu festival of fertility. During this period, around two to three lakh people visit the shrine to pay homage. Not just Muslims, people from all faiths visit the pir’s mazaar to pay homage to his soul and pray to have their wishes (mannat) granted.

I visit the dargah on the eighth day of the annual fair on a sultry afternoon. The entry to the mazaar is blocked with lines of makeshift shops of toys, snacks, utensils and sundry items — typical of any fair in the Bengal countryside. As I weave through the crowd, the sound box plays a song — Ke jabi ay choley ei Fakir Maular dorbarey/Niya premer mala re… O come to the shrine of the holy man/ With your garland of love…

The marble frame of the mazaar is adorned with chadars. Two women light candlesticks at the altar mumbling prayers and another is found pouring a bottle of milk on the grave. At the back of the shrine, a couple ties a stone with coloured threads on to a banyan tree.

“Our dargah has been a melting pot for hundreds of thousands of people, irrespective of caste, creed or religion, for centuries. We have visitors from across the border,” says Nitaipada Roychowdhury, president of the Dargah Committee and a resident of Matiari. The committee has 21 members — 11 Hindus and 10 Muslims. Roychowdhury is a retired teacher of the Matiari Banpur High School. He consults a diary and gives me the count: 90,000 people have already visited the shrine in the first week of the annual fair.

According to Roychowdhury, the pir was born Abdullah. He belonged to an aristocratic family. Looking for spiritual enlightenment, he turned fakir, left his home and embarked on a journey all the way to Hindustan. When he reached an ashram by the banks of the Narmada river, the saints initially refused to offer him lessons in Hindu philosophy because he was a Muslim. But his sincerity and perseverance eventually made the seers change their mind and accept him as a disciple. After deep study at the ashram and subsequent enlightenment, Abdullah started his journey eastwards to spread his newfound knowledge of a syncretic God.

The nongorkhana at the dargah
(Prasun Chaudhuri)

“Buro Saheb reached our village on the first day of Ambubachi,” says Raihan Mondal, a member of the committee. “Since there had been a drought, he asked the local zamindar to organise an annasatra or community kitchen for the starving villagers. Soon after this there was heavy rain and a bumper harvest.” The impressed zamindar bestowed on him the title of Pir Hazrat Shah Malek Gaus and requested him to settle down in Matiari. Today, to commemorate the community kitchen, youths organise a nongorkhana or langarkhana where food is cooked and distributed free.

That day Noor Amin Sheikh, who has come from Ranaghat, offers a fowl at the dargah. “We had prayed for our uncle who had been suffering from a strange illness. Now that he’s cured I have come with the offering,” he says.

Sandhya Das has come from Barrackpore in North 24-Parganas to make a donation of Rs 1,001. Her sister has done well in the board exams. She says after lighting a candle at the mazaar, “If you pray sincerely, Buro Saheb always fulfils your wish.” The walls at the entrance to the dargah display a number of marble plaques commemorating past donations. There are two plaques with the name of one Abdul Hai of Jhinaidaha in Bangladesh. There is one bearing the name of Pappu Sarkar, who donated an entire month’s salary after he got a government job.

Goats, fowls, shirni, payesh, sacks of rice, batasha and cash are donated to the pir. The dargah committee organises auctions of the goats and fowls. The fund raised is deposited in a bank account along with the cash donated. Says Roychowdhury, “We spend the money for the upkeep of the dargah.” Some visitors offer food and money to the sadhus and fakirs who throng the portals of the dargah. Fakir Mobarak Shah comes from Titagarh in North 24-Parganas every year. The foodgrains and alms he collects at the fair sees him through for half a year. Amal Giri also begs for alms with dozens of other sanyasins and fakirs.

The young people who organise the nongorkhana take me to the kitchen. This is run by a separate committee constituted of Hindu and Muslim youths in equal numbers. Ajay Biswas and Abbas Mondal proudly show me how they have been cooking chicken curry and rice for hundreds of people. They invite me to lunch. Says Ajay enthusiastically, “Yesterday we had cooked khichuri and payesh.”

Roychowdhury reminds me that the dargah attracts visitors all year round. “There’s been efforts by political parties to interfere in the management of the dargah committee, but we have been able to stave them off. We are also confident of fighting all fundamentalist forces should they want to disrupt the harmony created by Buro Saheb 400 years ago.”

Instances of dargahs looked after by more than one community abound across Bengal. Amit Dey, a senior historian and professor at Calcutta University sums up the tradition. He says, “This syncretistic tradition has deep roots in the society and culture of rural Bengal.” According to him, the daily grind of an agrarian society encourages people to co-operate with neighbours and people around them. He adds, “In their struggles for existence there is little demarcation of religion, caste or creed. The dargah is a space shared by members of two communities.”

I sit down for a meal of fowl curry and rice with Abbas, Ajay and others at the nongorkhana. The sound boxes at the dargah start to play the classic song composed by the Sufi minstrel, Lalan Fakir. It goes — Sab lokey koy Lalan ki jaat songsare/Lalan bole jaater ki roop/ Dekhlam na ei nojore... People ask, “What’s Lalan’s religion/Lalan replies, For the life of me I cannot tell.”