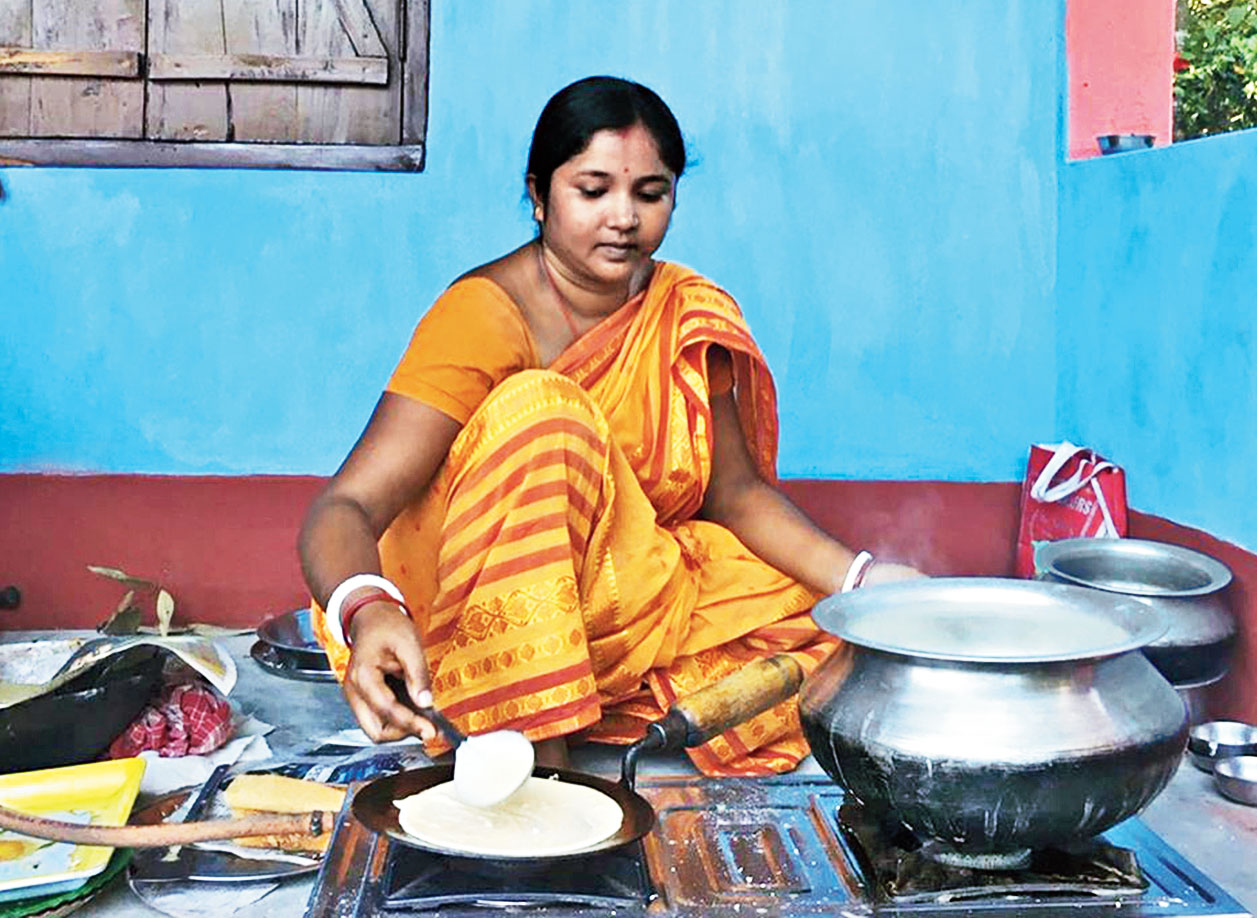 Rekha Rai and Hemlata Minch are two middle-aged women. They have come to Calcutta all the way from Madhovita in north Bengal’s Darjeeling district to share a taste of Rajbanshi life through Rajbanshi food. The Rajbanshis are primarily an indigenous tribe, to date dependent on wild plants as source of food.

Rekha serves the guests at the food workshop in Salt Lake a turquoise blue drink. It is made from the aparajita flower and is sweet to taste. She adds a squeeze of lemon and to everyone’s wonderment, the colour changes to a deep violet instantly. This is followed by appetisers, fritters of bok phul, yet another flower, and tea leaves. The batter is made of millet flour or rice flour, unlike urban India’s go-to besan.

In the meantime, in the open kitchen Hemlata is busy rolling the gopo roti or thupu, basically chapattis made of rice flour. On a tawa atop another burner, Rekha is making madua roti or marwa, another type of chapatti made of millet flour. The thupu resembles the litti but is sweet to taste, while the marwa is a brown pancake.

Rekha, who is the more talkative of the two, informs the assembled guests that the marwa is a fixture at all festive dos. She says, “Especially at Christmas dinner, when it can be had with a vegetable curry or spicy chicken.”

The rare time when Hemlata fights and overcomes her shyness, she likes to talk about Madhovita and Madhovita alone. “It is close to a tea garden and there are many other tribes who live there — Santhals, Oraons, Mundas…” her voice trails off.

It seems not long ago Rekha has started a women’s co-operative society in Madhovita. She explains, “We work in the tea gardens. And here, the work cycle is such that there is work for half the year and for the other six months you have to find alternative sources of income.” The co-operative started out breeding ornamental fish, it then diversified into mushroom cultivation and now it has a piggery too.

For the main course, Hemlata serves everyone a piece each of thupu and marwa, a curry made from tea flowers and spring onion, and a bowl of fiery red chicken, all of it arranged on a shiny brass plate. She does not seem too keen to talk about the chicken dishes though; those are apparently not integral to the Rajbanshi culinary tradition. Instead, she holds forth on something that is not on the menu — the sutki maachh, which she refers to as sidol maachh, both local terms for dried fish. She talks about the ritha maachh or boal maachh which the Rajbanshis cook with cauliflower; the chheka, a kind of dal made with leafy vegetables, sajna pata and kochu pata, and sukati saag, a dish made of dried jute leaves.

For dessert there is chushi pitha made from rice flour and kheer. Says Rekha, “We live in the plains and grow a variety of rice. Kalonunia, Radha Tilak and Miniket are some of the varieties. Chushi pitha is best made out of Kalonunia that has a natural aroma.”

What is not mentioned on the menu appears last. A frothy white drink, which the hosts introduce as rice beer. “It is made of fermented rice and we call it hariya,” says Rekha. For a little high at the end of a hard day in the tea gardens, no? She frowns thoughtfully and nods, “Yes, but more importantly, it is a digestive. We, Rajbanshis, eat healthy.”