Advertisement
Home / Culture / Bringing about a cultural intervention for unity

Bringing about a cultural intervention for unity 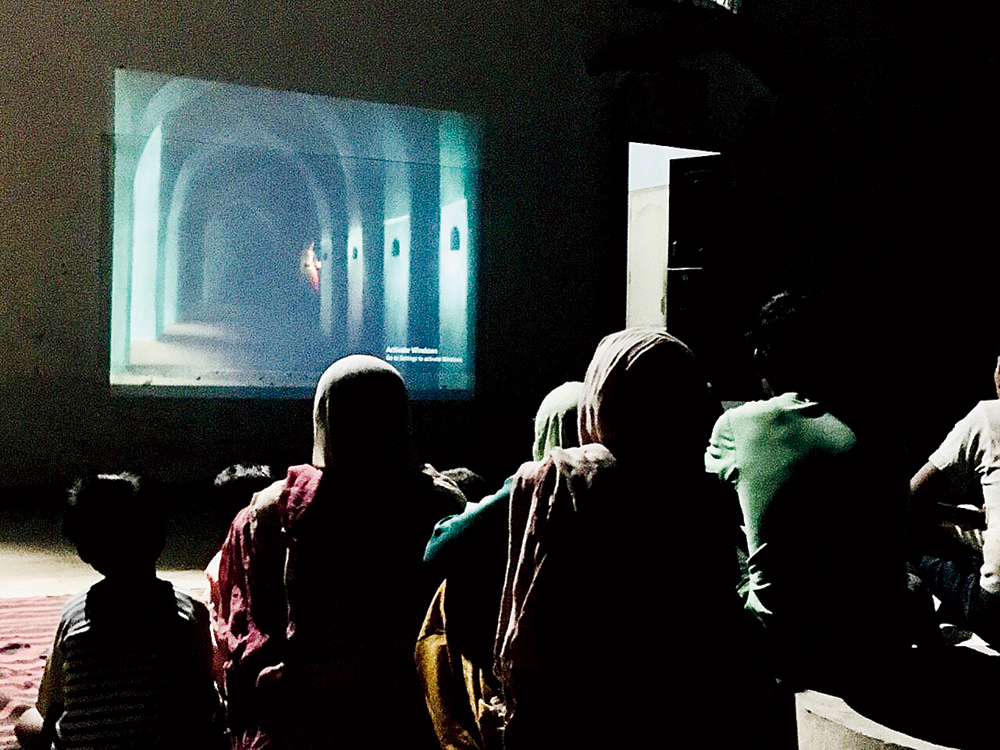 The time: six in the evening of December 6, 2019. The venue: the chaupal or open-air space of Khandrawali village in western Uttar Pradesh’s Shamli district. Men, women and children of the village have gathered to watch Anand Patwardhan’s Ram Ke Naam. The 1992 documentary is about Hindu groups gearing up for the demolition of the Babri Masjid in Ayodhya.

“This film asserts that politicians want us to fight over temple and mosque because when we stop doing so, we would demand education and employment, which the government cannot provide,” says villager Monu Kumar. “Unfortunately, the situation remains the same so many years later,” the 26-year-old Hindu Dalit adds.

The screening of the film has been organised by the local film and media collective called ChalChitra Abhiyaan. The event has special significance because it is the 27th anniversary of the demolition of the Babri Masjid. It has also been a month since the final judgment of the Supreme Court on the issue — a Ram temple is to come up on the site and the government is to give the Sunni Waqf Board five acres someplace else to build a mosque.

The members of the collective — five Hindus and one Muslim each from Shamli and Muzaffarnagar — are stirring up a quiet cultural movement. In 2013, both districts had witnessed communal riots that killed 62 people — Hindus as well as Muslims. Again both places were put on high alert immediately before and after the Supreme Court verdict of November 9.

The collective also organises folk musicals to spread awareness of fundamental rights, caste oppression and communal harmony. “Our aim is to start a conversation with the people, to make them aware of their rights, the politics of the country, the wrongs that happen in society and question them,” says Mohammad Shakib Rangrezz, a member of the collective.

Rangrezz was barely 16 when his house in Shamli’s Lisarh village was burnt down by his Jat neighbours on September 7, 2013. Sensing trouble, the family had left the village the day before. Eight of them took shelter in his uncle’s house in Kandhla, about 10 kilometres away. Eventually, the family shifted to a rented house in Kandhla itself.

Rangrezz’s father, who once owned a cycle repair shop, took up a job as an assistant to a local doctor. Two years ago, they built a house in Loni, 100 kilometres from Lisarh, but could never go back to where they belonged. “It’s a chapter of our life that keeps haunting us,” says Rangrezz, who is studying Hindi at the Janta Vedic Degree College in nearby Baraut.

Two years ago, when Rangrezz joined ChalChitra Abhiyaan, he took it upon himself to do his bit to heal wounds. “When the Ayodhya verdict came out, people of these parts were charged up. There were lots of heated discussions but the onus was on us, as a cultural organisation, to channelise any energy to something positive,” he says. According to him, local Muslims who privately shared their disappointment over the verdict put a check on their reactions. After much discussion, some of them suggested the five-acre land should be used for building hospitals and schools.

Rahul Sherwal, 22, is a resident of Shamli and another member of the collective. He went to schools driven by anti-Muslim sentiment and temper. He says, “But when I became part of the collective, myths about Muslims, such as they keep four wives or they produce multiple children or they will capture this country, were dispelled.”

The collective produces documentaries, interviews and live broadcasts on issues such as farmers’ distress and Dalit oppression, which are uploaded on their website. One such story was on how 28 Muslim houses in Kairana in Shamli district were demolished in an anti-encroachment drive. “We want this space to become a vibrant cultural hub too, wherein people engage in conversations on a host of issues,” says Sherwal. But there are many challenges.

There are logistical problems. “Members of the local units of the Rashtriya Swayamsevak Sangh have often disconnected the power supply before our film screenings,” complains Sherwal. But the biggest challenge, according to Rangrezz, is to convince people about the collective’s goal.

At times, ChalChitra Abhiyaan also works with a Left-wing association, the Naujawan Bharat Sabha. Together, they use folk songs to dispel myths about religion and caste. “Our songs talk about issues of farmers’ distress, discrimination against Dalits and unemployment. We keep reminding people that these are the real issues and not religion,”says Pravdendra Kumar of Naujawan Bharat Sabha.

Delhi-based filmmaker Nakul Singh Sawhney, who conceived ChalChitra Abhiyaan, says, “We have made a quiet cultural intervention and a transformation is taking place gradually and organically. But the real impact of such a movement would be understood only in the years to come.”

For now, Monu Kumar, who has witnessed migration of people from riot-affected neighbouring villages to his village, is happy to see Hindus and Muslims come together at the chaupal on the days films are screened. He says, “At least, people are ready to listen to each other, nobody is baying for each other’s blood.”