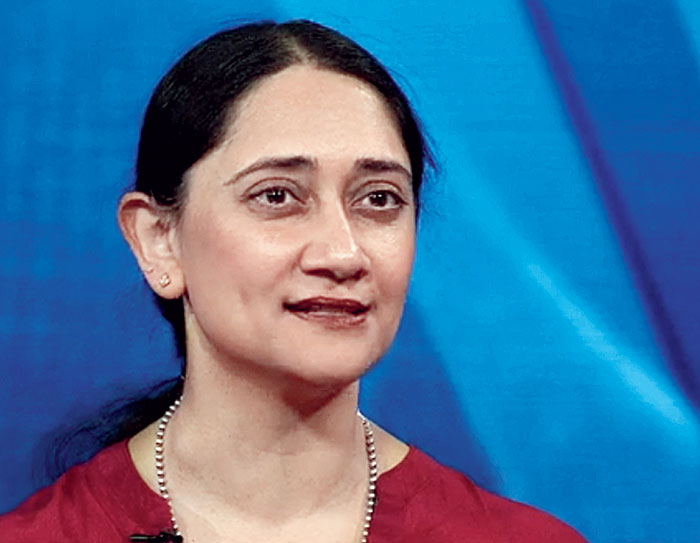 The statements preceding the verdict — about Hindus worshipping outside at the railing and Muslims worshipping inside — had led me to think there would be some joint arrangement: Neeti Nair
Telegraph picture
G.S. Mudur   |   Published 09.11.19, 08:46 PM

Neeti Nair, associate professor of history at the University of Virginia, the US, had waited long past midnight for India’s Supreme Court to deliver the Ayodhya verdict. Nair, who graduated in history from St Stephen’s College, Delhi, and obtained a PhD from Tufts University in the US, has been studying the challenges to secularism in India and is working on the legal and political history of “hurt sentiments” and blasphemy in India, Pakistan and Bangladesh.

The Global Fellow at the Woodrow Wilson Centre for Scholars spoke to G.S. Mudur about the verdict and the future of secularism in India.

Your first thoughts on the judgment?

A judgment in favour of the construction of a temple at the disputed site was to be expected given the political context in India today, the progress of the case, and recent trends in jurisprudence.

Yet I was disappointed at how, once more, the law has been used to convert an act — the destruction of the mosque — that the justices themselves deemed unlawful into a trust for the sole use of the Hindu community. The statements preceding the verdict — about Hindus worshipping outside at the railing and Muslims worshipping inside — had led me to think there would be some joint arrangement.

What impact do you think the judgment would have on either community? Will the ruling be viewed in terms of defeat and victory?

Yes, the ruling will be considered a victory for the Hindus. However, I don’t think most Muslims have very high expectations of India at this juncture.I doubt many will be surprised at the verdict. The judgment does grant the Sunni wakf board five acres in a prominent part of Ayodhya to build a mosque. I suppose this means that Muslims are not entirely persona non grata, in this instance at least.

It will be interesting to see the ruling in its entirety. Apart from a line in favour of secularism as a basic feature of the Constitution, do the justices have more to say on the matter? Have they anything to say against similar demands for mosque destruction and temple building in the decades to come? Or, will each case proceed like this one has -– with large-scale mobilisation, court-acknowledged unlawful destruction of religious property, and the final verdict in favour of the majority community?

You are due to deliver a talk in Delhi next month whose abstract starts by saying ‘Secularism in India did not collapse overnight’. Could you explain this and share your thoughts on how the court judgment might affect this process?

It depends on what you mean by secularism. In my talk, I will elaborate on the shifting meanings of secularism through the course of the twentieth century. Reports suggest that Hindus and Muslims in Ayodhya continue to live in peace and seem to take the increasing security presence around them in their stride. The extra police and security is apparently to guard against outsiders disturbing the peace in Ayodhya, as had happened in December 1992.

The Ayodhya issue has become, over the decades, so sensitive that it is hard to imagine what kind of troop deployment would have been required if the verdict had gone the other way. Having said this, I also believe that the Supreme Court has never been the sole arbiter of India’s destiny. Its judgment will determine, only in some measure, the fate of Indian secularism.

I conceive of secularism as a many-armed deity, if you will, not so easy to vanquish even after all these decades of striving. This is not to underestimate in any way the rhetorical power of the court’s declaration that secularism is a basic feature of the Constitution. For that iteration, one remains grateful.

You said secularism is not easy to vanquish. Does that reflect optimism about the future of secularism in India?

Let me put it this way. What is it that we, who still have faith in secularism, prize about secularism today? Distilled to its essence, Indian secularism is about living together, adjusting, allowing a little more room for each other, allowing each other to simply, and still, belong, on terms of equal respect and dignity. It remains the only conceivable ethic, along with federalism, that can bind us all --- Hindus, Muslims, Sikhs, Christians, Buddhists, Parsis, Dalits of every religion --- to the territory that is India.

I find strength in the increasing numbers of voices speaking up about the atrocities still being committed in Kashmir. The postcards that students at St Stephen’s and other colleges sent to Prime Minister (Narendra) Modi, for instance, may not amount to much, but if youth in India still find the Prime Minister’s office approachable, and are moved by their fellow Kashmiri classmates’ pain, there’s hope in that.

I find the work of human rights activists such as Harsh Mander, and the labours of lawyers and law students who have founded Parichay, a collaboration between law schools that hopes to use legal aid to assist individuals in Assam who are on the verge of losing their Indian citizenship, very inspiring. I also see the election results in Maharashtra and Haryana as indicative of a turn in the way the BJP is being perceived, especially in Maharashtra where there seems to be little appetite for sustained bullying.

How would you view the two events --- the 1992 destruction of the Babri Masjid and the judgment that will pave the way for a temple?

The 1992 destruction was a pre-planned, carefully thought-through, concerted attack led by televised mobs on what had become a powerful symbol of Indian Muslim identity as well as Hindu ressentiment. Almost half of India’s citizens today were not born at the time. What do they know of it and wish to know of it? Perhaps all they want, in 2019, is for this dispute to be resolved, to the satisfaction of all the major parties involved.

Today is also the date for the official inauguration of the Kartarpur Sahib Corridor. It is worth recalling that in the immediate aftermath of the destruction of the Babri Masjid, temples were subject to retaliatory attacks across Pakistan and Bangladesh. It is a measure of the distance travelled in Pakistan that it is now restoring temples, publishing books on its multi-religious archaeological heritage, and taking the initiative for the Kartarpur Corridor.

Where Pakistan, once dismissed as “theocratic”, can seek to forge ties out of respect for a minority (Sikh) community’s faith, it hardly behoves India, still claiming to be secular, to renege from its constitutional commitment to allow its minority communities the right to worship at their various religious shrines without fear of further demolitions. There is such a thing as moving forward, and beyond the recriminations of another age.