Paradise at War: A Political History of Kashmir leads readers up the meandering path of Kashmir’s political trajectory 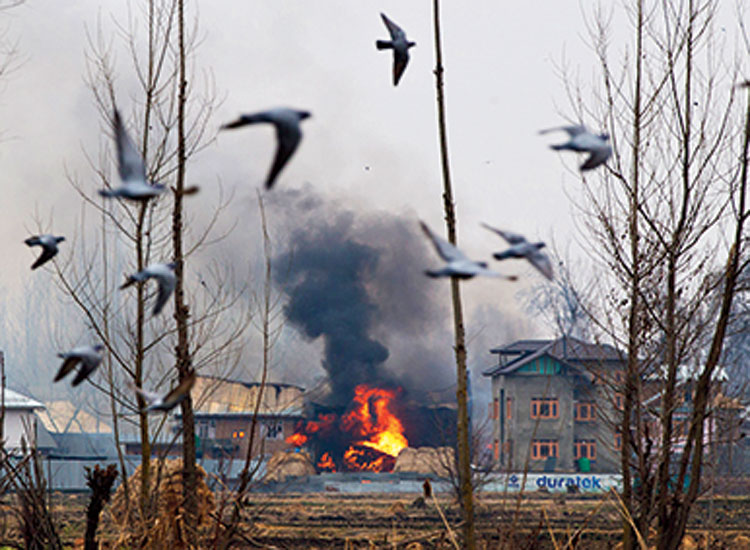 Flames and smoke billow from a residential building where militants are suspected to have taken refuge during a gun battle in Pulwama, south of Srinagar on Monday, February 18, 2019
Image: AP
Uddalak Mukherjee   |   Published 28.02.19, 07:04 PM

At a particularly dark hour in the frayed relationship between India and Pakistan, it would make sense for the hounds of war— politicians and television anchors — to go through Radha Kumar’s magisterial book on Kashmir, the troubled paradise that is the bone of contention between two bitter neighbours.

In a grand, knowledgeable sweep, Kumar, a historian, analyst and former interlocutor, leads the readers up the meandering path of Kashmir’s political trajectory. The ground she covers is exhaustive, beginning with the mythical allusions to the region through to the present turmoil. The tone remains dispassionate, almost clinical. This is an attribute that separates her work from other shriller analyses of the minotaurian labyrinth that is Kashmir.

None of the stakeholders is spared by Kumar’s unerring eye. Jawaharlal Nehru is faulted for his decision to take Kashmir to the United Nations as well as his treatment of Sheikh Abdullah; the Bharatiya Janata Party’s myopic, polarizing politics — the slide in Kashmir since 2016 has been precipitous — is exposed for what it embodies; Pakistan’s treatment of Kashmir is rightly castigated as “an unmitigated disaster”; the administrative failures, political and bureaucratic, are brought to light too.

Kashmir’s ill-winds also originate across the border. Kumar chronicles developments in Pakistan-occupied Kashmir and fuses them to the narrative unfolding in the Valley, enabling readers to join the dots. Interestingly, Kumar also compares Kashmir’s situation with other paradigms of communal conflicts — in Bosnia, Cyprus and Northern Ireland — to identify points of convergence and departure.

Kashmir’s tempestuous accession to India, the wars, the derailment of its democratic project, Hazratbal, Kargil, tentative peace talks, the Intifada and the flames fanned after Burhan Wani’s killing — Kumar does not ignore any of these treacherous bends. But Paradise at War is also an authoritative register of imperceptible, but significant, transformations on the ground. The reaction of Muslims in Jammu to the war in 1965 is a telling example.

Readers would want to know whether this intractable problem can be resolved. Kumar is hopeful of the template offered by the Aziz-Lambah framework, which “approached the territorial issue in a radically different way”. She also underlines the importance of dialogue among all stakeholders, a position that is untenable in New India. The chapter describing her experiences as an interlocutor shows that consensus and peace in Kashmir have formidable adversaries.

Paradise is likely to remain at war.

Paradise at War: A Political History of Kashmir By Radha Kumar, Aleph, Rs 799