Life in the tea estates of Ooty

Stories from the tea plantations of South India 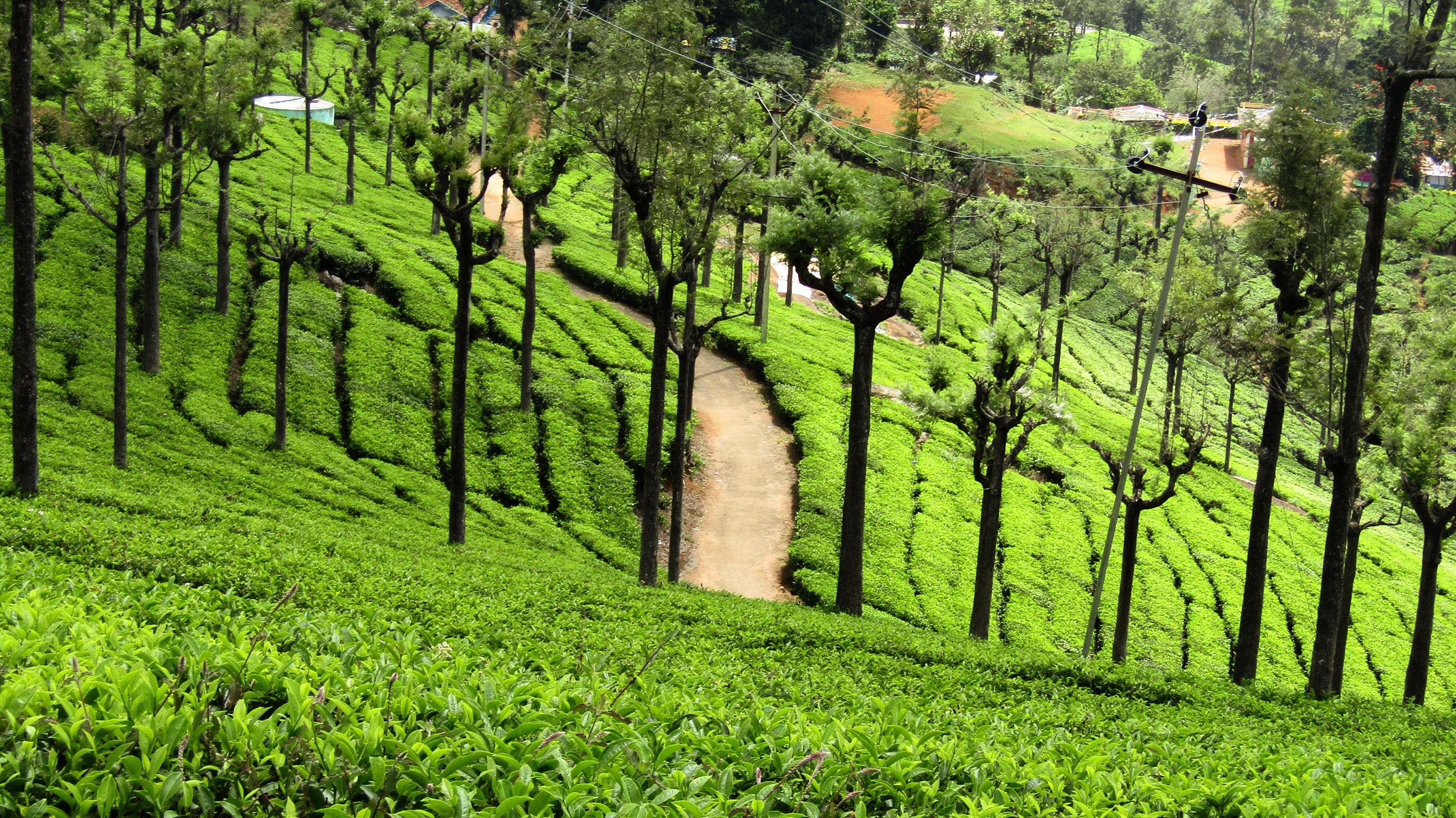 Kannan, splendidly clad in the uniform of the Estates and Agency Company, immaculate white trousers and coat with polished brass buttons, was waiting for me when I stepped out of the Blue Mountain Express at Mettupalayam railway station that bright September morning. He courteously helped me into a gleaming black Austin A30 with spotless white cotton upholstery that stood, proud and distinguished, among the other waiting vehicles, the Vauxhalls, Morris Oxfords, and Standard Vanguards, that were used in the Nilgiris in those days. As we started the climb up into the beautiful blue hills which would soon be my home, he blew the horn as we approached blind corners, or to alert an occasional vehicle passing by to give us room to pass. Every time he did so, he would politely say, “Sorry, sir,” eyes straight on the road ahead. I would later learn that Kannan had joined the company as a chauffeur many years earlier, bringing with him the discipline and decorum of his army background.

I had visited the Nilgiris for the first time three months previously, arriving in Coonoor by the Nilgiri Mountain Railway to attend an interview. Nervous and self-absorbed, I had remained unaware of my surroundings. Now, the dramatic landscape rose up to claim me, and become my future home. Having grown up in Madras, these surroundings were new and completely unexpected. I certainly knew the sea but had never seen a mountainous jungle before. As we climbed a winding curve up the 30-mile hill road from Mettupalayam to Ooty, I saw a board that said, “Hairpin bend 1/16”, and felt perplexed. Wasn’t a hairpin that thin, curved metal object that the ladies in my family used to secure coils of their long hair into what we called a bun? Accustomed only to crowded and dusty roads, it was astonishing to me that I was travelling on one lined with trees so thick on either side that light could barely penetrate through them. As the beauty of the environment enveloped me, I felt a rising thrill of adventure and perhaps it was this that protected me from the nausea that the winding road and increasing altitude might have caused a city boy from the plains. When Kannan stopped to fill water from a crystal clear pool, forming as droplets dripped into it from the mossy rocks above, the utter stillness and silence filled me with awe. Gradually, I became aware of a fresh, beautiful fragrance and a loud resonating sound. I would later identify the scent as that of eucalyptus; the sound came from cicadas.

It seemed that we were now about half-way up the mountain. The temperature had dropped, and I found myself feeling cold. A wafting mist engulfed the area and cars that approached could now be seen only because they had turned on their yellow fog lights. For a young man from Madras, this was a strange sensation, akin to climbing into a refrigerator – that new-fangled invention of recent times.

As the Austin A30 continued its climb, it began to drizzle, and then heavy rain began to fall. I had begun to doze and woke abruptly when the car came to a halt. It was nearly dark now, and I could dimly see that a huge tree, a doddamaram – Kannada for ‘huge tree’; more commonly known as Australian Blackwood or Accacia Melenoxylon – lay across the road, blocking our entrance into Prospect, where I was to join as a Trainee Assistant Manager. A group of men were crowded around it, two stood and sawed the trunk with cross-cut saws; two sat on their haunches chopping minor twigs with sharp hooked knives; the rest were diligently cutting branches with axes.

It was clear that this operation was going to take several hours; in the years ahead I would learn that a tree of that size could take three or four days to clear. Travelling from one place to another during this season would invariably mean many such delays, as the roads through the hills during the monsoon would always be strewn with trees blocking traffic.

Kannan reversed the car by a few metres, out of the private road that led into Prospect. Instead, he turned left at the fork and we proceeded along the main public road, driving all the way around, through the adjacent Liddellsdale Estate, also one of the properties belonging to the company I was on my way to join, until we had reached our destination.

Dance of the elephant

In the early 1970s, Estates and Agency was taken over by a Kapur family with business interests including hotels in Bombay and tea estates in South India. E&A’s holding of Prospect, Liddellsdale, Seaforth and High Forest were expanded to include Nonsuch, Terramia, Bonaccord and Ponmudi. Many significant events occurred following this acquisition, but the one which stands out most vividly in my memory is one in which I learnt that elephants have a sense of humour and will have a good laugh when something funny happens. And, that their cognition is so good that they can even sense a holiday!

I was at Seaforth when its new owners decided to harvest rosewood from the estate’s Yellamalai Division. Four of us chinna dorais – Victor, Nana, Cyrus and me, were deputed to supervise the operations. Chinna means ‘little’ or ‘young’ in Tamil, and dorai, or ‘master’ was the word used for the colonial bosses, inherited by Indian managers on the plantations. We were allocated different duties and set to work. Bulldozers, an innovation from the plains, cleared the earth and helped move the logs after they were cut. However, it was a time when technology did not have all the answers. The terrain was such that the traditional method of using elephants to do these tasks was still necessary.

Cyrus was given charge of the timber camp where elephants were picking the logs and placing them on lorries, dispatching them to Cochin from where they would sail across the seas in exchange for substantial gains. One day, as he walked behind his team of three elephants, a mahout warned him in a friendly way that his elephant Fatimakutty happened to be suffering a bout of indigestion. Sure enough, as if to oblige her mahout by supporting his words, Fatimakutty let out a loud rumble, roll and boom that harked of distant thunder, and sprayed poor Cyrus with a blast of hot air and gas. We rocked with guffaws when he later told us about this, and Nana in his inventive way would recount the story of how Fatimakutty had let fly and Cyrus, who had the misfortune of being in its direct path, reeled back spitting bits of bamboo and other semi-digested elephant excrement. He then proceeded to remove his glasses and lo, his face rendered green by Fatimakutty, had two white circles where his glasses had been.

The first tree that was felled was a magnificent specimen, its roots deep in the verdant valley which had nourished it so well that it had grown and continued to grow until the day when it lay amputated on the ground measuring 20 feet in length and 6 feet in girth. Crowds gathered and watched with awe. A log of that size would entirely occupy a platform lorry, with no space to spare for any other cargo. Whispers circulated furiously, speculating on the value of such an enormous, pristine log of wood. How would it be brought up to the road to be transported out? And then in came Fatimakutty, lumbering along, with her mahout sitting on her back. The log had been prepared with a tiny hole in it and a rope put through and firmly knotted. The other end was thrown up to go over the shoulder of the elephant who would then gradually heave the log up from the valley to the clearing where it could be loaded onto the waiting platform lorry.

The mahout coaxed Fatimakutty to walk, pulling the log along. It was a long struggle, a few inches at a time with intervals of standing still in between. As the intervals grew longer, the frustrated mahout shouted out angrily, demanding that everyone leave. The audience was quickly shooed away, leaving the mahout to do his magic and less than ten minutes later, the log had been hauled up and lay on the clearing.

We later learnt the mahout’s secret: a range of coercive measures to be employed in such circumstances, such as inserting a stick under a toenail – and worse. These he could not have done in front of such a huge crowd and Fatimakutty knew very well that as long as there were people watching, she was safe. And when the crowd left, she knew equally well that if she did not do as ordered, she faced the risk of torture, and quickly complied.

Now as it happens, Yellamalai, which borders on Gudalur, had a large stretch of virgin jungle that extended over more than a thousand acres, the Kathleen Jungle, which had been leased to E&A along with Seaforth by the royal family of Nilambur who, challenging the removal of trees on their property, went to court and obtained a stay order. Thus it was that, one week into the operations, a liveried court Amin – a traditional title given to officials who perform a range of court duties – stepped out of a forest jeep at a clearing in Kathleen.

To this day the scene is clearly etched in my mind. The foul smell of beedi smoke hung in the dense misty air. The rain continued to beat down relentlessly, falling on the rosewood too, enhancing the colour of the cut logs to a beautiful, glistening black. The freshly-moved earth was slushy and slippery underfoot and we had to repeatedly bend and pluck fattened leeches from our legs. How wonderful it would have been to have a cup of tea at this moment! Just then, the Amin arrived. Splendidly outfitted in a pure white coat with a blood-red sash on which was pinned a shining brass insignia, he unfurled the decree he had brought with him in grand style and read it aloud, bringing the operation to a grinding halt.

The three elephants somehow understood that the man in the grand uniform had declared a holiday for them. Fatimakutty, Khader and Kannan raised up their front legs and stomped around in a happy dance, trumpeting what were clearly chuckles of glee. And then, to the helpless consternation of their mahouts, they ran off to their camp to relax for the rest of the day. And who could blame them? Nobody ever enjoyed micromanagement and bullying styles of getting work done!

Today Kathleen is a settlement of homes and fields which have been cultivated over the decades to produce spices such as cardamom, ginger and pepper. The historic dance of the elephants, witnessed by four young chinna dorais among a huge crowd of rivetted locals today offers tourists, oblivious to its recent past, an opportunity to enjoy a break from their city lives.

Excerpted from An Elephant Kissed My Window by M. Ravindran and Saaz Aggarwal, with permission from Black and White Fountain

Back then, at the burra bungalows of tea estates