Worldwide, about 40 casts exist of the world-famous bronze sculpture of a man lost in thought 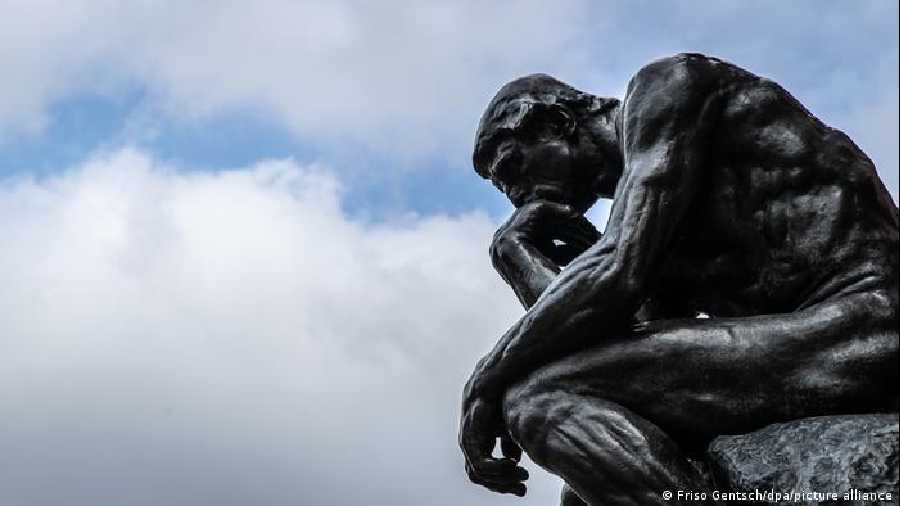 About 70 centimeters (28 inches) high, cast in bronze, a male figure sits on a pedestal. He's leaning over, with his head resting on the back of his right hand. Every muscle in his body is tense as he appears lost in thought.

There are about 40 bronze and plaster casts of Rodin's sculpture worldwide, plus countless copies in various sizes and materials, in museums, private collections and public squares.

The work, auctioned at Christie's on Thursday, sold for €10.7 million ($11.2 million). The posthumous cast from 1928, which was sold from a private collection that belonged to the late interior designer Alberto Pinto, was expected to fetch up to €14 million.

By law, all posthumous casts must be approved by the Rodin Museum in Paris, which is the only authority that can determine what is a true and original cast.

Casts of the "Moyen Modele," which is the 72-centimeter figure, are in Tokyo, Toronto, Rome and Copenhagen, while the original stands in Paris.

One cast that stood in the north tower of the World Trade Center survived the 9/11 attack almost unscathed but then disappeared.

Who is the thinker?

The iconic work might, according to one interpretation, represent the Italian poet and philosopher Dante Alighieri (1265-1321) contemplating humanity and its actions in his "Divine Comedy" vision of afterlife, as Rodin created the sculpture as part of the Gates of Hell, a commissioned work that stands at the entrance of the Musee d'Orsay in Paris.

According to another theory, the figure is Rodin himself, reflecting on his work.

Feet are too big

Auguste Rodin's figure represented something completely new at the time.

Until the end of the 19th century, sculptures and statues mainly represented perfection: women whose bodies corresponded to the ideals of beauty, with fine facial features and full hair, or tall muscular men with noble bearing. They typically portrayed deities and famous personalities.

But Rodin's "Thinker" was an unknown, nameless man with too-big feet and hands and a crooked nose, whose body looks peculiarly dented, yet muscular and sinewy.

Jean Baud, a French prizefighter and wrestler who mostly performed in the red-light district, was the sculptor's model for the "Thinker," but also for other figures Rodin created in this exciting new style.

Rodin placed a great deal of emphasis on a close study of the human body; his work includes many torsos and individual body parts such as legs — meant to represent walking.

The artist aimed to show the human body in motion, even if the figure was not moving. He focused on the representation of vital energy, rather than perfection in its conventional form.

So Rodin's figures fly, they fall, they stride or sit; they are with or without arms, legs a head — or they are complete, like "The Thinker."

Germany to return artefacts to Africa