Far removed from the proscenium

THEATRE: It was an unfamiliar experience watching this play, mediated by the camera, reminded of the distance and the pulsating presence of a live audience 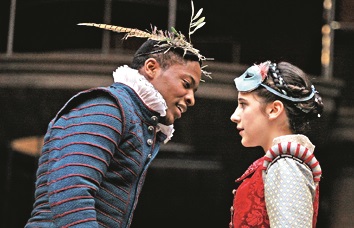 As we continue to fight a pandemic that forbids the liveness of theatre, Shakespeare’s Globe released online the famous tale of forbidden love — Romeo and Juliet, directed by Dominic Dromgoole and filmed by Kriss Russman. It was an unfamiliar experience watching this play, mediated by the camera, reminded of the distance and the pulsating presence of a live audience. The show opened with a bird’s eye view of the Globe as the audience making an assembly seems to mingle with the fictitious characters of Verona who pitch their camps on stage.

The Elizabethan worlds of the two rival families, the intermediaries and the commoners are rendered convincing by the design of the play. The art of enactment of literariness shapes the use of physicality, the projection of metaphors and the stab at communicating humour and pathos. Ellie Kendrick and Adetomiwa Edun as Juliet and Romeo wear an exuberant youthful energy but do not evoke the intensity of pain that simmers inside the tragedy. The minimalist use of lights and effortless musical transitions play out a sense of intimacy as the Shakespearean stage crawls into an audience seated in 2009, and I, shut inside in 2020, look fixedly at the digital screen.