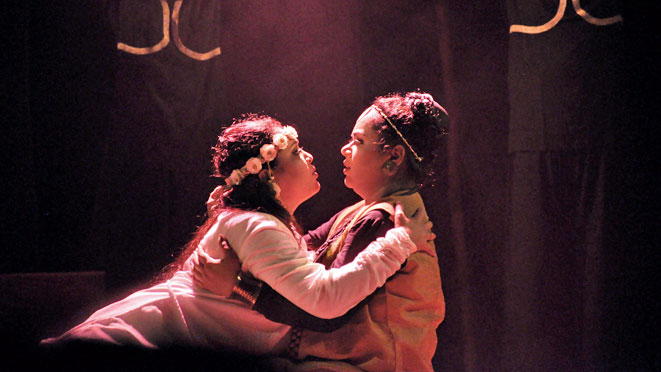 Androgyny is coming of age on the Kolkata stage. In recent years, DumDum Shabdomugdho Naatyokendra, led by Rakesh Ghosh, has been consistent in exploring the ambiguity of gender expression in performance arts. Ongoing debates about the LGBTQ community have facilitated the productions and helped sensitize the audience. With Sappho Chitrangada, it has attempted a much larger canvas. Premiered on January 10, this 80-minute production was staged for the eighth time at Tapan Theatre in south Kolkata on August 21.

As the name suggests, Sappho Chitrangada takes a cross-cultural look at the social construction of gender and the institutionalization of gender roles in ancient India and Greece. It relies on Rabindranath Tagore’s interpretation of the Chitrangada myth from the Mahabharata and the legends surrounding Sappho, the ancient Greek poet widely known for her gender-sensitive works. Ghosh gives his imagination free reign, making Sappho (Krishna Roy) meet Chitrangada (Lopamudra Guha Neogi) in Manipur, allowing them to fall in love, while Kshatriya Arjun and his Brahmin aides join forces to carry out State-sponsored terrorism in the region and the local king (Abhishek Mukhopadhyay) totters under pressure. It is left to Madan (Ranjan Bose), the king’s subordinate, to negotiate a truce and, thereby, separate the lovers.

Once one begins to accept the element of fantasy, Sappho Chitrangada is a smooth ride, ably supported by choreographed moves and musical interludes. Snatches from Chitrangada melodies were expected. Instead, the director used Harry Belafonte’s “Jamaica Farewell” as a leitmotif — indicating a sea voyage between the island of Lesbos and Manipur, touching down at Kingston — which underlined his penchant for hybridization.

Ghosh’s layered script kept referring to other literary masterpieces, but at times the mixing of languages was jarring. Occasional mentions of ‘fascism’ and ‘system’ did not quite gel. Ghosh should do away with his critical introduction to the theme before the show as it imposes the directorial vision upon the audience, discouraging a subjective interpretation. After all, he enjoys the support of Bose, whose maturity as an actor — this time playing a cunning agent with ambiguous sexuality — holds the act together.