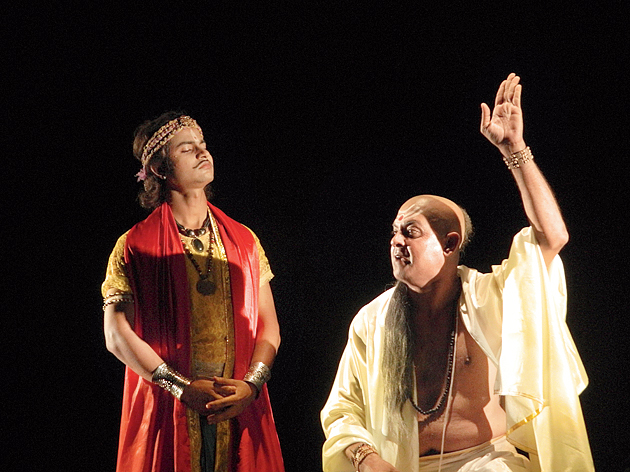 Contemporary Indian theatre has found Chanakya irresistible. Ever since Dwijendralal Roy installed him as the kingpin of Indian nationalism at its nascent stage in Chandragupta (1911), the proscenium has explored the master strategist in him from various positions. Visakhadatta’s eighth-century text, Mudrarakshasa, has seen many revivals. In the recent years, G.P. Deshpande’s Chanakya Vishnugupta subjected Chanakya’s political philosophy to thorough scrutiny. On the other hand, the hugely popular Chanakya, written by Mihir Bhuta and enacted by Manoj Joshi, has seen more than a thousand nights over the last 30 years. This lavishly mounted Hindi costume drama has not only legitimized the overtly ambitious nationalist politics of recent times, but also upholds the notion of Aryan India in no uncertain terms.

Chandernagore-based Yuger Yatri’s Kautilya Chanakya strikes a different note. Written by the veteran Sankar Basuthakur and directed by Ramkrishna Mondal, this Bengali play steers clear of stereotypes. It embraces the Buddhist version of the Chanakya legend instead. By foregrounding Chanakya’s (Ramkrishna Mondal) relationship with Bindusara (Sumit Saha), Basuthakur paints a mature and introspective statesman, who teaches his younger protégé to exercise restraint over aggression, embrace plurality over fundamentalism and ends up preaching ‘May your conscience be your guide’. Except for some minor faux pas, the drama succeeds in reconstructing the Chanakya image from the shlokas. By singing the glory of India under Maurya rule with medicinal achievements rather than military conquests, the playwright shifts the emphasis, yet distances himself from the absurdities.

Rabindranath Das designs a simple set with a wheel placed in deep centre stage. The light designer, Partha Chatterjee, crafts a decidedly dark world with limited resources. However, the glitzy court costumes were disappointing. The background score — a mix of A.R. Rahman tunes, Upanishadic hymns and other audio — attempts a sonic fusion to complement the melodrama.