Advertisement
Home / Culture / A doctor for the masses

A doctor for the masses

He specialised in emergency services but his heart lay in community work. Dr Soumyabrata Roy Chaudhuri has finally found his sweet spot 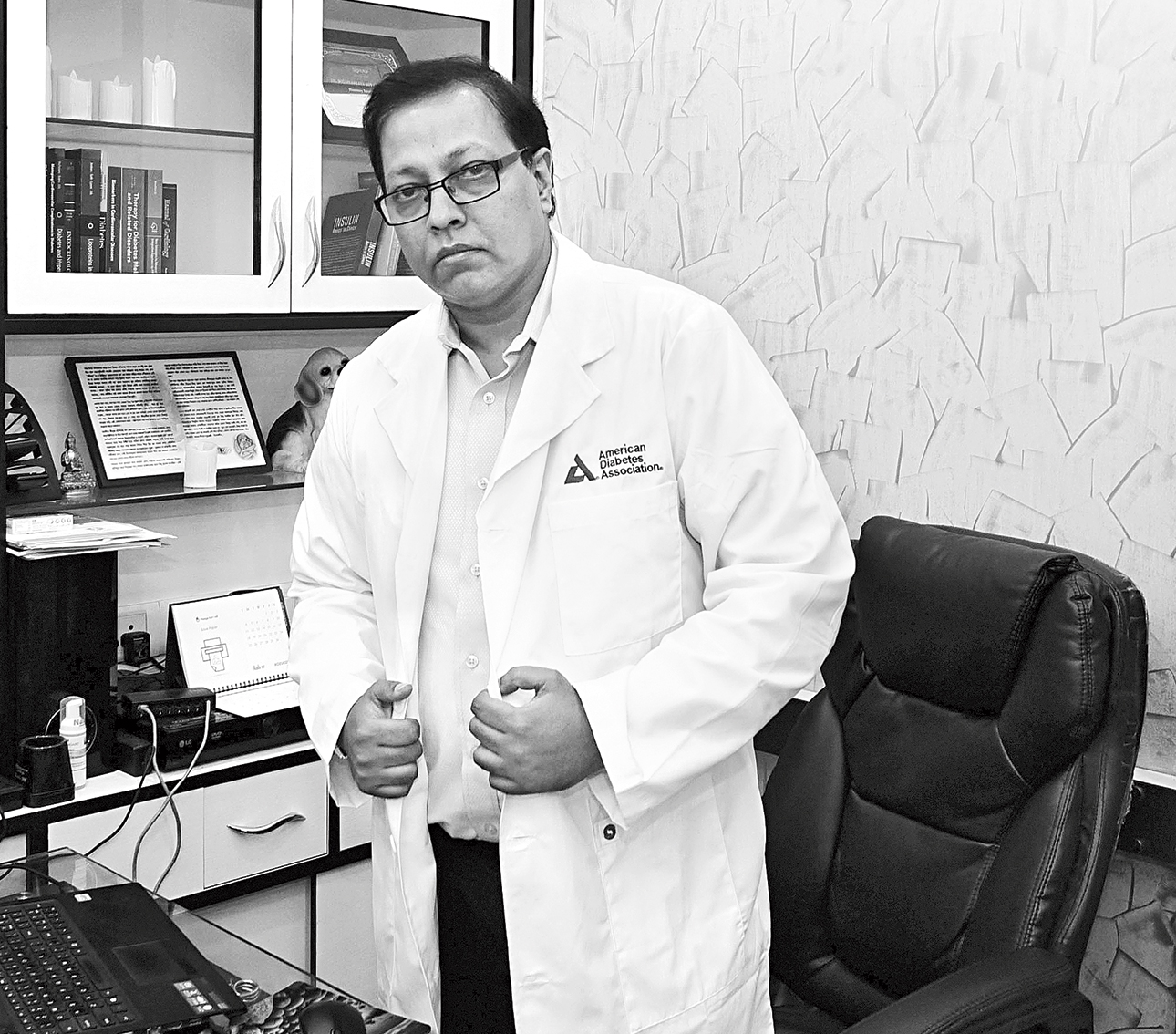 Born in the early 1970s to a technologist father and a homemaker mother based in Calcutta, Roy Chaudhuri wanted nothing. You might question that kind of a claim of course, but those were moderate times. After passing his Class XII exams, he took his medical entrance and joined medical school. (Once again, no drama.) Next, he went ahead and got himself some training in internal and geriatric medicine and eventually became a member of the Royal College of Physicians, UK.

To tide over the expenses, he gave private tuitions to medicine aspirants. “Even here I gained,” he says with a chuckle. “A lot of young people who cracked the JEE and are practicing today are my students.”

Somewhere between these natural career progressions occurred an incident that came to be embedded in his consciousness.

He was working the night shift at Calcutta’s R.G. Kar Medical College, when an elderly woman from a slum hunted him out to return the Rs 10 he had once paid for her electrocardiography or ECG and disappeared. “That incident,” murmurs the 46-year-old, and then cannot seem to complete his sentence. A while later, he says, “Even today I scan the crowds to see if I can find her.” According to Dr Roy Chaudhuri, it was that incident that drove him to serving more people.

In the course of writing this piece, I have shadowed Dr Roy Chaudhuri on different days at different places. And there is not a moment that is bereft of drama, I can assure you. He starts his day at 6am and by 9am he is in the outpatients’ department of K.P.C. Medical College in Jadavpur. In the afternoons, he regularly travels to the interiors — villages in the Sunderbans, interiors of Barasat — where proper medical services are wanting to date. In the evening, he is back in his chamber.

And then, of course, there is drama that continually disrupts this seemingly neat schedule. For instance, the day he is headed for a village about 15 kilometres beyond Rajarhat. I am with him. His phone keeps ringing and makes conversation difficult. Patients mostly, I gather. His tone is even always, unhurried, not the slightest hint of irritation or bother. I have started to tune out by now when he gets a call and his pitch changes.

The conversation, of which I can hear only one side, goes something like this: “Are you on your way from Siliguri? Or have you reached Calcutta? Okay. You are at the station? Oh, you are at the chamber! (Pause) I will be there, but you might have to wait a bit.” The next thing I know, he is calling up someone else: “I will be at the chamber at 6 (pm). Yes, I know it is not my day, but there is a patient who has come all the way from Siliguri and he is waiting there...”

Dr Roy Chaudhuri’s driver, Habibur Rahman, tells me this is no one-off. The previous week, it was someone from a village in Burdwan. Later, I learnt it was a patient with an obstructive airway disease and a problem of intermittent hyponatremia — low sodium content in blood — due to which he becomes drowsy, weak and incoherent. When he had one such episode recently, a primary care physician attended to him. Thereafter, upon slight improvement, he was brought to the outpatients’ department of a south Calcutta clinic. Says Habibur, “That day Dada had cancelled his engagements at that clinic as there was other work. But when he got the call and learnt how the family had hired a car to get to Calcutta from Burdwan, he rushed to attend to him.”

During the road trip and even a couple of times at his clinic, I see Dr Roy Chaudhuri taking out a khata or school kid’s notebook and scribble. “Field notes,” he tells me when I ask.

After the day’s running around, post-chamber, post-clinic, Dr Roy Chaudhuri routinely brushes up on his reading, flips through his khata and winds up by 2am.

Dr Roy Chaudhuri had originally wanted to become a general practitioner but was apparently disillusioned by the lack of faith shown in that particular creed. He tells me how one time a patient came to him to have his blood pressure checked. When he suggested an ophthalmoscopic examination of the eye and a urine test for protein, the patient rudely cut him short. He says, “In effect, he wouldn’t just let me do my job.” Dr Roy Chaudhuri was disheartened but now his mind was made up. He decided to pursue a career in emergency medicine with a specialisation in critical care following heart surgery.

But in his heart, he wanted to become a community practitioner and that philosophy coloured his work approach.

He realised in the course of his practice that a majority of patients undergoing treatment at hospitals suffered from a common ailment — diabetes. It was the illness underlying many illnesses, sabotaging the body circuit. He wanted to concentrate on the disease and its management. He obtained a master’s degree in diabetes care and a postgraduate certification in diabetes and endocrinology.

Someone, who knows Dr Roy Chaudhuri from his medical college days, talks about how he and a batchmate, Manosij Dhara, had helped fund another batchmate’s medical education when, halfway through the course, the batchmate’s family fortunes flagged. Dr Roy Chaudhuri’s old acquaintance, Tapan Dasgupta, a resident of Kalindi, tells me about the time when there was an outbreak of Hepatitis E at Chasir Math in northeast Calcutta in 2003-04. “Doctorbabu would serve patients till midnight, organise their admission into hospital when necessary.” Pijush Kanti Pal is another patient. He says how, in 2006, Dr Roy Chaudhuri pre-empted his heart attack at midnight and shifted him for primary angioplasty to a specialty cardiac centre — the deposit money, a six-figure amount, was initially paid by “Doctorbabu”.

Barun Ghosh, who is his assistant, says if someone gets his or her domestic help or someone in his or her employ to him, the doctor does not accept any fee. “He says the person who has brought the patient has shown enough care. By treating him free of cost, we can complete the cycle of goodwill in which the haves take care of the have-nots and provide them a form of social security.”

As he shifted his career from acute medicine to diabetes care, Dr Roy Chaudhuri realised that the need of the hour was not only proper treatment by community practitioners, but also awareness amongst people. He also realised that large-scale campaigns as well as free and early diagnosis would require finance, so he set up a voluntary organisation called Lake Town Synergy.

The first year, it was very difficult, donations were non-existent. Worried as he was, he began to search for new avenues and found that funds were available for continuing medical education (CME) programmes.

He started using this platform to organise the CME programmes, which facilitated the proper upgrade of general practitioners in the rational and up-to-date management of diabetes. Sponsorships for such events began to generate funds. The organisation now started holding fortnightly charitable clinics alongside the citizens’ forum.

Says Dr Roy Chaudhuri, “Type 1 diabetes is a challenge. It is a financial burden for the family and a source of psychological trauma for the diabetic child.” The organisation he runs adopted five diabetic children to whom he supplies the basal insulin and glucometer strips — which often are the greatest financial barriers in treating the disease. “The support will continue till they’re financial independent,” he says.

Along with his colleagues at K.P.C. Medical College’s endocrinology department, he has designed a course for general practitioners to update their knowledge on diabetes management and endocrine disorders in order to uplift the standard of diabetes care and management at the community practitioner level. His own little army at the clinic is also made up of regular people who have been diabetes-educated. Mita Dutta, for instance, teaches English in a school by day.

She tells me about the length Dr Roy Chaudhuri goes to — from identifying a diabetic child from a poor family in the Sunderbans in a hospital OPD to providing her support all through the year to treating to holding charitable clinics in remote parts of the state.

Dutta talks about how the doctor’s Sunday mornings are spent in taking classes for new diabetes educators. I start to ask her what he does with the rest of his Sundays when the man himself walks in on us. He says, “Beyond Sunday noon, I don’t meet any medical person.” Then adds, “In fact, I don’t even look at the mirror thereafter.”

Really, no appetite for drama.