Will prepare blueprint for companies looking beyond China: Sitharaman 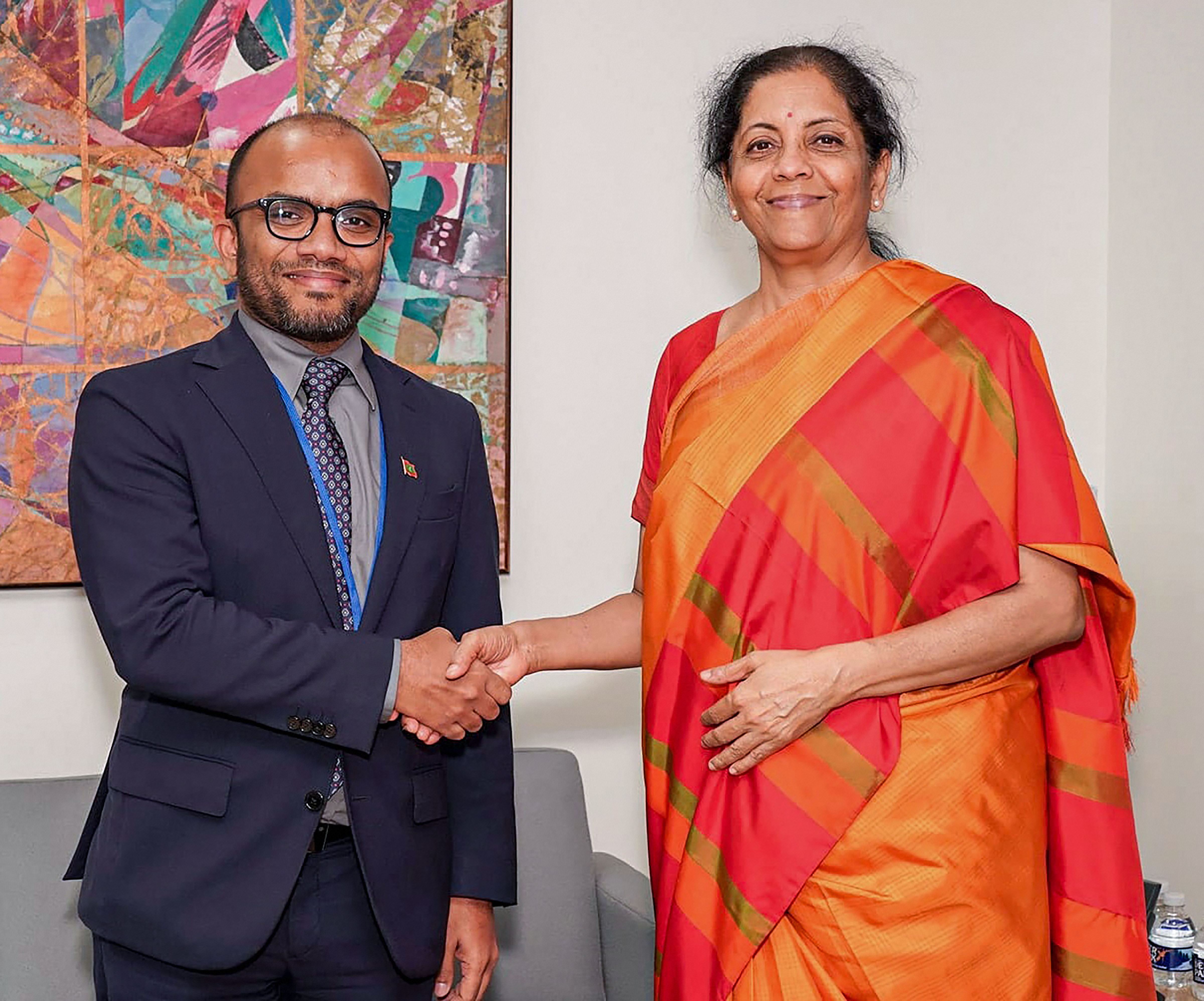 Finance minister Nirmala Sitharaman has said she will prepare a blueprint for international companies that are looking beyond China to make India as their preferred investment destination.

She said industry leaders who are contemplating getting their businesses out of China are 'definitely considering India as the pitch.'

Therefore, she said, it might be important for the government to now see and meet up with a lot of industry leaders and invite them to India.

'I'd certainly be doing that I go back and design in some way whereby I will identify those multinational corporations, all American businesses or any other country – European or a British origin – who are moving out of China or who probably are even contemplating,' she said.

'I will make a blueprint with which I will approach them and put forward to them as to why India is a far more preferable destination,' Sitharaman told a group of reporters on Saturday at the conclusion of her interactions at the annual meeting of the International Monetary Fund and the World Bank in Washington.

That could also be in specific areas in which India has common capacity ecosystem building, whether it is electronics, lithium ion battery or any other semiconductors, she added.

However, Sitharaman said the government's decision is not just going to be purely on the basis of what is happening presently between the United States and China.

'That could either aggravate the situation or probably just be an influence at some level. But the fact remains that there are companies which are looking at relocating for various other reasons also,' she said.

'That is why I gave that little fine line that I'm drawing about companies which would want to locate elsewhere outside of China. Even as I said that, I said that not every company wants to lock, stock and barrel get out of China, there are companies which will remain there to service the Chinese market,” the finance minister said.

'After all China is a very big domestic market and the their purchasing power, consumption style may be very different from what it is in India, but I'm making that margin already that companies will probably be there to service the Chinese market tension or not tension,' the Union minister said.

She said India wants to create an ecosystem to invite the companies to tap the country's market.

'I'm allowing that margin already. Over in about that for those companies, even if they continue to be in China but still would want to produce from elsewhere either to export or to capture a new hub, domestic market like India,' Sitharaman said.

'There was one thing very clear that India is still for them (companies), one of the biggest options to consider,' she added.

The minister said it is perceived that the opportunities in Vietnam are not that much attractive.

'In fact, today, one of the conversations that I was having with some of the bank and the government representatives was that even Vietnam now probably is getting saturated. They don't have enough manpower to address expansionary programmes of investment,' she said.

'So, given the fact that we've given concessional taxation approach to corporate incomes, corporate tax having been brought down and the problems that I've just mentioned about Vietnam, there's a higher chance that those companies, which are moving out those investments that want to get out to China, will certainly look at India,' Sitharaman said.

Sitharaman gave a clarion call for 'concerted action' in the face of global slowdown.

She also highlighted that the emerging market economies, in particular, face the challenge of achieving economic growth and inclusive development while pursuing sustainable financing.

Meanwhile, speaking on India-China trade deal, Sitharaman said the negotiations on the deal are going in 'full speed' and expressed hope that an agreement will be structured soon.

The ongoing trade deal negotiations briefly came up for discussion during a pull aside between Sitharaman and US treasury secretary Steven Mnuchin at the IMF headquarters.

Mnuchin is scheduled to visit India early next month.

'In fact, I broadly mentioned it to secretary Mnuchin, but that is something on which the commerce minister and Mr (Robert) Lighthizer (US trade representatives) are working. My inputs are that the negotiations are going in full speed and there's a great intensity with which both sides are engaging and hopefully the deal will be structured soon,' Sitharaman said.

India is demanding exemption from high duties imposed by the US on certain steel and aluminium products, resumption of export benefits to certain domestic products under their Generalised System of Preferences (GSP), greater market access for its products from sectors, including agriculture, automobile, auto components and engineering.

On the other hand, the US wants greater market access for its farm and manufacturing products, dairy items and medical devices, and cut on import duties on some ICT products. The US has also raised concerns over high trade deficit with India.

Responding to a question, Sitharaman said a totalisation agreement with the US has always been on the cards.

Totalisation agreement seeks to eliminate dual taxation with regards to social security and medicare taxes in the United States.

'One of the reasons why that was never responded to was that India did not have a social welfare net or social insurance cover for Indians in the nation. And therefore, if they had to give it, they wouldn't be given in the sense where would it be used? she said.

'Today, I think most private insurances or for many of the families which are below the certain level of income, Ayushman Bharat is a fantastic big coverage. There is also now a lot more private sector option for insurance coverage. So whether that has been factored in now in the negotiations on this particular thing, I'm not adequately informed,' Sitharaman said.

She said India in the past even, when she was the commerce minister, had put several arguments before, but that was repeatedly stonewalled over the health cover issue.

'I remember that. I've heard it at least twice in my negotiations on the totalisation,' Sitharaman said. It could be 'humongous amounts,' she added.

Most of the Indians working in the US unfortunately have no claim over their social security deductions, because there is a minimum period of at least 10 years, she said.

'It's so designed that you really can't benefit. And no one in any case does live for that duration in this country,' she said.

An official release issued said Sitharaman had a 'fruitful' dialogue with Mnuchin.

The two sides agreed to continue the dialogue in the first week of November during Mnuchin's visit to New Delhi, it said.