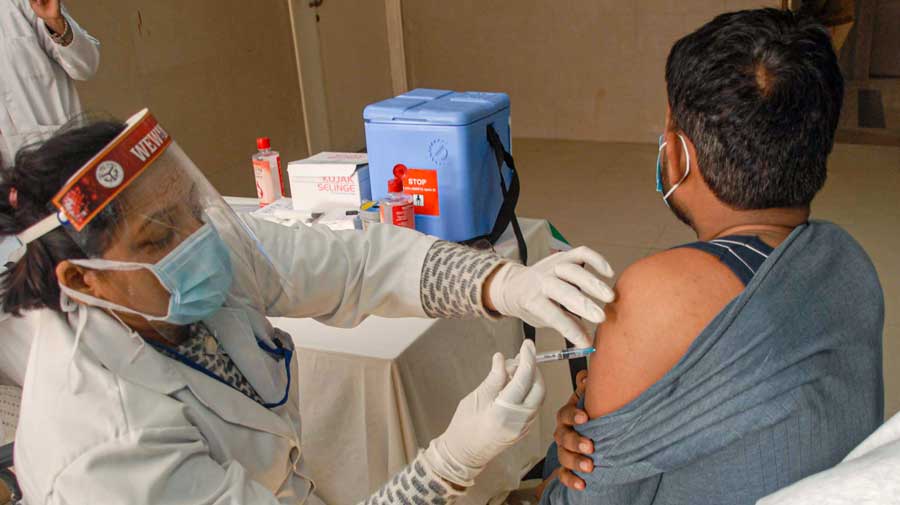 The Centre has announced a 137 per cent increase in the budget on “health and well-being” in the coming year, but four-fifths of this rise will be utilised for Covid-19 vaccines, water and sanitation initiatives.

The Union health budget for 2021-22 has proposed multiple new initiatives, including schemes to strengthen primary healthcare and critical care units in government hospitals, but several experts said the increase in allocation for health remains a meagre 9 per cent.

The Centre’s increased allocation for health thus remains insufficient towards the target of increasing its spending on health to 3 per cent of the gross domestic product from the current less than 1.5 per cent, experts and industry representatives said.

Sitharaman announced an outlay of Rs 64,180 crore for a new scheme called PM AtmaNirbhar Swasth Bharat Yojana that will over six years strengthen capacities of government-run primary, secondary and tertiary healthcare institutions across the country.

Immunisation with pneumococcal vaccines for children currently offered by the health ministry in five states would be extended across the country. This is expected to avert 50,000 deaths per year, she said.

Public health experts said the allocations to improve access to drinking water and sanitation would have impacts on health and well-being but are worried that the increase in the overall outlay is low.

“The core flagship programmes have received meagre increases. We don’t see the moves required to increase the public spending on health to 3 per cent of the GDP,” said Selvaraj Sakthivel, director for health economics and policy at the Public Health Foundation of India.

Indranil Mukhopadhyay, who teaches health economics at the OP Jindal University, said the Centre’s health budget should increase by at least 25 per cent every year over four or five years to achieve the 3 per cent target. “The actual increase this year is about 9 per cent,” he said.

The finance ministry’s Economic Survey released last Friday had underlined that increasing government spending on health to 3 per cent of the GDP would reduce out-of-pocket (personal) expenses on healthcare in the country from the current 60 per cent to 30 per cent.

“The increase in allocation to health is marginal and the total outlay for health as a percentage of the GDP remains dismal,” said an executive with the Organisation of Pharmaceutical Producers of India, an industry body representing mainly foreign drug and vaccine makers.

The Population Foundation of India, an NGO, said it is concerned about a 35 per cent reduction in the outlay for a scheme that funds procurement and distribution of contraceptives — from Rs 600 crore in 2020-21 to Rs 387 crore in 2021-22.

The new initiatives in health also include plans to establish regional centres of the National Centre for Disease Control, New Delhi, and the National Institute of Virology, Pune.