Different high courts have interpreted the rule in a different manner

The Supreme Court will decide on the modalities of arresting an entity for GST evasion as different high courts have interpreted the rule in a different manner.

The Bombay high court had granted protection from arrest, while the Telengana High Court had interpreted the rules differently and had refused protection.

It was the Centre’s plea against the Bombay court verdict, which was taken up by a vacation bench comprising Chief Justice Ranjan Gogoi and Justice Aniruddha Bose on Wednesday.

The court agreed to examine the powers of tax authorities to arrest an individual for GST evasion saying that different high courts have taken divergent views on the issue and it was necessary to clarify the position in law.

“Issue notice returnable in four weeks. As different High Courts of the country have taken divergent views in the matter, we are of the view that the position in law should be clarified by this court. Hence, the notice,” the bench said. 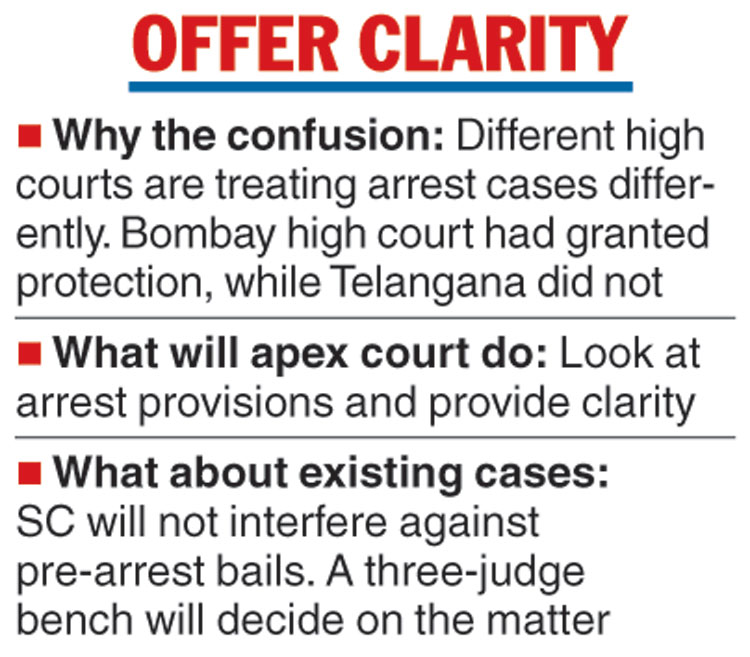 The court said at this stage it would not like to interfere with the pre-arrest bails granted to these individuals by the Bombay high court. But “We make it clear that the high courts while entertaining such request (protection from arrest) in future, will keep in mind that this court by order dated May 27...had dismissed the special leave petition filed against the judgment of the Telangana high court in a similar matter, wherein the High Court of Telangana had taken a view contrary (refused to grant protection from arrest) to what has been held by the high court in the present case”, the bench said.

The bench listed the batch of petitions before a three-judge bench to decide the question of law on the power of arrest.