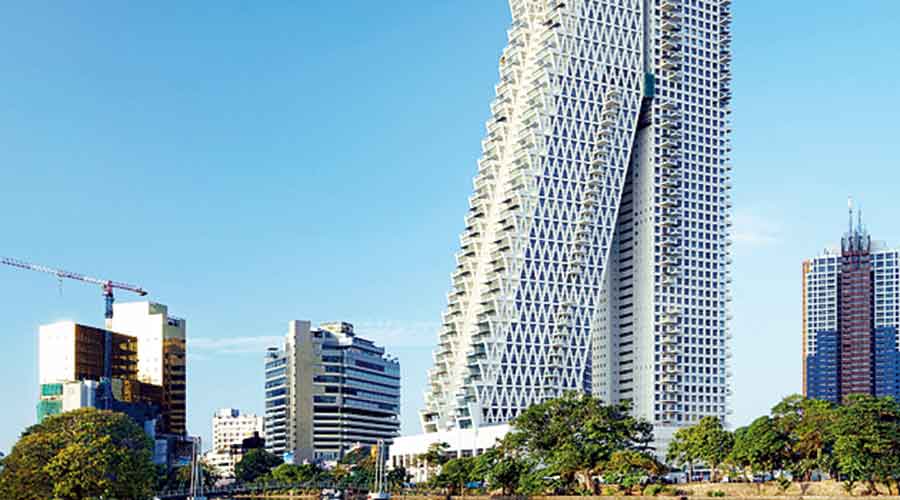 Two strands of a bruising court battle are looming on either side of the Palk Strait as a clutch of top builders from Calcutta mount legal challenges to claw back at a prestigious development in Colombo.

Multiple cases are being fought before the company law court in India and the commercial court in Sri Lanka over the fate of the $300-million Altair project which has been declared as a ‘flagship foreign investment project’ in the island nation.

The first round in what appears to be a long battle has gone to the challenger Jaideep Halwasiya who was granted a stay by the National Company Law Appellate Tribunal (NCLAT) over his ouster from the board of the Indian firm which used to be the main promoter of the Sri Lankan subsidiary which is building Altair.

However, Halwasiya may have to toil hard to maintain the early lead as the Commercial High court of Colombo is ready to hear a case filed by the Indian parent to challenge the manner in which it has been reduced to a minority in Altair after the Supreme Court of Sri Lanka paved the way for the hearing on September 8. The Commercial High Court in Colombo could hear the matter as early as Monday or Tuesday while the NCLAT order was delivered on September 4.

At the heart of the dispute is a change in ownership of the Sri Lankan company, Indocean Developers Pvt Ltd (IDPL), the promoter of Altair.

Calcutta-based AA Infraproperties (AAI) used to own 100 per cent share of IDPL. Its stake is now down to 13.84 per cent after Halwasiya issued fresh shares to entities linked to him.

South City Projects (Kolkata) Ltd, which holds 87.5 per cent in AAI — the remaining 12.5 per cent is with Halwasiya — claims that the issuance of shares in IDPL was an act of fraud perpetrated by Halwasiya to wrest control of Altair.

SCPL, which is owned by top city builders Sushil Mohta, Pradeep Sureka, Jugal Khetawat, Rajendra Bachhawat and Emami Group, has in turn lost control of Altair — two towers leaning one over another overlooking the sea — which is nearing completion after at least two years of delay.

A bench comprising acting chairperson Bansi Lal Bhat overturned an order of NCLT, Calcutta, which declined to grant an interim stay to Halwasiya plea to challenge his removal from AAI via an extraordinary general meeting of January 4 and the induction of three additional directors by an AGM on September 24, 2019.

While returning the matter to the lower court, NCLAT observed: “We are of the opinion that the impugned order suffers from (a) grave legal infirmity besides factual frailty. (The) Same cannot be supported. The appeal is allowed and the impugned order is set aside.
Appointment of respondents No. 4 to 6 as directors and removal of the appellant as the director is stayed till the decision on the company petition by the tribunal.” AAI had sought to remove Halwasiya from the board after the change in shareholding of IDPL came to light.

AAI had moved Commercial High Court in Colombo to challenge the dilution of their equity interest in IDPL. However, it now appears that the court has to first adjudicate on who represents AAI after the NCLAT order. There is only one director representing the interests of South City promoters after the appointment of three directors were stayed. The other director is Halwasiya himself.

AAI is challenging the validity of a power of attorney purportedly granted to Halwasiya in 2019 to represent the Indian parent in Sri Lanka.