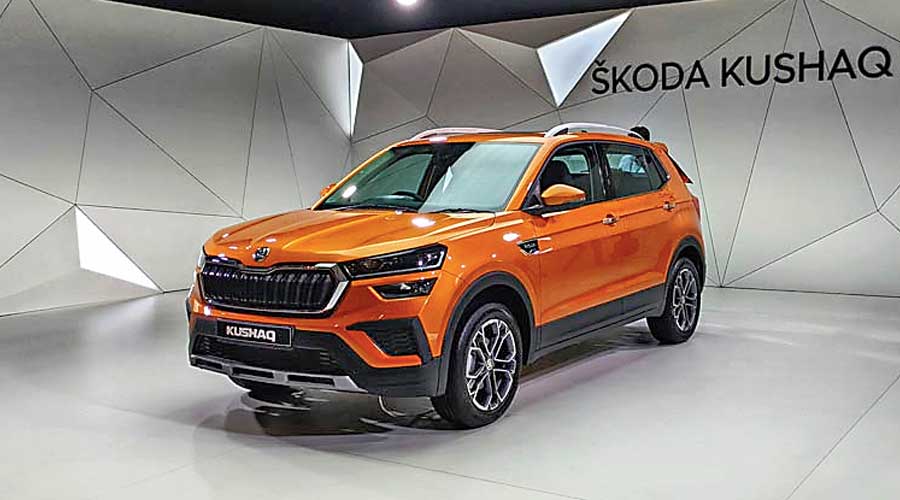 Skoda Auto is planning to introduce a compact SUV and a compact hatchback based on its localised platform and a locally manufactured engine.

“We do have a platform that is highly localised and a locally manufactured turbo-charged stratified injected (TSI) engine that will enable us to enter these highly competitive segments,” Skoda Auto brand director Zack Hollis told The Telegraph after the launch of its mid-sized SUV Kushaq late last month.

“We are serious about the Indian market and we are here for the long-haul. If you see the bookings now for the existing models, they are already at the same level as in January this year.

“We have confidence in the economy in the long term. The Indian economy will get back in track and probably grow faster than it did before the pandemic.

“A growing economy gives people confidence to buy high priced assets, large capital items such as cars and by 2025 we will be achieve sales of 100,000 units,” said Hollis.

When asked if the company’s sales were on track even after two waves of the Covid pandemic, Hollis said: “We aim to sell 30,000 units by 2021. A majority of that will be Kushaq. But we were able to launch the Kushaq only now. So, we will see more sales in the second half than the first. By 2022, we will more than double the sales.”

On the response to the fourth-generation Octavia, the director said: “It is far superior than the outgoing car. It is giving competition to German luxury cars while being 20 per cent cheaper. We plan to sell 150-200 Octavia per month and we are on track to achieve that.”

The company is due to launch a new mid-sized sedan soon and it feels demand in the sedan segment will grow with the launch of products.

“It is not that a segment grows only with demand. Often new products lead to the growth in the segment. Sub-4 metre SUVs have grown hugely because competitors brought in several products. Similarly, we think our products in the sedan segment will lead to its growth,” said Hollis.

Lack of diesel powertrains will not affect Skoda’s SUV sales because of its TSI engines. “We have two outstanding TSI engines. The performance of our existing models with TSI engines has been excellent. Superb has a 30 per cent segment share. Both with Rapid and Superb, we are selling more TSI engines than we sold petrol and diesel combined.”

Besides, he said, the long-term outlook for diesel is dismal worldwide. “Diesel is seen as highly polluting and by 2025 we will see legislation that will make diesel powertrains even more expensive. Our TSI engines are far superior, fuel efficient and future ready,” said Hollis.