Baba Ramdev-led Patanjali plans to double its sales to over Rs 20,000 crore in the current fiscal, open a chain of restaurants and invest around Rs 5,000 crore to set up facilities across the country. 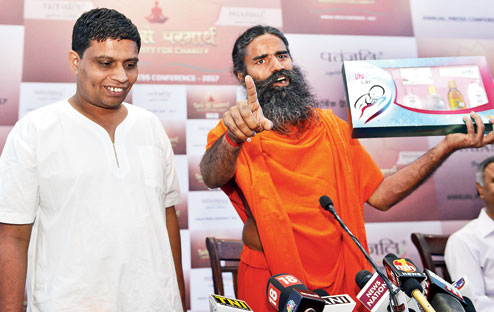 New Delhi, May 4 : Baba Ramdev-led Patanjali plans to double its sales to over Rs 20,000 crore in the current fiscal, open a chain of restaurants and invest around Rs 5,000 crore to set up facilities across the country.

Yoga guru Ramdev today asserted that "we would grow more than double this year... By next year, Patanjali would be in the leading position and in most of the product categories, it would be number one". He said Patanjali was aiming to become the largest Swadeshi company in the next 1-2 years.

The group, which has built a consumer products business challenging Nestle, Unilever and Colgate, plans to go after restaurant chains such as McDonald's and KFC.

Ramdev said Patanjali was working on a blueprint for a restaurant chain. "There is a proposal. It is being looked at by the senior management, but it has not been finalised yet. We are working on the business plan and its branding. So, don't be surprised if you find one day that Patanjali restaurants are serving nutritious and safe food in your neighbourhood. We will venture into the segment very soon."

Harminder Sahni, founder of Wazir Advisors, said: "Serving a packaged product is one business and running a restaurant is a very different ball game as same quality has to be provided each time by trained staff."

Comparing his products to global brands in the country, the yoga guru said: "In India, FMCG has meant multinationals so far. Patanjali has broken that monopoly. We are not a corporate house. We have good quality, affordable prices, and are ploughing back profits for product innovation."

"We are going to look at an e-commerce strategy and focus on strengthening our exports to at least 10-12 countries," Acharya Balkrishna, Ramdev's disciple and co-founder of Patanjali Ayurved, said.

A study by Assocham-TechSci Research said Patanjali Ayurveda has turned out to be the most disruptive force in India's fast moving consumer goods (FMCG) market.

Patanjali saw a whopping annual growth of 146 per cent in fiscal 2016 on a turnover of $769 million, while its peers such as ITC, Dabur, HUL, Colgate-Palmolive and Procter and Gamble struggled to reach even a double-digit growth. In 2016-17, Patanjali Ayurved contributed Rs 9,634 crore to its turnover, while Divya Pharmacy, which manufactures ayurvedic medicine, had clocked Rs 870 crore sales.